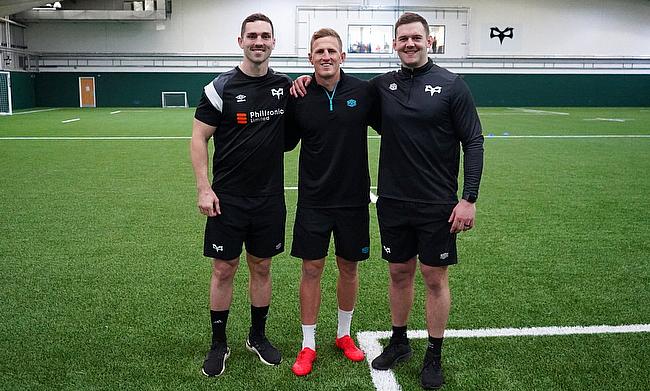 Ben John is explaining his decision as to why he decided to bring rugby back into his life.

At the age of 27, and following a year out of the game after suffering a series of head injuries, the Ospreys back made the choice to retire from the sport.

“When I first retired, I went into personal training,” says John. “I had two years virtually of no rugby at all. I didn’t watch any rugby or anything like that just because I was just so busy!”

But that close bond he once had with rugby was to be reignited. If there is a silver lining to take away from the Covid-19 pandemic, then maybe John’s reintroduction to the sport is one of them.

After leaving the personal training world behind in September 2020, John is now thriving as a skills coach and a content creator under the title of ‘The Rugby Trainer.’

“I would have been happy and excited with what I was doing with personal training,” adds John. “The gym [Manor Gyms] that I was working at was amazing as well, but the lockdown gave me an opportunity to have a bit of time to just rethink what I wanted to do.”

His reintegration back into the rugby bubble was a gradual one. Due to the concussions he experienced during his playing days, the now 30-year-old says he cannot play full-contact rugby so opted to get involved with tag rugby team, The Cowboys.

A coaching opportunity also cropped up at Old Alleynians RFC in south-east London and with ‘The Rugby Trainer’ concept following closely behind, John had now surrounded himself with rugby again.

“When I was personal training, I was literally in for 6am and I was coming home at 9pm,” says John. “I love working hard and working long hours and putting a shift in. I think it is something I picked up from my rugby career if I’m honest and that has helped with what I am doing now.”

Listening to John, you get the sense he has always been self-aware when it comes to improving, a trait he later admits he had during his professional career with the Ospreys.

His passion for analysis and skills highlights why ‘The Rugby Trainer’ is continuing to grow, and John’s affiliation with his tag rugby team and Old Alleynians also underlines this.

As he began reconnecting with rugby, John stumbled across Veo - a global leader in AI-powered sports recording and analysis - and he decided to use one of their cameras in training sessions and in match scenarios.

“I just wanted to get back into rugby and I saw Veo and I thought it would be quite cool to test it out because I had done a lot of analysis with being a rugby player myself,” John continues.

“I started playing rugby again and I knew Veo might work so I tested it out down the park and it was amazing! I was blown away by how easy it was to handle, how quick it was to set up and how easy it was to process and upload online and then share it with the players.

With Veo and video work ticking a lot of boxes for John, it is no surprise the former centre shaped this into a career that is now going from strength to strength.

With the help and reassurances from ex-teammates such as James Hook, Rhys Webb, Ashley Beck and George North, his rugby focused drills have led to over 80,000 people following his work on Instagram.

“Everything slowed down during the lockdown, didn’t it?” John says. “Everything turned to online. I had a bit more time to myself and I just started doing a little bit more rugby content. I teamed up with Rhys and Ashley and we did some online rugby skills. The skill element, that is something I’ve always been passionate about since I was a youngster. I just started to get the buzz back for rugby.

“Rhys and Ashley have been a massive help especially with all the coaching side of it because I was out of rugby for two years and coming back with them was awesome. First of all, you miss the social side of it so just being able to catch up with the lads, speak to them, talk rugby with them was quite nice.

YES! here it is, #TheGameChanger GIVEAWAY with @HarlequinsWomen
& @jessbreach
WIN 4x TICKETS to the Game Vs @SaracensWomen on the 5th of February and get your hands on a Signed Quins Shirt??
All you need to do is fill in the form belowhttps://t.co/aMZ4c1vIvO pic.twitter.com/3s9iCmVbp8

“As well as that, I had a lot of the other players come on like Leigh Halfpenny, James Hook, a few of the English lads as well and girls which was awesome. From there, it has just grown and grown and I have started to get a lot more of the professionals in and it’s making a big difference.”

John’s regular posts on social media - as well as his interactions before, during and after sessions - seems night and day from where his relationship was with rugby back in 2019.

He admits sinch the launch of 'The Rugby Trainer', he has started to watch a lot more rugby again, keeping a keen eye on the Gallagher Premiership and of course, Ospreys, where he made 79 appearances for the Welsh region.

And John will be making the trip back to South Wales this weekend to watch the national side face Scotland in the Six Nations.

During his career, John did grace the turf at the Principality Stadium as part of Judgement Day [where all four Welsh sides play] and whilst he expects the atmosphere in Cardiff to be as raucous as ever on Saturday, the state of the game in Wales is becoming increasingly concerning.

The passiveness of the Six Nations champions in their opening defeat by Ireland - less than 24 hours after the U20s were hammered 53-5 - sounded the alarm bells once again about the direction Welsh rugby is heading in.

The progress of Ireland’s national side is mirrored by their provinces’ displays both domestically and in Europe, with Leinster very much the nucleus of Andy Farrell’s squad.

Everything is aligned and transparent for the Ireland boss whereas for Wales, the fractured relationship between the WRU and the clubs might take a while to piece back together.

In the past decade, the performances of the Welsh regions have been underwhelming, but when it comes to the Six Nations, Warren Gatland - and last year Wayne Pivac - have managed to guide Wales to Grand Slams and titles despite the issues behind the international curtain.

The successful teams which Wales have assembled over the last 10 years have been littered with star names but because a clutch of those standout individuals are missing from Pivac’s current squad, it has now exposed a player pathway problem which John feels needs to be resolved.

“Obviously we do need to improve the results of our regions,” John says. “The Irish teams are all doing well and that is starting to transfer, starting to apply to the Irish national side. I know we’ve gone through 10 years of doing really well, but it is now time to look ahead and keep developing so it is definitely something the WRU does need to address.

“I think they have to focus on how we capture a lot more players and have a player pool as well. I think even if Wales somehow won the Six Nations, I still think we need to address this because we want to be looking for the future. We want to know who is next, who is coming through and it is something every nation keeps an eye on.”

For John, it is not all doom and gloom despite a ‘far from ideal’ start to the tournament. He feels the extensive injury list which Pivac is having to deal with actually gives Wales a chance to blood some new names with the World Cup just under 18 months away.

“I think it is a great opportunity for players that are playing now to have a bit of experience,” he adds. “Yes, you can look at the depth but there are a lot of new faces and especially with the World Cup coming soon, it is actually a good period now to build on that. We don’t really want this six months out from the World Cup.

?We're really excited about getting out in front of a full house at Principality Stadium for our first home match of the 2022 Guinness Six Nations. There is nothing better.?

?Hear from head coach Wayne Pivac as he discusses his selection for Scotland this weekend. #WALvSCO pic.twitter.com/dBFH0oJ39p

“Guys like Taine Basham have and can just step it up, for example. Over the next few weeks, the team is going to get a lot more settled, they will get used to playing with each other. The combinations as well, it does take time.”

The catalogue of absentees in the Welsh camp meant one of the ‘combinations’ which Pivac tried last weekend was shifting Josh Adams from the wing to outside centre alongside Nick Tompkins.

John sympathised with the British and Irish Lion who was left isolated on several occasions in Dublin, but the Wales boss has reverted to a more familiar partnership for their crucial meeting with Scotland.

Owen Watkin will replace Adams - who is ruled out due to a tight calf - whilst Jac Morgan will win his first senior international cap. Ross Moriarty joins him in the back-row and Alex Cuthbert is selected on the wing in one of four changes.

“Whatever the team, I think with the lads being at home, I think it has been a fortress for years,” John concludes. “I haven’t been to a Welsh home game with a crowd for a long time so I am seriously excited and I just think with it being the Six Nations and with it being in Cardiff, I think it is going to get the players and everyone going which can only be a good thing.”

Make sure you check out Veo's joint competition with @TheRugbyTrainer on Instagram for your chance to win an amazing prize. Click here to find out more