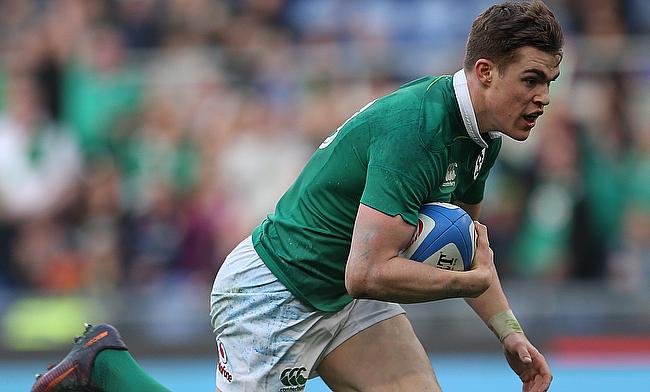 Garry Ringrose was one of Ireland's try-scorer
©PA

Ireland kick-started their Six Nations 2022 campaign with a 29-7 win over Wales in the opening round at Aviva Stadium on Saturday.

The result means Wales remain without a win in Dublin since 2015 as Ireland continued from their impressive autumn internationals campaign where they won all the three games including a victory against New Zealand.

Playing in front of a full packed Aviva Stadium for the first time in two years, Connacht wing Mack Hansen straightaway made an impact as he collected a perfect pass from skipper Johnny Sexton and created a space for Bundee Aki to score in the third minute. The Irish skipper also followed with the conversion to make it 7-0.

Sexton missed a couple of penalty chances as his kicking was off range but made amends with a three-pointer in the 19th minute as the opening quarter ended with a 10-0 lead for the hosts.

The highlight of the opening half was Irish defence that held firm and managed not to concede a single penalty to keep Wayne Pivac's men scoreless.

Ireland extended their momentum into the second half as Sexton kicked a penalty to the corner and Andrew Conway powered his way over in the right corner at the back of a line out after a smart break from the Irish skipper, who also landed the conversion without a mistake to make it 17-0.

The 48th minute saw Wales reduced to 14 players temporarily with Josh Adams sin-binned for a dangerous tackle on Sexton and with the numerical advantage on their side, Ireland pressed forward as Jamison Gibson-Park sent a looping pass for Conway to score his second in the 51st minute and Sexton kicked the extras to make it 24-0.

The bonus point for Andy Farrell's men came in the 60th minute as Hansen and Aki combined to send Garry Ringrose over the line but the conversion went wide as Ireland went on to score 29 unanswered points.

Just as Ireland were looking for a clean sweep, Taine Basham helped Wales avoid embarrassment slightly as he pounced on a loose ball to touchdown and Sheedy kicked the conversion as Farrell's men completed a 22-point victory.