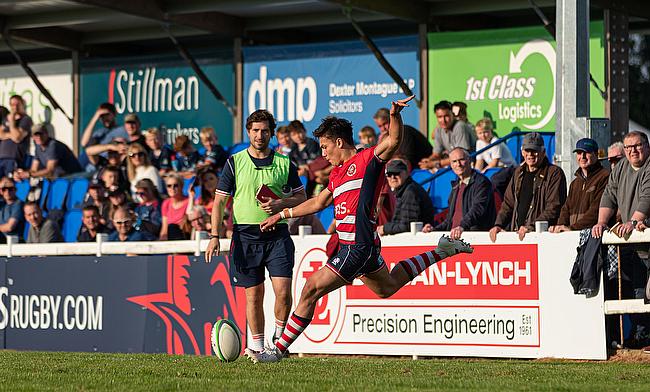 At the beginning of the month, Marcus Smith left The Stoop with the cameras firmly fixed on him and his Harlequins teammates.

Bristol Bears had stunned the English champions in the opening 20 minutes of their Premiership clash, but by full-time, Quins were basking in the glory of a remarkable victory with the mesmerising brilliance of their fly-half firmly in the spotlight.

Less than 24 hours later, another Smith was donning a No.10 jersey in a heavyweight tussle, but this time it was at the top of National One.

Rosslyn Park’s meeting with Rams RFC was billed as the standout fixture of the weekend in the third tier, and it lived up to the hype.

Rams’ dazzling first-half display was ultimately enough to secure a 24-21 win, but one of the tries which Park scored in defeat certainly sparked some conversation.

Smith x Cokanasiga has a great ring to it ??

Catch up on all the action from Round 6?? by subscribing to The National League Rugby Review Show ??https://t.co/nRgehxuxxx pic.twitter.com/g7htEPB6yb

National League Rugby’s Twitter account posted a try from Phil Cokanasiga, who is currently on loan from London Irish and is also the sibling of England star, Joe.

But it was a pass by Luc Smith, younger brother of Marcus, which caused a ripple of excitement on social media.

“I don’t really take much notice of it,” Luc tells TRU. “If there is that link which is made, I am not fully aware of it and I try to go about my own stuff without taking too much notice of that because in ways, I want to be my own player.”

As much as Smith deflects the comparisons between himself and his brother, they are hard to ignore. Having excelled at Brighton College, the 20-year-old was also on the books at Harlequins.

Added to these parallels are his mannerisms and attributes on the field. “It is just his ball-playing ability and his physical presence as a 10 on the pitch which stand out,” says Rosslyn Park Director of Rugby, Kieran Power.

“He obviously sees what his brother does and Marcus has come down to watch us a couple of times this season. Luc is a guy that can create something out of nothing just out of his natural instinct for the game and being able to beat defenders one-on-one. We have got a backline that likes to play and throw the ball around and that is Luc’s mentality.

“He has also got a pragmatic head coach and Director of Rugby who are both forwards so sometimes there are hearts in mouths when he does start to run the ball! We nurture him and say, ‘have a crack when you think it is on’, but don’t kill us at the same time!”

However, Power is keen to back up his No.10’s original point about being ‘his own player’.

For now, Smith has decided to go down a slightly different route. He is currently in his third year at Imperial College, London studying Civil Engineering and whilst his degree is a key short-term focus, playing rugby at a high level remained on his radar.

The fly-half linked up with Rosslyn Park two years ago, but due to a couple of injuries - and the cancellation of a full season because of Covid-19 - Smith only made his 1st XV debut this term.

“This season so far has been really good,” adds Smith. “I have been more involved with the first team and I have got to know a lot of the boys a lot more. The great coaching staff at Rosslyn Park has been good for my development and I have really enjoyed playing this standard of rugby in a very good league.

“It is a big step up for me from school rugby. Feeling the difficulty of each game week in, week out, you don’t really get a game where you are going to find it really easy. The away trips make it tough as well rather than playing other London clubs all the time. You do have to do these three, four-hour train journeys which add to the whole experience!”

Smith has featured in five of the club’s fixtures so far this term and Park currently sit third in the league standings ahead of a mouth-watering clash with league leaders Cinderford this weekend.

Whilst Smith hopes to play his part in the National One title race, his brother will be continuing his extraordinary rise having been selected for the upcoming autumn internationals.

Back in June, the Smith clan - father Jeremy, mother Suzanne and siblings Luc and Thomas - were all at Twickenham to see the Harlequins star steer his side to a Premiership title before witnessing his England debut against the USA just over a week later.

But whilst the rest of his family were back at ‘HQ’ when the fly-half found out he was going to be a British and Irish Lion during England’s fixture with Canada, Luc was roughly 200 miles away in Macclesfield representing a Philippines development side in a Sevens tournament.

“I have recently been part of the Philippines rugby programme,” says Smith, who was born in Manila. "Since then, I have tried to help in the UK by playing in tournaments like this and trying to find people of Filipino heritage. We want to get them involved in the programme as sort of a recruiting thing for the full national team, but also just to involve anyone who wants to get involved who is of the same heritage as us.

“That day, my phone just went nuts with my mates messaging me about Marcus’ call-up so that was pretty amazing as well! “Macclesfield is where I heard! The rest of my family were at Twickenham watching the game so it was pretty crazy!”

Many have marvelled at the talents of Smith over the last 20 months or so, but Luc is quick to point out that his older brother’s work ethic is a core reason for why the 22-year-old finds himself at the top of the game.

“Behind all of the good performances he has, he definitely works very hard at it,” Luc adds. “On the training ground, doing his kicking practices, extra running sessions, passing and working on those skills but on top of that, he does a lot of analysis.

“He watches a lot of Super Rugby. He watches highlights and masterclasses of players he has sort of found inspiration from so he is doing a lot behind the scenes both on and off the pitch. That contributes to his performances rather than it all coming out of nowhere as some people might think.”

And Luc is also very much a student of the game himself: “I have always watched rugby from a young age with my older brother and my younger brother. Even when we were younger, you are not actively trying to analyse it, but you are subconsciously taking all that info in so it gives you that feel for the game which I think I have benefitted from.

“Now that I am playing in National One, I feel like I need to get my game management up to scratch. At school rugby, that sort of management is not as important. Watching Premiership games now, I try to dissect what the fly-halves are thinking, how they are sort of managing the game and trying to think, two, three, four phases ahead. I am trying to add that into my game more and more.”

Smith cites Leicester Tigers’ George Ford and Scotland star Finn Russell as two examples of different fly-halves he analyses, but picking the brains of his older brother is an invaluable resource for the Rosslyn Park No.10.

“We still do kicking sessions together when he comes home or if I can get up to where he lives, so we still do those sessions quite frequently,” Smith adds. “He’s always open to giving me all the tips that he has learnt. He is obviously working with some of the best coaches and players so he passes on that fine detail to me which helps a lot.

“We sort of have an open dialogue and we always bounce ideas off each other. I am giving him feedback as well with his games! We are there to help each other.”

Smith’s development at Rosslyn Park is also aided by, Veo, a global leader in AI-powered sports recording and analysis.

His Director of Rugby explains how the National One side benefits from having this technology readily available to them: “Veo is hugely important for us to be able to allow our players the accessibility to watch their games back with ease to help in their development," Power says.

"This for us allows a certain amount of player empowerment by self-coaching which can then be backed up with player-coach 1-on-1’s which we feel is integral in making sure we can get the best out of our players at all times."

Smith’s commitment to improving his game will undoubtedly be boosted by Veo, and Rosslyn Park will be hoping their No.10 can continue to enjoy his rugby for the National One title challengers.

In 2019/20, the curtailed season denied the club a possible shot at promotion as they, along with Rams, were battling it out with Richmond for the title.

When the first wave of Covid-19 struck in the UK, Park sat second in the league standings, but the RFU’s best-record playing formula meant the London-based outfit finished third behind their nearest rivals.

With that in mind, both Smith and Power feel the disappointment of the previous campaign has galvanised the team to fight for the title once again.

Following a weekend off, we are back at The Rock this Saturday for a huge clash with league leaders @cinderfordrfc.

“A lot of the boys felt that had the season finished off properly, we would have been in with a good shout of possibly competing with Richmond to go up,” Smith says. “Essentially, the main goal is to really challenge again this season because they did feel a bit hard done by so I think it has spurred everyone on to work harder for the end cause.”

“I think when we were sat second and the league was cut short, the formula sort of aggrieved a lot of us,” Power added. “We all thought we had done more than enough to come second so the formula sort of left a bad taste in the mouth after what was a really enjoyable season.

“Our main aim is to do better than third at this moment in time because we feel we were robbed of that second place the last time out so we will keep pushing for that.”

As October draws to a conclusion, Rosslyn Park are preparing for some crucial weeks ahead as the National One season approaches its midway point.

On a personal note, the club’s No.10 is looking forward to playing his part for one of the title candidates and if Park do go on to have a successful campaign, the name ‘Smith’ could continue to grab the headlines in more ways than one.