Aviva Premiership XV of the 14/15 season 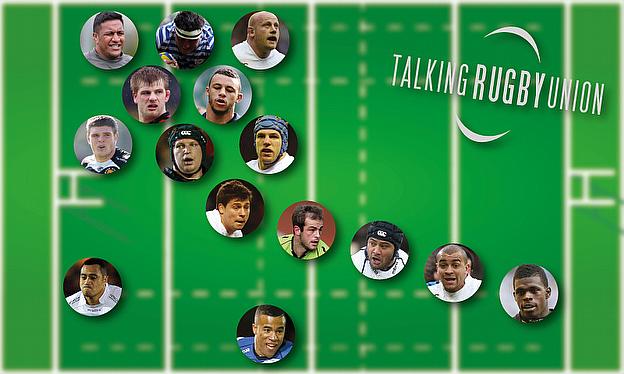 It’s been a stellar year for the competition and although London Welsh’s demise has made the relegation battle fairly lacklustre, the title race and contest for European Rugby Champions Cup qualifying spots has been as compelling as we’ve seen for a number of years.

Many of the players below have played vital roles in their teams’ successes over the last seven months and we have tried to balance form and their importance within their teams to create our most impressive XV of the season.

1. Mako Vunipola, Saracens
Turn the clock back to 2014 and there were significant concerns that Vunipola would never be able to get the scrummaging part of his game up to scratch with his ability in the loose. A significant injury later and Vunipola has come back in storming fashion, improving his ability considerably at the set-piece, whilst losing none of his dynamism with ball in hand. He may still sit behind Joe Marler in England’s pecking order, but he has risen above Alex Corbisiero and cemented his spot on England’s bench.

2. Jamie George, Saracens
An early injury to Schalk Brits this season had Saracens fans worried about their team’s prospects, but George stepped up admirably, not only filling in for Brits, but also establishing himself as one of the best players at his position in the league. The hooker has been accurate at the set-piece, a willing carrier and a pivotal part of Saracens’ high-intensity defensive strategy, all of which narrowly sees him edge out Bath’s Ross Batty.

3. Dan Cole, Leicester Tigers
Despite a couple of injury problems this season, Cole has still been the benchmark by which other Premiership tightheads are measured. He is of course assisted by one of the best looseheads in the world in Marcos Ayerza, but the ease with which he returned from injury and immediately started destroying his opposite numbers at scrum time was remarkable. His form for Leicester and England this season should be one of the biggest reasons for England fans to feel confident ahead of the Rugby World Cup.

4. George Kruis, Saracens
The lock’s superb club form won him his much-deserved international debut earlier this season, where he did an admirable job filling the sizeable boots of Courtney Lawes and Joe Launchbury. Alistair Hargreaves may have assumed the captaincy following Steve Borthwick’s retirement, but it’s Kruis who is rapidly developing into the emotional leader of the pack, if not the team. Kruis has shown himself this season to be one of the premiere set-piece second rows in the league.

5. Courtney Lawes, Northampton Saints
It’s been an injury-disrupted campaign for Lawes, but it’s a testament to his ability that he’s still one of the standout performers in the competition. He is the best lineout forward in the Premiership, not least so for his ability to steal opposition ball, whilst momentum-changing tackles have also been a regular feature of his play. Lawes plays some of his best rugby when he doesn’t have the ball in his hands and though that doesn’t necessarily make for attractive rugby; its value cannot be underestimated. Graham Kitchener has also been in excellent form for Leicester and more than merits an honourable mention.

6. Dave Ewers, Exeter Chiefs
As it did with Billy Vunipola before him, Ewers’ move to blindside flanker this season has been the making of him as a player. Already a devastating carrier, Ewers has developed into a workhorse tackler and an abrasive influence at the breakdown, permanently shedding any critiques that he is a one-dimensional player. Jack Clifford really came on late in the season, but this spot was one of the easiest to pick, such has been Ewers’ influence for Exeter.

7. James Haskell, Wasps
Haskell may not have set the world alight with England during the Six Nations, but let’s not forget the reason why he got that opportunity; his sensational Premiership form. A vocal and emotional leader, Haskell is all that remains from Wasps’ glory days in the mid-2000’s and his contribution to their impressive season thus far has been significant. Carrying, tackling and fetching, Haskell has done everything Wasps have asked of him this season.

8. Thomas Waldrom, Exeter Chiefs
The former Tiger has been in exceptional form since he upped sticks and headed south to Devon. He leads the league’s try scoring charts with 14 at time of writing and has provided great leadership to a young team that is still developing. Wasps’ Nathan Hughes and Northampton’s Samu Manoa have both been excellent this season and their omissions are a testament to just how good Waldrom has been this campaign. A further name worthy of mention is Sale’s Josh Beaumont.

9. Ben Youngs, Leicester Tigers
Youngs’ return to form may be one of the least talked about stories of the year, but could yet turn out to be one of the most important ones for England fans, especially with the RWC looming. Leicester’s dynamic nine may not be quite at the same level that saw him torment Will Genia in 2009, but he has certainly stood out in a Tigers team which has laboured all season long. Only Joe Simpson has been in comparable form at the position.

10. Stephen Myler, Northampton Saints
George Ford may have taken to the England 10 jersey with aplomb, but Myler has been efficient and consistent throughout the season and is as an important reason as any as to why Northampton currently sit top of the pile in the Premiership. Danny Cipriani and Henry Slade have also had very good seasons and were unlucky to miss out, but Myler rarely receives the praise his high-calibre performances are due.

11. Sinoti Sinoti, Newcastle Falcons
Sinoti could not have done much more this year to warrant selection for Samoa at the upcoming RWC. The bruising yet elusive winger has just one Samoan cap to his name, but has been cutting Premiership defences to shreds this season in an underrated and improving Newcastle back line. Alex Lewington and Matt Banahan were also standout left wings this season, but both were left trailing in Sinoti’s wake.

12. Sam Tuitupou, Sale Sharks
Cipriani is an extremely gifted fly-half, but so much of what he does well for Sale, is down to the work of Tuitupou. The inside centre has been in superb form this season, whether that’s breaking tackles when he takes the ball on the gain line, or running clever lines to leave defenders flailing in  the open field. For Cipriani, knowing that he has a reliable and effective carrier outside of him such as Tuitupou, gives him the security blanket to play ambitiously and look for opportunities, safe in the knowledge he has a safe option on the short ball.

13. Jonathan Joseph, Bath
The most consistent performer in Bath’s vaunted and dangerous back line, Joseph’s excellent club form translated perfectly to the international stage during the Six Nations. Joseph’s understanding with Ford, Kyle Eastmond, Anthony Watson and Semesa Rokoduguni has been evident all season, as the quintet have played some of the most exciting rugby that the Premiership bore witness to. The former London Irish man came into the season as good club player and promising prospect; he leaves it an international-calibre outside centre.

14. Christian Wade, Wasps
The dynamic winger has been as deadly as ever this season, pushing his case for England selection about as far as he humanly can. There are still a few holes to his defensive game, but it has looked much improved this season and is certainly no worse than other players who have been given shots on England’s wings. His ability to create try-scoring opportunities out of nothing is unmatched in the Premiership, even by superstar winger George North, and this has been illustrated by Wade storming the Premiership try-scoring charts. His 12 tries tie him with Tom Arscott and are second only to Waldrom (14), though neither player creates the same amount of opportunities for their teammates as Wade.

15. Anthony Watson, Bath
Despite being shoehorned into a position on the wing for England, Watson has been the standout full-back in the Premiership this season. His searing breaks and mesmerising footwork have been unmatched, although Alex Goode deserves an honourable mention for a good season. Mike Haley and Simon Hammersley are two under-the-radar names worthy of mention, with both youngsters firmly establishing themselves as Premiership-quality players this season.