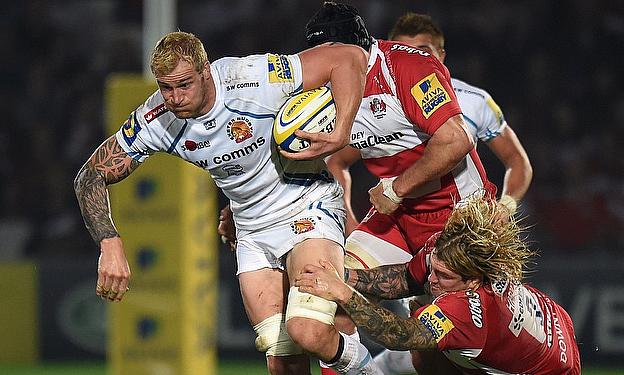 Exeter pull off an impressive win against Gloucester
©PA

Just when we think that it cannot get any more dramatic or emotional we have another Round of Aviva Premiership action that delivers an even larger talking point than the last. Once again it was quite the weekend of action however one side and one match stole all of the headlines.

On Friday Night Kingsholm experienced another emotional rollercoaster as the Exeter Chiefs came to town. In Round 2 Gloucester left it until the second half to finish off the Sale Sharks and with that fresh in their minds they started strongly against Rob Baxter’s side and developed a 12-6 lead thanks to Jonny May’s delightful feet. The Chiefs, well they took a little while to get going however once they did their deadly marksman Gareth Steenson added with 12 points of his own off the tee. It was an arm-wrestle of a match as the momentum swung between the two sides, for the visitors Henry Slade impressed with his deft hands and physicality whilst Gloucester’s Aleki Lutui made a real impact up front when he came on. What pleased Rob Baxter so much was that his Chiefs held their nerve and finished off the match, something they have historically been unable to do. As he pointed out following the game it wasn’t pretty but, for his side’s confidence and learning, the experience was worth its weight in gold. David Humprehys’ knows that his side are moving in the right direction; out the back they house great speed and Henry Purdy held his own on his debut however up front remains a little creaky. All in all cohesion is coming for Gloucester Rugby, and a losing bonus point will be some consolation, however Exeter will be the happier side following Round 3.  Final Score Gloucester Rugby 22 Exeter Chiefs 25

In South West London Harlequins had the task of bouncing back from a Round 2 demolition as they hosted Wasps at The Stoop. As was the case at Kingsholm it was an emotionally charged affair, that contained a fair few handbags, between two sides that know each other well. The last four fixtures between Harlequins and Wasps have all been decided by 2 points or less and Saturday’s was almost as tight. Wasps’ performance was patchy at best, certainly in comparison to their Round 2 performance against the Northampton Saints. Across the board they looked tired and didn’t execute with precision. Harlequins’ stand in fly half Ben Botica kept the scoreboard ticking for his side off the tee and Chris Robshaw put in a performance to turn heads as he constantly drove forwards and punched holes in Wasps’ defensive line. For the visitors Joe Simpson continues to excel as he showcased pace and vision however it just wasn’t their day despite prolonged pressure until the very end. An audible sigh of relief could be heard around The Stoop when JP Doyle blew the final whistle and Harlequins will head to Sandy Park feeling a little better about life than they did at the end of the last round. Final Score Harlequins 26 Wasps 23

At the AJ Bell Stadium Steve Diamond and his men achieved their first win of this Aviva Premiership campaign over London Welsh and they secured a bonus point in the process. They left it later than they would have liked as four tries in the last 14 minutes sealed the deal. Sale’s excitement was delivered in the form of the two Tom’s, Arscott and Brady, with Tom Arscott joining the exclusive hat-trick club and it was the man of the moment Danny Cipriani who ignited proceedings as ever. Again, London Welsh’s day wasn’t the greatest and their performance didn’t move on from Round 2, instead their defensive line was porous and at times it was all a little too chaotic. Justin Burnell is taking the Premiership in his stride however you can feel the annoyance starting to creep in, in his words; ‘it was the same old story - people dropping off. It's execution, it's skill and it's the individual errors - I think that was the biggest disappointment’. Steve Diamond wasn’t overly happy either with his side as he shared; ‘it wasn't a great performance by us, to be honest, we’re making elementary errors – it’s where we’ve been all year. In Round 4 Sale make the trip down South to Allianz Park whilst London Welsh have a short turn around as they host Gloucester at the Kassam on Friday Night. Final Score Sale Sharks 46 London Welsh 8

The Rec was also known this weekend as ‘the House of Dreams’ as its side delivered what Will Greenwood described as ‘one of the best English Club team performances of the decade’ against the Leicester Tigers. It was a day that will live long in the memories and hearts of all at Bath Rugby whilst it was a dark time for anyone associated with Tigers.  Bath were empathic in attack and  bruising in defence, it almost seems rude to single out individuals that shone for the home side as every single man delivered. However, Jonathan Joseph reminded us all of the credentials that put him in the current England training squad, Kyle Eastmond took a great deal of pressure off a mesmeric George Ford and Rokodunugi had a field day. The forwards as a collective also deserved huge praise as they squeezed the Tigers at scrum time and bossed them in the loose. Leicester were without a number of key men and with Manu Tuilagi and Anthony Allen both pulling out prior to kick off it was a depleted XV that started the game and a battered one that ended it. Of course Mike Ford was elated following the game and his side have certainly given themselves a great platform to jump off for to take on the Saints next weekend whilst Leicester will need to lick their wounds and salvage some pride at Welford Road against London Irish. Final Score Bath 45 Leicester Tigers 0

At the Madjeski Stadium London Irish welcomed Saracens to town for their first home game of the season. Many had billed Saracens to cruise to victory with ease and after a try in the first minute from Tim Streather and the side stretching to a 20-12 lead the writing seemed to be on the ball for Smith’s men. However London Irish fought back hard, ignited by 23 year old Alex Lewington who ran in a captivating hat-trick and was ably supported by the ever improving Shane Geraghty. With the momentum in London Irish’s hands Saracens left it late, very late, to close out the game; indeed Brad Barritt’s decision to kick for the corner instead of going for the points to secure a draw had Mark McCall on a knife edge! However Saracens’ forwards did the rest and an elated Billy Vunipola broke Irish hearts; it was yet another dramatic end to an Aviva Premiership fixture. Rightly so London Irish’s Director of Rugby thought his side had done enough to take the victory as he shared after the match - ‘We just need to digest today because it takes a bit of getting over. It was like a train smash at the end there.’ Irish should head to Welford Road with confidence in their abilities in search of a result whilst Saracens will have the bit between their teeth against Sale at home next Saturday afternoon. Final Score London Irish 32 Saracens 36

The final game of the weekend was up at Kingston Park where the Newcastle Falcons were seeking their first win in 18 Aviva Premiership matches. The Northampton Saints arrived with a point to prove after their Round 2 loss to Wasps and for forty minutes they did so, in empathic fashion. As the Falcons kicked slightly aimlessly Ben Foden enjoyed countless breaks forwards and for the first 30 minutes the Saints scored almost a point a minute racing to a 28-3 lead. Dean Richards’ half time team talk must have been stern and constructive for after the break the Falcons delivered. The Falcons showed much greater discipline and their off-loads started to stick which drove them forwards and they drew the second half 7-7 with their visitors. Saints didn’t fall asleep, they just found themselves in a contest and it took until 78 minutes for them to secure their bonus point courtesy of George North’s try. Jim Mallinder was pleased to see such composure from his young fly half Will Hooley and looked a relieved man to be heading back down south with 5 points in the bag. Dean Richards was left wondering what if, again, as his side could have imposed themselves much earlier on the match. 19 matches without a win for the Falcons, their quest goes on as they head to Adams Park in Round 3 whilst Northampton have the excitement of hosting Bath at Franklin’s Gardens. Final Score Newcastle Falcons 10 Northampton Saints 35