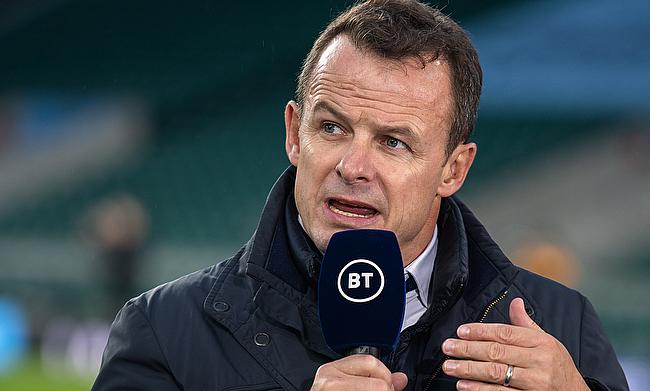 Austin Healey knows he may well be criticised for his opinions in this interview, but in his own words, he is used to it by now.

“Are you asking me to put my neck on the line?! It just means you get abused constantly online which I have experienced throughout my entire media career!”

Healey’s answer is in response to a question regarding predictions for the new Gallagher Premiership season. His choice of Exeter 1st, Sale Sharks 2nd, Wasps 3rd, and Bath 4th may cause a ripple of debate amongst supporters, but it is our discussion around his former club Leicester Tigers which could ruffle a few feathers.

It is perhaps unsurprising to see Healey wearing his heart on his sleeve when discussing the difficulties the Midlands side have endured over the last few years and whilst his scathing comments may seem harsh to some, the four-time Premiership winner is just desperate for his old team to experience some success again.

Last season, the Tigers finished in 11th place, just one position above the relegation zone, as Leicester lost seven of their nine games following the resumption of the Premiership campaign back in August.

These times have been uncertain for a lot of rugby clubs, but Leicester Tigers' problems have been played out in the public eye...

But can they now turn over a new leaf and focus on the future?

It was also a summer of turmoil for the Welford Road club with star trio Manu Tuilagi, Kyle Eastmond and Telusa Veainu all going their separate ways and the recent departures of Director of Rugby Geordan Murphy, coaches Boris Stankovich and Rob Taylor, as well as Rory Underwood, paints a worrying picture once again.

“Leicester’s a mess isn’t it?” Healey exclusively tells TRU. “It is like someone has taken a whale out of water, put it up in a crane and is waiting for bits of it to fall off until it eventually dies. They have got to get that club back in the water and I don’t know how they do it. It is going to take a long-term plan, but their long-term planning in the past has been a joke.”

The ocean analogies were also a feature of Wednesday’s press conference with Leicester head coach Steve Borthwick, who described the Tigers as “a big old ship that has been heading in the wrong direction for a period of time.”

The brief for the former England assistant coach is to try to steer the club back towards past glories, but Healey doesn’t think Borthwick is the right person to turn the tide at Welford Road.

“Do I think Borthwick is the right man for the job? No, probably not,” adds Healey. “I was surprised when they got him because he has not coached a club before. He has been an assistant coach for an international side behind Eddie Jones, who we all know is autonomous. He has never really been in control.

“Speak to Paul Gustard. Ask him how hard he is finding it in the role [at Harlequins]. He had never done it, but he has got an energy. Borthers has got an energy but it is always full speed ahead. You can’t do that. The season is like a wave and you have just got to keep climbing the wave. You can’t go straight up and stay there because everybody dies and falls back down. They can go in with a strategy, but without the right energy, a belief and an uncompromising backbone, you don’t succeed in this league.”

“I’m most proud of the respect I earned from my team-mates and colleagues..."

With 8?? #PremRugby titles and 2?? European titles as a player, before rising through the coaching ranks to the very top, Geordan Murphy leaves @LeicesterTigers ??

And a piece of the ‘backbone’ which Healey refers to is now no longer part of the Tigers’ vision.

After working alongside Geordan Murphy during the conclusion of the 2019/20 season, Borthwick will not have the Irishman to lean on this weekend when Leicester host their 2500th game at Welford Road.

Murphy’s 23-year affiliation with the club came to an end last Friday, but the entire nature of his exit does not sit well with Healey: “You don’t give 23 years of your life to a club for it to come to a conversation where it goes; ‘Sorry, we are not extending your contract.’ ‘Can I go now?’ ‘Yeah, you can.’ You don’t come to that conversation.

“You got back three years ago and the board should sit together and say ‘Do we think Geordan Murphy can be a Director of Rugby and look after recruitment, look after the financials etc?’ Get that consensus and if you don’t get that consensus, you have to think about who the next coach is going to be when he goes.

“You can offer someone a three-year contract, but in those three years, they better be a lot better than they are when they first start or the board will be throwing a party, thanking you, giving you a gold watch and encouraging you into another industry which they will have trained you up for before you get there. That is what an exit looks like. It doesn’t look like a conversation over a cup of tea after 23 years.

“There will be Leicester players that read this and Leicester board members that see it. Borthwick will read the fact that I don’t think he is good enough, and hopefully, that buoys them on a little bit. They will hate me for it. I will get vilified for what I say, but the fact is that I want Leicester to succeed and I want their mentality to be strong enough to take little knocks from Scouse guys that open their mouths.”

Clearly, Healey expects Leicester to struggle again this term having only avoided relegation last season because of Saracens’ misdemeanours but as the former Tiger has alluded to, he hopes to be proven wrong.

The Midlands club begin the new campaign against Gloucester on Saturday afternoon, a team which Healey feels could break into the top four, but all eyes will be on Exeter Chiefs after they clinched the Premiership and Champions Cup titles in 2019-20.

On Friday night, the BT Sport cameras will be at The Stoop to see the double-winners take on Harlequins in their season opener and whilst there will be a fervour surrounding the Chiefs, Healey believes the winning culture which they are beginning to develop is becoming natural for Rob Baxter’s side.

“I think the concern for everyone else is that year on year, Exeter have got better and better and there is nothing to suggest they aren’t going to get better again,” Healey adds. “That has been one of Rob Baxter’s greatest skills and everyone involved with the club. Every year, they have got another component to their game and another layer.

“How do you break their confidence? How do you break their belief? Last season’s success holds them in such good stead moving forward because they can chuck it in their backpack and say that they have done this now so we can do it again. It is like ‘Sport Billy’. He would pull out a pair of skis or a tennis racquet and off he’d go and I think that is where they are. Exeter have turned into Sport Billy and you have got to be over 40-years-old to appreciate that analogy.”

Whether you can relate to Healey’s niche reference or not, Exeter will almost certainly be challenging for honours this season. The attention will be on the Chiefs to see if they can replicate their success, but the uphill task facing Leicester won’t be too far away from the spotlight.

BT Sport is broadcasting all Gallagher Premiership Rugby matches played behind closed doors in the 2020/21 season. The season kicks off on Friday 20th November with Harlequins v Exeter Chiefs at 7.45pm on BT Sport 1 and BT Sport Ultimate.