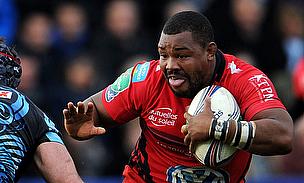 Toulon knock Leinster out in thriller
Bring on the Best, Says Care

Forwards coach Graham Rowntree has said that despite a series of strong performances for Toulon, Steffon Armitage is not being considered for England's summer tour of New Zealand.

Rowntree has confirmed that England will continue their policy of only picking players at foreign clubs in exceptional circumstances.

Calls for Armitage to earn a recall have been growing and he turned in a man-of-the-match display as Toulon beat Leinster 29-14 to reach the semi-finals of the Heineken Cup.

However, England's selecton policy prevents him from challenging Chris Robshaw for the number seven shirt.

"Our stance is quite clear - we want to promote those guys playing in England for obvious reasons," Rowntree said.

"While they are playing well, we're quite content with that. It's Steffon's decision completely and I'm comfortable with our stance.

"We've got a wider group that is good enough to win the World Cup. And we're showing that we're going the right way towards doing that."

And Rowntree already has a good idea which forwards will be heading to New Zealand for the opening Test on 7th June.

Players involved in the Premiership final on 31st May will not travel but Rowntree is not discouraged.

"What will be will be. They're not great cards that we've been dealt, but we'll get on with it," Rowntree said.

"One thing we've shown over the last couple of years is that we'll throw guys in there if we feel they're good enough, regardless of age.

"The situation with the first Test is a major, major plus for us. We can have a look at a good group of players.

"Over the last four months the group has expanded because people have come in and taken their chance.

"We had a perceived under-strength team that was nearly good enough to win the Six Nations.

"We're confident now more than ever in the group of players that we have."

Rowntree played in one of only two England teams to have beaten New Zealand on home soil.

He started the 15-13 victory in Wellington in 2003, when England played for part of the match with 13 men, bravely resisting a series of New Zealand scrums on their own line.

"That was an historic night. I'll never forget Martin Johnson's comment after the game," Rowntree said.

"When he was asked what was going through your mind in the last scrum when we were down to six men, he said: 'my spine'.

"It was a famous victory. We dug in that night. We were a bit fortuitous that they missed a few chances. Hopefully we'll be able to emulate that again.

"We'll have to be on top of our game. We've shown significant strides in how we're playing, none more so than in terms of our attacking shape and all-court running game.

"Along with every other facet of the game, that will have to be at 100 per cent when we go over there.

"You have to go over there with confidence and we'll do that more than ever with the group of players we have. We have a young, confident squad with nothing to lose."

Rowntree was talking at an event for QBE, the business insurance specoalist, who are committed to supporting the development of rugby through the QBE Coaching Club. Visit www.QBErugby.com