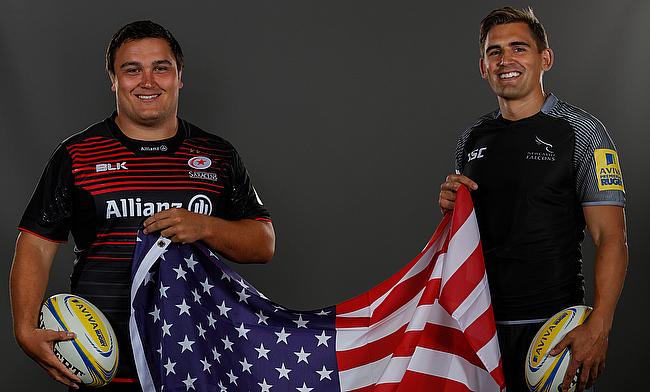 Newcastle Falcons back-row Ally Hogg says he is excited about facing the European Champions Saracens in the upcoming Aviva Premiership clash in Philadelphia on Saturday.

The Kingston Park outfit will head into Talen Energy Stadium with four consecutive Aviva Premiership wins and two this season that came against Sale Sharks and Worcester Warriors.

Hogg, who played for Scotland between 2004 and 2009 is pleased with the start from the Falcons this season but is also wary of the challenge Mark McCall's men possess.

"We’re pleased with the way things have gone with beating Worcester and Sale this season, and it’s great to see the boys’ hard work rewarded, but we know it’s still very early days.

"Playing the European champions we know will be a step up, and our next two games against Saracens and Bath will be a better barometer of where we really are.

"Sarries haven’t changed their style much, and why would you when it has been so successful?

"They’ll be very set-piece oriented, kicking it, chasing it and trying to apply pressure. It’s about us dealing with that pressure, not getting caught in their trap of playing too much inside our own half and then looking to impose our own pressure back on to them."

Hogg, who switched from Edinburgh to Newcastle Falcons in 2010 also is looking forward to playing in the vibrant atmosphere in Philadelphia and is hopeful of a competitive game on Saturday.

"It’s good and it’s exciting, getting to visit different places. It’s what rugby’s all about, new experiences, and the boys are enjoying it.

"I’ve played over here before and almost got my first Scotland cap in America. We played in Portland and San Francisco and I sat on the bench as an 18-year-old, but it’s great to be back here. Hopefully it’s a good game and the supporters over here have a positive experience seeing the Aviva Premiership first hand.

"There’s a decent rugby community over here but the bulk of the population are more accustomed to American sports, and I guess rugby to some extent taps into parts of American football in terms of the contact element.

"I’m sure they’ll like the physical nature of it, and hopefully we can win them over with the skill, speed and strategy that rugby has to offer.”