Alex Waller Exclusive: “I come to work for a rest!” 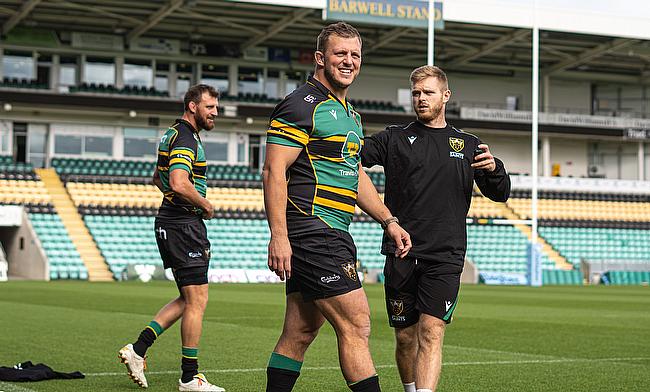 “It does feel like I am being pulled in a million directions,” Northampton Saints’ Alex Waller jokes as we chat over the phone.

The record-breaking forward is into his 14th season at cinch Stadium at Franklin’s Gardens, but life seems to be busier now more than ever for Waller.

After discussing his recent milestone - of playing in more Premiership matches than any other prop - plus his testimonial year, the conversation moves to life outside of rugby including his woodwork business as well as his father duties.

“I have got two kids who are now under three so it is pretty busy at the moment!” laughs Waller. "I come to work for a rest! “The woodwork stuff is a hobby that sort of spiralled into a business between myself and Tom Wood. It is just something completely different from rugby and takes your mind away from it.

“Loads of lads do many different things. Boys play PlayStation, Xbox, other lads do coffees whereas I play with power tools in the workshop and make Dave Ribbans a very nice oak table!”

Another milestone to add to a considerable collection.@alex_waller becomes @premrugby's most capped prop ever ?????? pic.twitter.com/QZsN1CZpwv

Would Waller swap the seemingly ‘on-the-go’ lifestyle, though? Absolutely not.

Right now, the 32-year-old is enjoying his time both off the field - and more recently on it - as the Saints work their way up the Gallagher Premiership table.

Successive victories over Wasps and London Irish - where Chris Boyd’s charges looked back to their free-flowing best - has left them seventh in the standings and just four points off the top four.

“They really stood up and put their hands up for selection. It is good to give the coaches some selection headaches. All that does is raise standards.

“There is a great buzz at the club at the moment. We are feeling really good moving into this next block of Premiership games, but you have just got to take it one week at a time as cliché as it sounds.

“We are very aware and not naïve to the fact that we need to win these games coming up to keep our hopes of top four alive, but as I said, if you look at the bigger picture too much, it can become a little bit overwhelming.”

Waller refers to the “buzz” around Northampton as the Premiership finish line begins to creep into view, and that additional energy which has been injected into the squad by some of their youngsters is only enhancing the feel-good factor.

Under the gaze of Boyd, the club’s Director of Rugby has helped launch the careers of players including George Furbank, Fraser Dingwall and Tommy Freeman whilst he has also handed out recent starts to emerging talents such as George Hendy, Josh Gillespie and Geordie Irvine.

Some of the next generation will be on show on Wednesday evening when Northampton host Newcastle in the Premiership Rugby Cup and these sorts of opportunities are what excites Waller.

“We are a team which prides itself on developing homegrown talent,” adds Waller, who made his Northampton debut 13 years ago.

“Like any Premiership club, there is going to be external people coming in, but if you look at the amount of homegrown talent that comes through the academy and into the senior squad now, it is pretty impressive. Some of these lads, I have been lucky enough to see come all the way through the academy and into the first team. Long may it continue.”

Having a hand in the development of players coming through are of course the coaching staff at Saints, including academy manager Mark Hopley, but also Head of Analysis Ross Appleton.

Whilst Appleton’s main focus will be on improving the first team, his relationship with Veo - one of the global leaders in AI-powered sports recording and analysis - has enabled the academy players at the club to take their game to the next level.

Northampton currently have two Veo cameras - which are predominately used by the academy side who recently reached the U18s league final - and Appleton first came across the company two years ago.

“At the time, one of the things we were looking at at the club was how efficient we were at filming alternative angles,” Appleton tells TRU.

“Essentially, we were looking at Veo as a way of helping to support our academy programme where generally speaking, we have got one full-time academy analyst, but he was going to games and only having one pair of hands and one pair of eyes so that is why we looked at Veo to provide a solution.”

The ease of set-up and how cost-effective Veo is are some of the qualities which Appleton highlights as well as the benefits of the technology.

“As the technology improves, we have got players coming through the academy system that are a lot more intuitive about using video systems such as Veo,” Appleton says. “To increase learning, we do want our academy players to be able to have that functionality.

“What we are really excited about is in the industry, there are buzzwords and ‘AI’ is becoming massively important in how we move the game on.

“At the academy level, lads have embraced Veo and showed interest because obviously that is the way they are getting the footage. The lads are getting access to those training sessions and games and suddenly they have got four angles to watch from. They are then interested in where those four angles have come about. The younger generation are a lot more interested in the technology we use now so that will only start to grow with Veo as lads start to graduate through our academy and get into the first team.”

Appleton also added Veo isn’t purely for analysis purposes, either. He admits that modern-day technology can ‘create memories’, where footage can be saved and then shared so players can look back on some of their highlights during and after their careers.

Just two brothers having a beer after the game.@alex_waller ?? @beef324 pic.twitter.com/MXaquLqyri

For Saints stalwart Waller, he has no plans to hang up the boots just yet especially now his brother, Ethan, is returning to the club in the summer.

The 29-year-old is set to call time on his five seasons at Worcester Warriors and will pull on the Black, Green and Gold once again in the 2022/23 campaign.

“Obviously I knew a bit before it was announced, but it is really good to see him come back to Northampton for on the pitch reasons, but even more so off the pitch as well," Waller adds. ”I am looking forward to him coming back on a personal note to get the family back together. He has got a little daughter who is a similar age to mine so they can spend time together.

“I think he is more excited about the free babysitting! That takes a little bit of my free time away because we will have to look after the kids all at once so we will have to have a chat about that one!”

Before Ethan comes home and before Waller’s list of priorities grows slightly longer, the Northampton legend will be making sure performances on the pitch are towards the top of his agenda as there is still plenty to play for between now and the end of the season for a Saints side who look to be hitting their straps at just the right time.