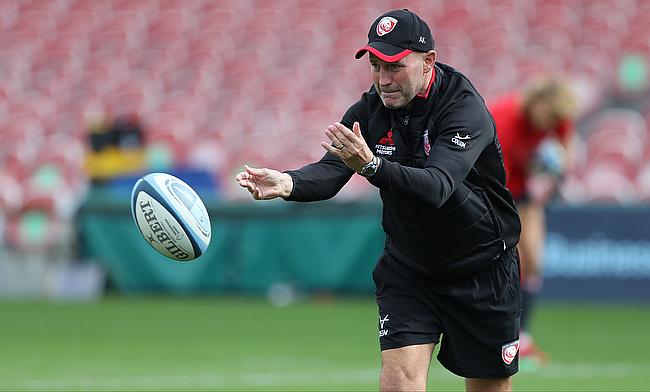 Laying down the law: Bristol's Dave Attwood to feature at ‘On the Ball’ conference
Exclusive: Stephen Varney - We are dying to get a victory
'We can say this is us now' - London Irish return 'home' as new era begins
Video Highlights: Gallagher Premiership - Round 1

It is difficult to think of the words to describe last weekend’s rugby.

Usually, you’d expect there to not be enough superlatives, for there not being an appropriate way to describe the sheer brilliance of those involved. In this case, it is the opposite.

It all started on Friday night as Newcastle played host to Sale Sharks, the game descending into a kicking fest, with very little rugby actually being played. Over the weekend, at both domestic and international levels, not much would change.

Potentially it is the time of year where teams will go to the boot more anyway, but for many, it has prompted them to switch the rugby off and find something else to occupy their time.

However, thankfully, there were a couple of games that caught the eye on Saturday as two teams that wanted to run the ball and test their opponents did exactly that.

Harlequins were one of those sides as Paul Gustard’s men put 49 points past Northampton Saints at Franklin's Gardens. Marcus Smith scored 27 of the points whilst flanker Will Evans gathered four turnovers.

Gloucester were in the points, too, as they defeated Premiership finalists Wasps 40-24 at Kingsholm. Neither side were spotless, though, conceding a raft of points between them, but they still offered the best spectacle over the course of a weekend that offered fairly little.

The above factors suggest that we could be in for a treat on Sunday when the Cherry and Whites host Quins but after a weekend of pretty dull viewing, Tuesday's press conference with Gloucester attack coach Alex King quickly switched to the kicking-infested games that made people reach for the television remote.

A sight to behold ??

?? @lloyd_evanss praised the work of the forward pack as the Cherry & Whites ran in 5 tries on Saturday.

“Ultimately, professional sport is about winning,” King said. “But, at the same time, we have got a duty to the industry to promote a game that people want to pay a buck to come through the turnstiles so there has to be a balance I suppose.

“Ideally, we would all love to play free-flowing rugby, end to end, but the way the game is at the moment, territory is king because of the ability of defensive players to jackal and cause trouble at the breakdown, so there is a real balance isn’t there?

“There is some very good kickers in this league. We played against Leicester and (Richard) Wigglesworth, he is one of the best in the world and we are playing against another one in Danny Care this weekend and they (Harlequins) will have Will Evans at the ball, hovering so we need to be smart.

“But we also need to put pressure on those kickers to be able to maybe give us a counter-attack opportunity, so the onus is on us to really provide those situations and those opportunities, but there is a trend at the moment for a lot of kicks, a lot of kick chase and sometimes it is easier to play without the ball.

“I suppose it is up to a lot of people cleverer than I to think up rules and ways of promoting an attacking brand, because that is ultimately what is going to put bums on seats.”

With a team like Gloucester, you quickly think about their backs. Attack coach King was one of the Premiership's most reliable fly-half’s in his playing days, guiding Wasps to numerous trophies and earning himself several England caps.

Having spent the last seven years of his career at Bath, Matt Garvey is now on the search for a new club.

He spoke to TRU about leaving the side he captained for two seasons and the state of rugby as a whole as players prepare once more.https://t.co/x2S0CE3E9C pic.twitter.com/1r219L5HN3

The club’s options in the backs are almost embarrassingly good. Danny Cipriani, Joe Simpson, Mark Atkinson, Chris Harris, Ollie Thorley, Louis Rees-Zammit and Jonny May are all headline makers in their own right and easily some of the best attackers in the Premiership.

But, in order to let these players fly, their forward pack has to put in the hard yards to create enough space for the backline to unleash themselves.

"Then the aim for a team like us, with the backline we have got, is to unleash that speed and that power. We as tight forwards have to allow that space to open up and narrow their defence.

“There is a balance to it. I still think in this game, you have the ability to run wide and show some real beautiful plays and show the style of play you have seen teams across the league play in previous years. I just think sometimes it comes down a bit to the execution.

“You might only get one shot every three plays. If you don’t execute that, you find yourself going back to scrum, which is then reset or a maul and then a penalty and another maul, if that makes sense. I think there is a balance to it, but the teams that are always successful will be the ones that capitalise on those moments.”

Since his move to Gloucester, Garvey has quickly become a regular in Cherry and White, combining effectively with Ed Slater in the second row and adding more bite to their pack.

After their opening day loss to Leicester and last week's win over Wasps, Garvey and his team-mates will be looking to restore Gloucester back towards the top of the Premiership table, starting on Sunday afternoon against Quins.