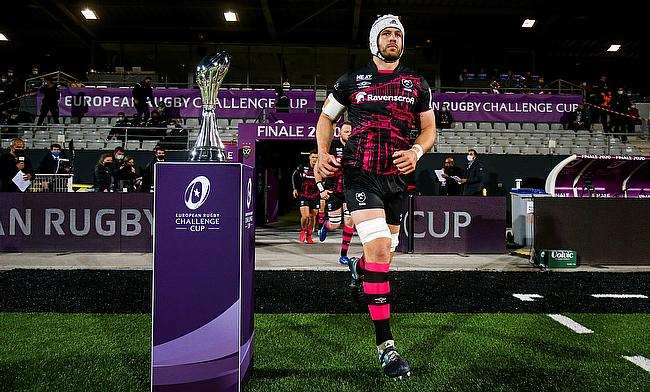 When Bristol Bears lifted the European Challenge Cup at the end of last season, it was an extra special moment for Dave Attwood.

For a born and raised Bristolian, securing the club’s first major trophy for 37 years has provided the experienced lock with a memory he will never forget. The Bears’ triumph over Toulon came just six days after their Gallagher Premiership semi-final defeat against Wasps, but Pat Lam’s side concluded an historic campaign by clinching silverware in Provence.

Attwood began his career in the Bristol academy before representing Gloucester and Bath, respectively, but he returned ‘home’ in 2019 to a club which continues to raise the bar.

The Bears have harnessed a real sense of togetherness within the walls of Ashton Gate - as well as the club’s state-of-the-art training facility - and it is a formula which has allowed the West Country outfit to seriously challenge for honours.

And whilst the drive to always improve is instilled in both Bristol and Attwood, that admirable ambition has filtered into the 33-year-old’s work away from the field as life after rugby becomes more prominent in the mind of a rugby player.

Bristol Bears' Dave Attwood tells @AlexMLowe that he wants to swap his scrum cap for a barrister’s wig when he retires from rugby — but first, the small matter of a European final https://t.co/oi58VWcmkE

In an excellent recent interview with Times journalist Alex Lowe, Attwood revealed he wants to step into the world of law once he hangs up his boots. Alongside his duties for Bristol, becoming a barrister is a career path which the former England international is focusing on as he settles into his second year of a graduate diploma in law.

Attwood has already represented his Bristol team-mates in disciplinary hearings – including Siale Piuatu’s appeal towards the end of last season – but the Bears second-row will be able to soak up some more knowledge and increase his expertise when he takes part in the ‘On the Ball’ Rugby Union conference this week.

Attwood is part of a strong list of industry-leading speakers and experts who will be discussing the biggest issues in the game, including disciplinary procedures.

“I think this is a good opportunity for me to speak with other professionals around sports law,” Attwood told TRU.

“As a sportsperson, it is an area of interest for me and I am also venturing into the world of law, but this week is also an opportunity to put across current players’ views on a lot of things. Sometimes you talk about judiciary panels and stuff like that and it is very much academics talking about it and hopefully, I will be able to give a bit of perspective from the coal face.”

On Thursday, Attwood, who is also Bristol’s representative on the board of the Rugby Players Association, will be discussing the disciplinary process in rugby, the high tackle framework and discrimination in the game with former Leicester Tiger Leon Lloyd and ex-Premiership star James Bailey.

Alongside the trio will be Christopher Quinlan QC and Attwood feels the balance between the panellists will help his fellow professionals increase their understanding of the topics.

He added: “I have represented some Bristol players on disciplinary hearings and hopefully we don’t have very many more, but that was a great experience and some great exposure for me on a personal level!

“From the players' point of view as well, if a lawyer sits down next to you and starts speaking legal mumbo-jumbo, it might actually help the player if you have someone you know or you have worked with in the boiler room, next to you who understands that situation.

“I think one of the scary things as a player going into any sort of judiciary panel is that you don’t understand the language being used and you don’t understand what is going on because the terms of use are so removed to what we expect. Hopefully, what is discussed over the next couple of days will provide some comfort and solace for fellow players in those positions.”

Session 4 - The Future of Rugby

Across various different webinars, the topics which Attwood and others will be focusing on will include the international movements of rugby players, a discussion around the new salary cap regulations with Premiership Rugby’s Salary Cap Director Andrew Rogers, as well as a wider section highlighting the ‘future of rugby.'

As with all of the sessions during the ‘On the Ball' conference, the diverse issues which have been selected are very topical: “The discussion points are around some of the most prominent parts of the game,” said organiser Ben Cisneros. “We are combining that with industry-leading experts which we hope will be of interest to everyone whether that be players, agents, governing bodies, journalists etc.

“We want to make it an accessible conference particularly for players because so often they are excluded from the conversation. They rely on others to provide them with information about the business side of the game and often they can be misinformed. We want to do our best to educate them and keep them engaged by focusing on some of the issues which are affecting their careers in the present and into the future.”

The event is free to attend over Zoom and anyone can register their interest before Wednesday afternoon by emailing events@morgansl.com. The idea of making it ‘accessible’ will also allow rugby supporters to interact with various Q&A sessions in order to increase their knowledge of the game.

“It is important for people to realise why these decisions and rules are put down at the level they are put down at,” Attwood added. “Hopefully the conference will allow them to have a bit of empathy with the decision-making process which goes into that.

“Things like what will be focused on are often seen as ‘happening behind closed doors’ and it is easy for people who have a little bit of information to get upset and throw their toys out of the pram if something isn’t tough enough or not lenient enough when they don’t understand what has actually gone on in the first place.

“What is key is it also gives people a chance to understand the process because I think sometimes, the wider public struggle to get to grips with the decisions that go on in terms of the law changes and the judiciary panels and hopefully events like this week can bring more visibility to that.”