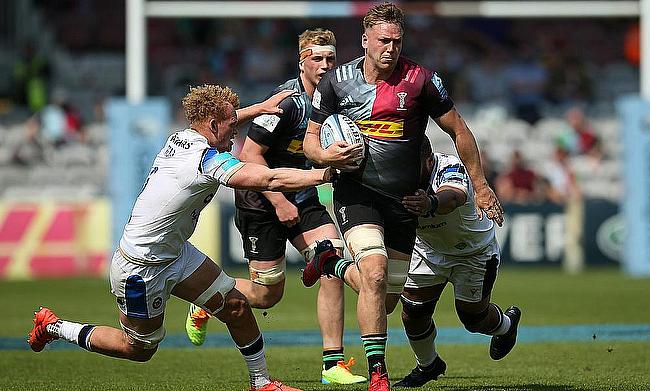 Alex Dombrandt's career is continuing on an upward trajectory
©Getty images for Harlequins. By Steve Bardens

Twickenham is becoming a very special place for Alex Dombrandt.

In 2018, he led Cardiff Met University out at England HQ for the BUCS Super Rugby final but his list of achievements on the hallowed turf is increasing at a rate of knots.

Last month, the No.8 helped Harlequins secure the Premiership title in dramatic fashion and this weekend, Dombrandt returns to Twickenham to make his full international debut.

England head coach Eddie Jones has welcomed the 24-year-old back into the fold after he was part of their World Cup training camp two years ago, but his influence for Quins and his standout contributions made Dombrandt hard to ignore for much longer.

"His big challenge has been to learn the game and to do it at the highest level is hard," Jones said. "When you have come out of doing basic arithmetic and you get into a pure maths class, it's difficult and he's learnt on the run and he's done that really well.

"We like the development of him as a player. The way he’s matured at Quins, he’s found a way to develop an effective game for his set of skills and at the same time do the basics of the game which are so important for any player.

"We haven’t seen the best of Alex yet. We might not for another couple of years but if he keeps that desire to keep improving, take the hard knocks and learn from it, there is no limit on where he can go as a player because he’s got some special skills.

Dombrandt - along with Harry Wells, Adam Radwan and Dan Kelly - are the debutants in the England side to face Canada on Saturday, with the latter also another product of the university pathway.

Kelly, who had an eye-catching season for Leicester Tigers, is a graduate of Loughborough whilst scrum-half Harry Randall is another England player who has experienced student rugby in the not-too-distant past.

The Bristol Bears livewire actually came up against Dombrandt three years ago and stole the show at Twickenham for Hartpury University. After making his own England bow in last weekend's win over the USA, Randall is relishing another opportunity alongside half-back partner Marcus Smith.

"Obviously I am delighted to be going again with Marcus," Randall said. "I thoroughly enjoyed playing with him and the team last week. Hopefully as a 9-10 combination [against Canada], we can go out there and execute the game plan to the best of our ability.

"It was a very surreal day [last Sunday] making my debut. It is something I have dreamt of for a long time and it made it even more special to take the field with so many other new caps as well.

"It is very exciting for us as young guys coming into this environment and having this opportunity to play. Hopefully we can become better players and push on to put ourselves forward to the future really. It is very exciting."

England's clash with Canada is part of a thrilling weekend of sport, concluding with the EURO 2020 final at Wembley on Sunday evening.

Gareth Southgate has led the Three Lions to the brink of history and Jones, who is a great admirer of the national football manager, has been impressed with the 50-year-old's approach to the tournament.

"Gareth's a humble, curious, very well-educated coach," Jones said. "The thing that impresses me for a young coach, he carries himself with a lot more experience. He'll know what to do. He doesn't need any advice from me.

"It's obviously given the country a lot to cheer about, so we wish them all the best for the final, and hope they go one better than we did [in the 2019 World Cup final].

"The English have the right to go nuts, but it does seem as though in England, sport does tend to galvanise quite a diverse community into supporting one thing, and that's probably the standout bit of what I see."