Will Greenwood Exclusive: Missing stars mean France will have "one arm tied behind their back" 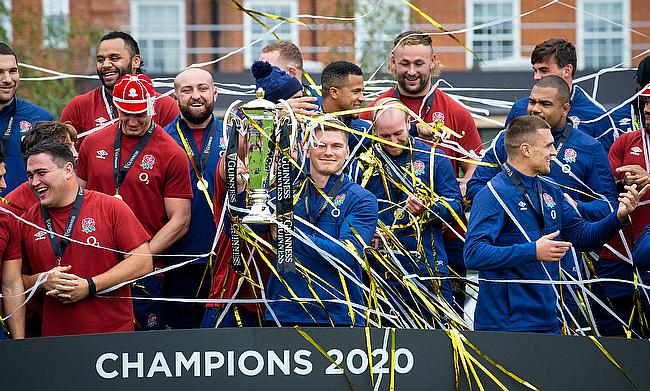 England and France have been far and away the best sides to turn out during the Autumn Nations Cup.

It is appropriate, too, that in Sunday's final at Twickenham, Eddie Jones' men will be playing the only team to have beaten them this calendar year - having lost to the French at the beginning of their Six Nations campaign.

France head into this game on the back of a 36-5 win against Italy as Fabien Galthié's second-string side eventually got the job done in Paris last Saturday.

However, despite the excitement surrounding Les Bleus, Galthié will be without some of his leading stars for this weekend's clash.

French clubs have limited players to only three international games over the extended autumn window so as a result, those lucky enough to attend Twickenham on Sunday afternoon will not get to see the likes of Antoine Dupont, Virimi Vakatawa and Grégory Alldritt in action.

“They might as well play with one arm tied behind their back,” former England centre Will Greenwood told TRU. “They were just finding that level of consistency and performance. The flip-side of that is, that on their day, they can still beat anyone. I think Galthié and (Raphaël) Ibañez have probably done the right thing three years out (from the World Cup) and waited to pick their battles.

“It does mean that their first XV have played three and won three, including a tough-ish trip to Scotland and players have not been over-utilised by playing four, five, six games so there are some silver linings.

“I think that will be the frustration for the fan, of which there are going to be 2000 on Sunday. They’ll turn up and be great, France, but if you could make a team third favourites in a two-horse race, I think that would be them.”

England have reached the final of the Autumn Nations Cup thanks to an uncompromising brand of rugby, generally taking the points when available to them and suffocating opponents into submission.

As a result, Eddie Jones' side have only gathered one try-scoring bonus point during this new tournament, which came against Georgia in their opening fixture.

Following on from their 40-0 triumph, individual brilliance from Jonny May helped them to a victory over Ireland and in Wales last weekend, they simply did enough to make it three wins from three.

In numerous press conference’s, Jones has outlined how he will not be showing the full potential of his attack until the 2023 World Cup and Greenwood can understand that logic as England look to remould themselves.

“They’re sticking to a very efficient system that is working well for them,” Greenwood said. “He is keeping his attack under wraps and adopting a really strong arm approach with a heavily territorial-based philosophy. It means, occasionally, they have sacrificed flair and instinct for organisation and structure which can limit your ability to rack up the points quickly.

“One of my views is that attack is something that needs to be built up over time, under the duress of live fire, which means proper international Test rugby. Stress testing is what you do and it allows you to tweak and manipulate what you have got to try and find a better way to evolve it.

“There is an argument that he (Eddie Jones), probably might think that his first team versus his second team is more of a test than what he is getting at the moment. I don’t necessarily think that is the case, but it might be something along those lines.”

Jones has also given debuts to several players this calendar year as he begins to find out which members of his squad could prove influential at the next World Cup. For this weekend, Wasps’ Alfie Barbeary and Jacob Umaga have been recalled to the Lensbury and France's selection headaches could allow more scope for some stars of the future to earn their first caps.

Since February, a cluster of players such as Tom Dunn, Jack Willis, Jonny Hill and Ollie Lawrence have all made their international debuts.

??? "We’re so excited about the game. We’ve worked hard for nine weeks to get to this position." ??

Eddie on what he expects from this Sunday's match against France ??#QuilterInternationals #AutumnNationsCup

Following the Achilles injury to Manu Tuilagi, many have been keeping an eye on how the aforementioned  Lawrence has fared as one of England’s key men in the midfield. Having plied his trade in shirts numbered 12 and 13, Greenwood says there is still more to come from the Worcester man as well as the other new caps.

“He (Ollie Lawrence) had a couple of unfortunate touches against Italy early on when you just snatch at everything which there is a tendency to do,” Greenwood said. “There is clearly a step-up to international rugby, however, the reality is that you have to settle into international rugby, where the quality across the board seems to be better.

“They (opposition) are not superhuman people. They tend to be people you play against week in, week out and you often build people up and situations up in your mind and the danger and the threat becomes far greater than the reality and so with that, you tend to force it a little bit.

“Certainly against Ireland, he went looking and punched holes and grafted hard and he was up against (Chris) Farrell who is a tidy operator. He has got more game time to come, no question about that.

“In the forwards, Jonny Hill is going great, bar his yellow card, Jack Willis, when he gets an opportunity, he makes an impact and makes a dent. There has been lots of positives. It is a pretty easy squad to be coming into at the moment, because you are winning, playing mainly at home. It is impossible to turn up at training without a smile on your face with that lot.”