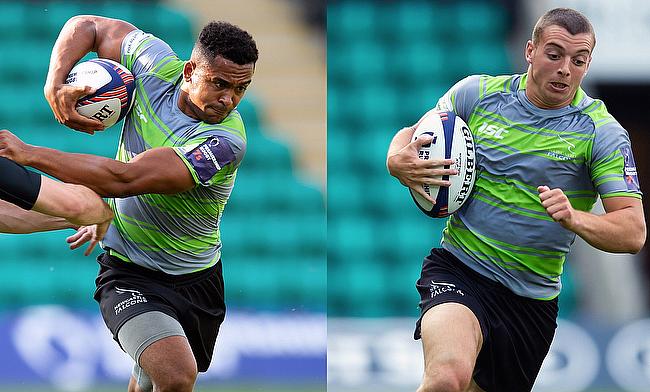 TRU takes a look at two of Newcastle’s brightest young stars who can help the Falcons build on their success of 2017/18.

Last season, Newcastle Falcons had a year to remember.

The North East outfit ended the campaign in fourth place which was their highest finish for 20 years and it has created a platform for Dean Richards’s side to build from.

There is a sense of optimism around Kingston Park going into the new campaign. Their position in the top four also secured qualification for the European Champions Cup so along with the buoyancy at Newcastle, there is also the feeling of excitement.

They begin the new term by hosting reigning champions Saracens on Sunday and it will be interesting to see whether Newcastle can match or even better what they achieved last year.

The romantics among us would love to see Newcastle challenge for honours this season, especially with the Champions Cup final being hosted at Newcastle United’s St James’ Park, but the Falcons will be fully aware they are no longer an unknown entity.

However, the element of surprise is still there at Newcastle. Of course, their expansive style and potent attack grabbed the headlines last season and quite rightly, Vereneki Goneva and Sinoti Sinoti claimed many plaudits thanks to their outstanding individual displays.

One of the standout moments from last season, when Vereniki Goneva became Alan Shearer ??‍??

Can the Newcastle Falcons build on their impressive form last season? pic.twitter.com/c8f2Zbqohz

But this pre-season, the understudies to Goneva and Sinoti have been creating quite a bit of noise.

In Zach Kibirige and Adam Radwan, the Falcons have two extremely talented and young options on the wing going into the new campaign and Richards cannot ignore the impact they have had in pre-season on both the XV-a-side and Sevens stages.

Kibirige (23) is three years older than Radwan and has experienced a lot in his short career. Since making his Premiership debut in 2014 against Gloucester, the former England U20s man has been held back by a series of injuries and has also had a stint playing in New Zealand, but he believes this season could be his time to shine at Kingston Park.

He said: “It has been really positive and a really good pre-season. I am pleased that I am hopefully going to get some more opportunities so I have got to keep working at what I am doing.

“The competition is pretty intense, but that is exactly how we want it to be so it is up to me to take my chance when it comes.

“Having a squad where everyone knows they can get some game time is always good. It keeps people pushing all the time which is what we want.

“Having people like Niki and Sinoti Sinoti to look up to and obviously Alex Tait who is pretty much a veteran of the Premiership, is really good. I am learning from them every day in training and you can develop your game that way.”

FALCONS TV: Head across to our YouTube channel and enjoy all the Falcons' tries from last Friday's friendly against Leinster, including this little effort from Zach Kibirige.https://t.co/4hz7NCLpC4 pic.twitter.com/010tU6HKyj

Kibirige has made the most of his opportunities in pre-season, with a try against the current European Champions Leinster standing out as the main highlight.

The Falcons also produced a dominant performance to clinch a 42-17 win over in Dublin and in total, Newcastle won all four of their pre-season matches.

Unfortunately, Kibirige will have to wait to make his return to the Premiership after missing out on the matchday squad for Newcastle's opening fixture with Saracens, but the same does not apply to Radwan.

The 20-year-old will make his first Premiership start against the champions after a scintillating pre-season in which he scored on all three of his appearances.

Last season, Rawdan won the Anglo-Welsh Cup Breakthrough Award as well as being the top try scorer in the European Challenge Cup, but stepping out at Kingston Park on Sunday will surely be his most enjoyable achievement to date.

His rapid rise is even more remarkable considering he was released by Newcastle in 2016. Radwan went away to ply his trade in National One for Darlington Mowden Park but a year later, he was back on the Falcons’ books.

“When I got released, they [Newcastle] told me what I needed to do and where I should be playing my rugby and that was at Darlo”, Radwan told TRU.

“They have a really good set-up there. They have some really good coaches and players so it was quite easy for me to slot into the team. I knew what I had to do so I just got my head down and worked really hard.

“You have got to go away and you have got to work on things, plus play a bit of men’s rugby before you get thrown in, so I learnt a lot in National One and it was extremely valuable.”

Radwan returned with a point to prove last year and as Newcastle exploded into life, so did the winger.

He added: “I knew what it was like on the other side so I was very keen to work really hard and take my opportunities.

“Now, I want to keep on playing and hopefully some opportunities can come around and I can take them. Last year was the bench mark for me as a minimum so I just want to kick on from there and hit the ground running.”

Radwan will now have his chance to do just that this Sunday as Newcastle look to build on their achievements of last year.

For both Radwan and Kibirige, there will be more opportunities past this weekend especially if Goneva and Sinoti received international call-ups for their respective nations.

The latter pairing were outstanding last season, but they are now in their 30s and Radwan and Kibirige are more than viable options for Richards this term.

As a club, Newcastle’s future does seem bright and with the likes of Kibirige and Radwan waiting in the wings to breakthrough, the Falcons could well fly again this term.