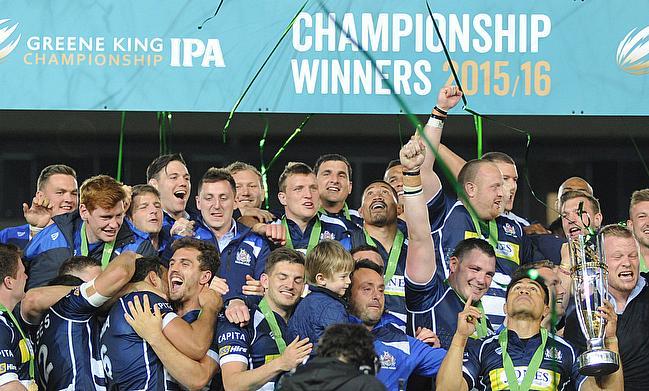 The 2017/18 Greene King IPA Championship season was launched at Twickenham today, with all 12 clubs in attendance.

The launch was hosted by Tom May and the visiting press also heard from Nigel Melville Irvine as well as Hartpury College coach John Barnes and Bristol’s Pat Lam.

Barnes, who guided his side to 30 straight wins on the way to promotion from National One last term, told the England Rugby website: “Last year was a fantastic year, we never thought we’d go the season unbeaten and win promotion but when we got to that promotion stage it was sheer elation.

"To then finish the season unbeaten was a fantastic achievement and we look forward to the step up and the challenge that awaits us in the Greene King IPA Championship."

College begin life in the third tier of English rugby against Bristol, who have recruited heavily this summer as they bid to make an immediate return to the Premiership.

Pat Lam, who is preparing for his first season in charge at Ashton Gate added:  “It’s great to be involved in the Greene King IPA Championship, I look at the teams we are going to be facing and the venues we are going to be playing at and it’s very exciting," said Lam

“We have a clear vision at Bristol Rugby of where we want to go. We have three main objectives: we want to be a Champions Cup team, we want players playing for England and number three we want a lot of young Bristolians coming through and playing for Bristol.”

"For that to happen it’s all about the quality of our rugby programme as well as coaching staff and if we get that right we’ll go a long way to achieving what we want to achieve."

TRU contributor Arun Watkins has analysed each side in this season’s Championship and assessed their chances of success over the next nine months:

It seems only yesterday that we said goodbye to the 2016/2017 season and welcomed the returning Bristol as they reset their squad and dust themselves down after a tough year in the top flight.

No other league except the one dubbed “the wild west of professional rugby”, can offer as much of an eventful season as the GKIPA Championship.

However, this season will no doubt be as eventful, as the last. In my view, there are more reasons to be excited. Personally, I can’t wait for kick off and I fully expect excitement throughout and a nail biting finish to the season.

A budget that is still of Premiership standard and they will be focusing on a return to the big time. The club is already planning for the 18/19 season and so 17/18 is obviously not at the forefront of their mind.

Another season of solid recruitment and retention ahead for Ealing with signings of London Scottish start Pete Lydon and Carnegie talisman Seb Steggmann. The squad boasts some of the best players the championship offers. Although they won’t be close to troubling Bristol, they will be a tough test.

After two seasons of Level 2 obscurity, the Exiles are ready to put a statement of intent on the Championship with players such as Ben Mosses & Fraser Lyle joining the Kew Bridge Outfit.  The club are restructuring their format and a planning for the future, but they will be much more competitive in the league this year and they are my outsiders to go up. I am sure that they will cause a storm in the rugby’s second tier.

Following financial troubles in 2016/17 which hampered the club for the first part of the season, the islanders managed to finish 5th in the division thanks to a strong finish and the highest in the club’s history. With even better recruitment this year, my money’s on the Reds to yet again make their own history by finishing in what would have been a play-off spot come the end of 2017/2018.

Doncaster are again going to be a force to be reckoned with especially after gaining the signature of Junior Bulumakau. The Knights will be solid throughout this campaign and although they have a strong squad, they struggled at the end of last season to hold onto that top four spot. With recruitment and quality of the sides predicted above, personally I don’t feel they have quite what it takes to break into the top four. Even though I don’t see them dominating, they certainly won’t struggle in the wild west.

A season where experienced pros Tom Lindsay & Lee Dickson join the club, Bedford will hope that their squad can fare slightly better than the previous campaigns. I believe that this season will see the Blues not unduly trouble the big boys so mediocre mid-table position is what I expect.

College, have also had some solid recruitment, but I believe that now in a professional league, they won’t be able to challenge the big sides. Their squad will be competitive, but they will find it tough against team that have proper professional infrastructure in place opposed to being a side that plays under the brand of a university. Although College won’t struggle, they won’t coast either and lower mid-table is where I think they’ll end up.

Yorkshire Carnegie have had a troublesome time in this off season with a lack of clarity as to where they will play their rugby and also how financially sound and secure the club really is. With a portion of their squad that reach the play-off final last season now gone, many who have joined have signed on one year deals.  However despite this, they still have a sound system with the likes of George Watkins joining from Jersey. Carnegie shouldn’t struggle in this league; they just won’t be a leading light.

In their third season at the Lady Bay, the Green & Whites would be hoping to improve on their 9th place last season. However, I don’t believe that will occur as in my opinion, the overall squad quality has pretty much stayed the same. With the likes of TJ Harris off to Wasps, Notts have brought in Samoan Aniseko Sio; a player who is solid and will surely provide some quality to the squad following Harris’ departure. With many fans expecting Notts to be in a relegation battle, 9th would be an admirable achievement for Ian Costello’s men.

Sorry Pirates fans, I don’t feel that Cattle & Pavey have done enough to preserve what would have been a top half finish last season. With not many impact signings in the squad, and the loss of Rob Ellowa, it looks like it will be a difficult one for the Penzance crowd.

Oh Roth, Roth, Roth….. is anything straight forward up in South Yorkshire. The club were in complete disarray with a bottom place finish in 11th last season, but the side have rebuilt and have been reconstructed under former Leicester Lions man, Andy Key. With the signings of Matt Shields and Ifereimi Boladau, who are both solid players, the Titans shouldn’t struggle as much this year although it will be a long campaign.

Richmond struggled last season and were lucky that many sides (including Rotherham) lost points due to the demise of London Welsh. The side that is completely part-time, will struggle to survive especially with the loss of three key players in Sam Stuart, Adam Peters & Rupert Harden. Although some sides do factor in a degree of semi-professionalism in their squads, they do have either a majority of players who are full-time or some full-time players in their squad. Richmond is different in that sense, and in my opinion, we will see them relegated or at least struggle to stay up. I am happy to be proven wrong though, as I have a soft spot for Richmond!