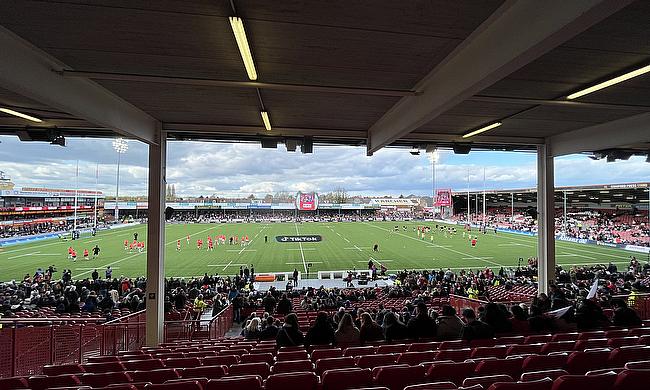 England set the records for a hame attendance with 14,689 fans making it to Kingsholm
©JH34M

HSBC Men's World Rugby Sevens Series - Singapore - Day 1 Wrap Up
Marcus Smith: 'I learned a lot of lessons about myself'
Emma Sing Exclusive: “Every opportunity I get I try to take it with two hands”
TikTok Women's Six Nations Round 2 - Wrap Up

Over 14,000 fans made their way to Gloucester to watch as the Red Roses beat Wales 58-5 and keep pace at the top of the TikTok Women’s Six Nations table, beating a Wales side that have opened up their own campaign with two wins.

For the opening 10 minutes, Wales very much stood firm at Kingsholm, their work at the breakdown thwarting the attempts of England finding the try line, whilst neither team was able to get their set piece functioning.

England opened the scoring after a lengthy stoppage of play as full-back, Abby Dow, received treatment for a leg injury. With a chill in the air in the West Country, players kept warm with a series of drills on the turf before getting back to it.

The very next play of the game saw Lark Davies crash over the whitewash, the Loughborough Lightning hooker latching on at the back of the maul to dot down.

Zoe Harrison was unable to slot the conversion from out wide but would do so for Abbie Ward’s try shortly after, the Bristol Bears lock powering over following several drives from close quarters.

Ioan Cunningham's Wales had a brief glimmer of hope after, Jasmine Joyce with a loose ball at her feet, but unable to produce any of that magic we have become so used to seeing from the flyer on the sevens circuit.

It was a missed that Wales were left to rue, England finding their way to the try line once more before the half was up. It was the pack that architected the try, the maul drawing in more and more Welsh defenders, to the point that the only option was to go wide.

Well played today @WelshRugbyUnion, all the best in the rest of your @Womens6Nations campaign ?? pic.twitter.com/C92iZvloP1

Lucy Packer fired the ball out to Harrison, the ball shipped on to Helena Rowland and then Ellie Kildunne who did just enough to attract red shirts to her, the early replacement passing to Jess Breach to score in the corner.

Not long into the second half, the Red Roses had the bonus point secured, Lark Davies again latching on the back of a maul. Jess Breach secured a brace too, the wing placing down in the corner with her teammates garnering enough attention from their opposite numbers.

For both sides the toll of the game began to show, with a slew of substitutions coming for both sides. But after all this interchanging it was back to business as usual, Sarah Bern adding a try to her collection after receiving a pop pass at the back of a maul.

Wales replacement lock Natalia John was sent to the sin bin shortly after Bern’s score, England using that extra space to score perhaps the try of the game through Alex Matthews.

The Worcester back-row received the ball out wide from Rowland with an inside ball, before planting Kayleigh Powell to the ground with a hand-off and diving over in the corner.

Kingholm erupted as Kelsey Jones registered a try for Wales, the Gloucester-Hartpury going over the line thanks to her forwards’ work at the maul, Keira John unable to convert that score to reward the visiting team any further.

Undeterred by their defensive lapse, England scored quickfire tries through Shaunagh Brown and then Emily Scarratt extending the England lead. To close out the game, it was somewhat appropriate that it was the skipper to bookend the game with a score of her own, Sarah Hunter diving over with the clock in the red.

On the stroke of full time Sarah Hunter goes over for the #RedRoses! pic.twitter.com/JvGguGfNZx

When you look at the final scoreline, it is difficult to think that Wales were coming into this clash off the back of wins against Ireland and Scotland. But for all of the improvements that have happened in recent weeks, let alone the introduction of full-time and retainer contracts, England proved beyond any doubt that they are the team to beat.

Simon Middleton’s team were nothing short of ruthless once again, scoring 10 tries against their opposition. This happened after a first half in which the away side only conceded three times and started the game much the brighter.

In reality, it was only after Abby Dow’s serious leg injury that Wales lost all momentum. Up until that point, Siwan Lillicrap’s team had the better of the game at the breakdown, in the lineout and at the scrum.

Left out in the cold to run drills in the feign hope of maintaining their intensity was ineffective, England’s first try coming less than 30 seconds after Dow had left the field on a stretcher to rapturous applause.

Having been present two years ago when England hosted Wales at the Twickenham Stoop, it was clear to see that some of the same problems plagued Ioan Cunningham’s team.

Wales were consistently put under undue pressure as a result of being able to clear their lines properly, with no player with the ability to do so effectively. Look across to the England side and you could look to all of Zoe Harrison, Helena Rowland and Emily Scarratt to do that role.

This is perhaps where the contracts will prove their weight in gold, with players able to hone their craft to a greater effect. Very much at the start of their journey, the best is yet to come and this reality check after two unexpected wins will serve the group well as they continue to develop.

When it comes to England, they once again used their superior power well and were worth the winning margin when the final whistle was blown. But, is that the sort of score line we were expecting at the start of the day? Yes. England are the world’s number one side.

As the number one side, England played in front of a crowd befitting their stature. 14,689 fans made their way to the West Country, and whilst a significant number of those had come from Wales, it served as confirmation that there is a keen appetite for women’s sport at the elite level.

It was deafening at times, a DJ keeping the team entertained during the quiet spells, there was a real carnival atmosphere to Kingsholm, and it whets the appetite for more.

If anything, nearly 15,000 people seems pretty tame and you can only home that in two weeks time when England host Ireland in Leicester, Mattioli Woods Welford Road will beat that home Test record by a significant margin.

Because, simply, England are the best team in the world.