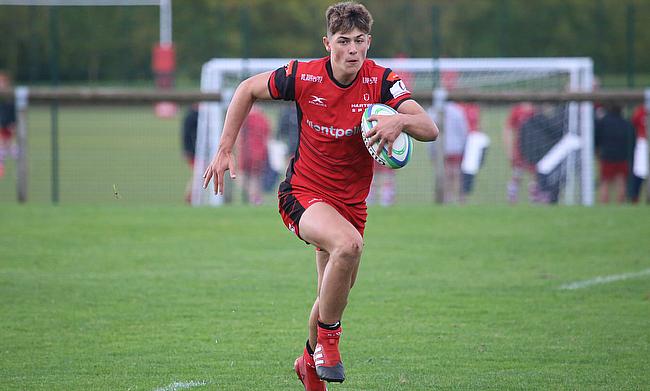 England’s Jonny May: ‘We want to be a better team than the last time we played’
Louis Rees-Zammit: 'I’m sure Jonny will be excited to play against me - and I’m the same'
Exclusive: Stephen Varney - We are dying to get a victory
Wales include Louis Rees-Zammit and Nick Tompkins in Six Nations squad

In the late summer of 2017, Louis Rees-Zammit - a 16-year-old rugby starlet from Llandaff who had been making waves in Cardiff age-grade rugby - arrived to study at Hartpury College in Gloucestershire.

Fast forward less than four years, and rather than just being known by those within the Welsh age-grade system and the coaches at the College, he is one of the names on the lips of all Six Nations fans and is likely to be lining up for Wales against England in the Principality Stadium on Saturday afternoon.

The 20-year-old Gloucester winger has bagged four tries in his first six international Tests and a few days ago, England speedster Jonny May - who also studied at Hartpury, but many years before - said: “Louis is absolutely rapid, he is going to be a world-class player.”

So, was Rees-Zammit always destined for the top?

“It can be difficult to judge a player when they come in at 16 because they are often maturing both mentally and physically at that stage, but what set Lou aside was his speed and also his athleticism and height,” Wayne Thompson, the Junior Rugby Academy Manager at Hartpury College, told TRU.

“You get a lot of students coming in at that age who have not specialised in any positions as yet, but are quick and have good footwork.

“The fact that Lou was also athletic and tall by that age set him apart a bit and you could tell from quite early on that there was something special about him and that he fitted the mould of a modern day back three player perfectly.

“We are lucky at Hartpury in that rugby is integrated into all of the courses when the guys come to the College, so whether they are doing A-Levels, studying agriculture or the BTEC in Sport like Lou was, they always have time during the week dedicated to just rugby.

“He would have been involved in three rugby training sessions at Hartpury per week as well as matches on a Wednesday while he had additional support from Gloucester once he linked in with their Academy while he was still with us.

“When he first joined us, he had played quite a bit at centre coming through the Cardiff age-grades because they were keen to get him on the ball as much as possible, but because we play quite an expansive game at Hartpury throughout all the levels, we were able to get him the ball out on the wing.

“Wing was always going to be his long-term position given his pace and power and when he got into space, he was so dangerous, so I think us putting him out there in his early days at the College helped him to learn the position a lot quicker and really focus on it.”

“He is a lovely lad who is always willing to learn.”

The games Thompson mentions were in the AASE League - now known as the ACE League - and they pitted Rees-Zammit and his teammates up against other further education colleges, most of which are linked to English Premiership clubs.

“It is a good standard of league and at 16, 17, 18, it really tests players and helps them move their game on,” Thompson continued.

“The key thing for us at Hartpury is exposing up-and-coming players to an environment between the ages of 16 and 18 where they are surrounded by other good players.

“In a school team, for example, these guys might be the star player who has to do everything for the team, but at the College, it is the strength of the group which pushes them all on to become better and constantly work at their game.

“Lou was one of those players who liked to be pushed and, although I perhaps didn’t think it would happen this quickly, I always thought he could go on and play at a high level.

“I like to think that the environment we create at Hartpury helps individuals fulfil their potential further down the line.

“He was always a very down to earth guy. He is a lovely lad and was always willing to learn. Academically he worked hard and he always gave 100 per cent on the pitch and remained calm as games unfolded which is a trait that has probably served him well as he has moved up the levels.

“While he was with us during his two years [2017/18 and 2018/19], he began his link-up with Gloucester and while others from his College team went on to Hartpury University, it was clear he was going to focus on his rugby and it looks like he has certainly made the right choice.

“Stephen Varney, who is now playing for Italy aged just 19, was in the same College team as Lou at Hartpury and we take great pride in them both doing so well in their rugby at such young ages.”

Wales v England in the Six Nations kicks-off at 4.45pm on Saturday and is live on BBC.