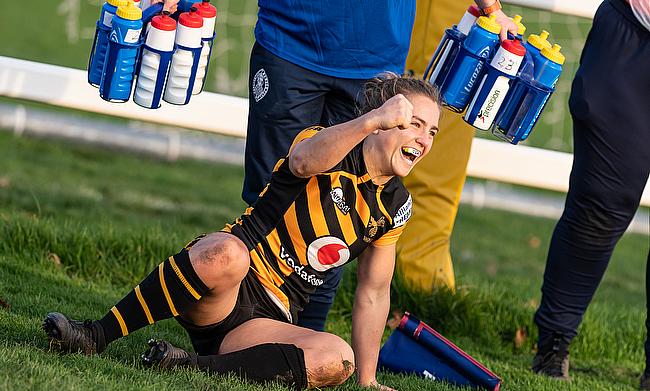 England international and Wasps’ star Claudia MacDonald has often had her sporting career described as a “whirlwind” journey.

The former netballer first picked up a ball in her first year at Durham University, spontaneously joining a training session with no expectations of where rugby would take her.

Fast-forward six years and the 25-year-old has represented DMP Sharks and Wasps in the Premier 15s and signed a full-time England contract.

Her rapid rise from student to international playing level lends itself to an engaging story, but for MacDonald, if anything, her trajectory was too gradual.

“When you look at something retrospectively or externally, it always seems impressive, but when you’re the person living it, it almost feels too slow because you want everything to happen there and then.”

This ambition drove her to be proactive in securing a place in the England squad, notably phoning backs coach Scott Bemand after initially missing out on selection.

From @durham_uni netball to becoming a Red Rose ??

“I called him and asked what I could do to get in the team. He told me to go away and score some tries, so I went and scored seven in three games.

“We then had conversations back and forth where he’d give me a challenge, I’d go away and prove that I could do it, then he’d set a new one.”

Bemand’s targets for MacDonald, still known to him as “the netball player”, eventually ended with an invitation to an England camp, but as a scrum-half potential.

The decision left the then winger with another obstacle to overcome; that of learning a new position.

“Being at scrum-half didn’t naturally fit with my skillset,” MacDonald said. “The fitness was different, passing wasn’t my strong point and I didn’t understand the game from a scrum-half’s point of view.”

Arriving at the camp after playing at number nine just four times previously, the occasion was marked with pride that soon turned to “a lot of frustration”.

“The second day was an absolute disaster. I was on a team with Katy Daley-Mclean. I knew her from DMP Shark. She was at ten and I was at 15, which was a completely different relationship as I was playing off her and she could give me instructions, but at scrum-half, I was the one serving the game up to her.

“No matter how much I looked at the moves or the structure that we were trying to play, I just couldn’t put A and B together.

“You put pressure on yourself to be the perfect performer, but when you don’t necessarily have that understanding of the game, it’s very difficult.”

Despite these setbacks, MacDonald’s relationship with the scrum-half position changed significantly through coaching from Wasps’ director of rugby, Giselle Mather.

6?Wasps Players have been named in the upcoming @EnglandRugby @Womens6Nations squad.

For her first six months at the club, Mather only allowed her to train in this role, shifting MacDonald’s mindset from a back three player to a number nine.

“I play like a scrum-half who sometimes plays on the wing rather than vice versa. I finally feel like I fit the shirt and that I can influence the game.”

With 12 England caps to date, MacDonald is playing at a time where the profile of women’s rugby continues to grow.

She joins Mather, who has been vocal about broadcasting the Premier 15s, in campaigning for domestic and international women’s matches to be televised in the near future.

Whilst the Women’s Six Nations’ new spring-time window will offer a separate schedule to the men’s competition, MacDonald stresses how work still needs to be done to achieve parity with the men’s game, particularly in terms of media coverage.

She points out that it is not only the number of televised games that needs to improve but also the quality of the broadcast.

“The men’s game has more cameras so that they can get those close-up shots of the inside of a scrum. The change of angles creates tempo in the game and it feels more important.

“In the women’s game with just two cameras, it’s harder to create that rhythm and excitement. It’s always going to look lesser than the men’s game when the quality of the footage isn’t as good.

MacDonald has also turned her focus towards sustainability through her “Let’s Talk 1%” blog, finding that the “marginal gains” side of sport can be directly applied to environmental actions.

“To improve a team’s performance, every single player has to improve something by a small amount,” she added. “In rugby, you want your wingers to be slightly faster or your props to be slightly stronger. If everyone makes a small change and becomes that little bit better, your team’s chances of winning are far greater.

“It’s about applying the same idea to sustainability. If every individual makes a small change, it will have a larger impact.”

Let's Talk 1%: Transport
This month was about questioning how I got from A to B. I dropped the car, and instead used my bike, feet and public transport as much as possible.
Read more about how I got on in my blog post: No Car No Cry. Link in bio. #1percent #blog #writing pic.twitter.com/CgTznWQv9j

The scrum-half also highlights how the platform afforded to top athletes could be used to promote eco-friendly ideas.

“[Lionel] Messi, for example, will go out and wear new football boots and suddenly they’re the most popular pair in the world,” MacDonald says. “If he started using a reusable coffee cup and promoting it, people would think it was cool and would want to use one.

“If sports stars attach themselves to sustainable efforts, it can impact a much wider audience.”

Although she’s already reached the heights of international rugby, MacDonald continues to set career goals, including winning the Premier 15s with Wasps and being the starting scrum-half for the rescheduled 2021 World Cup.

“I don’t think I’ll feel complete until I’ve gone to a World Cup,” she said. “You want to know that you’re taking to the field because you’re the best option in that shirt and that you have the ability to win the game.

“That’s definitely the next big goal, so hopefully I can earn that shirt and keep improving.”