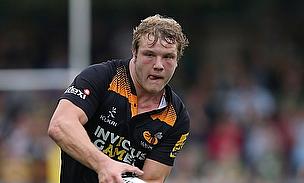 Rugby director Dai Young says he would be "surprised and disappointed" if England lock Joe Launchbury decides to leave Wasps.

Young expects Launchbury to sign a new contract by the end of the month, and believes Wasps have done all they can to convince the player to stay.

It is understood that Saracens are among the clubs monitoring Launchbury, out of contract next summer, but the recent announcement of the move to Coventry's Ricoh Arena has put Wasps in a strong bargaining position with a "sustainable" financial future ahead of them.

"We'd be surprised and disappointed if he leaves, but there are no guarantees in life," Young told Press Association Sport.

"We had to demonstrate to Joe that this is the right place for him to stay, first and foremost.

"We had to have a competitive squad, enough players in his position. He won't be overplayed. We've got to have ambition as a club, playing in the top tournament - and the last thing really was we had to be sustainable, not relying really on the generosity of one person.

"So we've pretty much ticked all the boxes, I believe.

"That doesn't mean to say that Joe or all our best players are going to stay, because that's life, but certainly from my point of view I think the club have done as much as they could to keep our best players, Joe being one of them.

"It was never planned to talk until the middle of October, so over the next couple of weeks we'll start talking, and we should have a real steer by the end of October whether it's going to go positive or negative.

"But all the vibes we have at the minute are quite positive.

"I would never criticise a player for leaving, but I don't see any reason to leave now, not now everything's going in the right direction.

"Joe has been the backbone of this team and helped keep it afloat: so it would be really nice to see him achieve something here.

"I know he thinks the world of this club, and is very respectful and thankful for the club giving him the opportunity to put him back on the map.

"He's had all his England caps from here, so it's not as though he hasn't achieved what he wanted as a player, even through difficult times."

Young has admitted that during difficult times for the club, he went without pay for three months and kept the club's financial plight from the players.

He dipped into his own pocket to buy supplies and even had to pay for the team bus on occasion.

Now he hopes that Launchbury will reward new-found stability by pledging his future to the club.

"I didn't actually get paid for three months - that's the reality," Young said.

"There were a lot of things going on behind the scenes that the players didn't realise.

"It was a big burden because at the time we were fighting relegation and trying to convince players to stay.

"I had to buy tape a couple of times and actually had to pay for the bus once.

"I got all the money back in the end, but at the time we just didn't have the cash to pay for these things.

"I never wanted to tell players, 'we haven't got the money'.

"I've got a real loyalty to a lot of these players. We've been through a lot together, and, as things start to become rosier both on and off the field, nothing will give me more satisfaction than watching them achieve big things.

"I never contemplated walking away. Once I step into something, I step into it 100 per cent."

Wasps have also confirmed that their first game at the Ricoh Arena will be the Premiership clash against London Irish on 21st December.