Bath leave it too late against Wasps 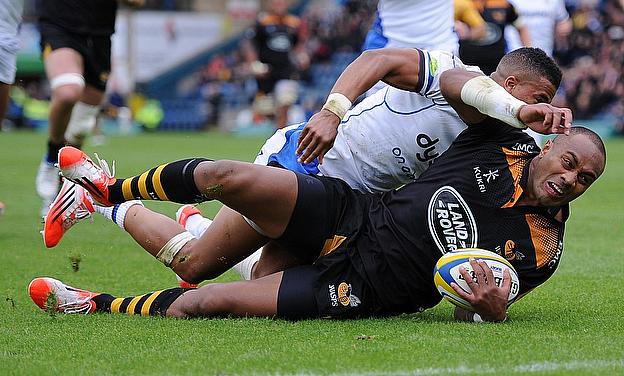 Andy Goode toasted Wasps' December move to his home city's Ricoh Arena with a 16-point haul to consign Bath to just their second Aviva Premiership defeat of the season.

Wasps also won a penalty try when Micky Young tackled Christian Wade as the England wing chased down a loose ball with the goal-line at his mercy.

Jonathan Joseph, Young and David Sisi hit back with tries as Bath secured a losing bonus point, but Wasps summoned the resolve to hold out.

Nick Eastwood was braced for an angry response to Wasps' Coventry switch at Sunday's game.

The chief executive had called on dissatisfied fans to "throw the eggs at me" rather than abuse players, but the resigned crowd knew no amount of back-biting could reverse the decision.

Wasps claim the Coventry move staves off any lingering threats of administration, after the club feared bankruptcy 18 months ago.

Many London-based fans will boycott the 90-mile trip to Coventry required to continue supporting Wasps, but the commotion generated a gate of 7,397 - the highest of the season.

The club's stars, however, were clearly boosted by securing a permanent home. Bath number among this term's play-off hopefuls, but found few answers to Wasps' set-piece.

England lock Joe Launchbury was a late Wasps withdrawal after a minor car accident, so James Gaskell stepped up from the bench.

Ashley Johnson's turnover denied Bath an early score, before the visitors had Kyle Eastmond's try chalked off after midfield crossing.

Wasps' pack then demolished the much-vaunted Bath scrum to win a fine penalty, only to waste the 22 platform after opting for an attacking line-out.

Prop Wilson joined the line at the inopportune moment as Bath sought that elusive first try at the second quarter's opening.

And Bath's frustrations grew when Wasps shredded their scrum again, Johnson completing the visitors' ignominy by stealing the ball at the set-piece base.

Wasps bullied Bath at three five-metre scrums, before the visitors somehow held Hughes off their line.

Masi ghosted into acres of left-wing space as Bath's last-ditch defence grew ever narrower, but Goode shanked the cross-field chip.

The hosts settled for Goode's third penalty, however, in stretching the lead to 9-0.

Houston was then sent to the bin for flipping Joe Simpson onto his head off the ball, with Wasps dominating Bath's seven men at the next scrum.

And centre Daly launched his long-range penalty just over the bar to close the half.

Goode extended the lead to 15-0 with his fourth penalty to open the second half, after Bath prop Wilson was sin-binned for a trip.

Bath's day degenerated again when replacement scrum-half Young was sin-binned for tackling Wade without the ball as the England wing honed in on the try-line.

Referee JP Doyle had little option but to award the penalty try and Bath's third yellow card of a wretched afternoon.

Bath's immediate riposte came through Joseph's try, and Young atoned for his yellow card with a score of his own.

Ford converted to leave the scores 29-12 with 15 minutes to play.

Replacement flanker Sisi capped another Bath raid as Wasps continued to fade, with Ford cutting the deficit to seven with a late penalty.

Wasps were not to be denied, however, grinding to victory despite ever-increasing duress.