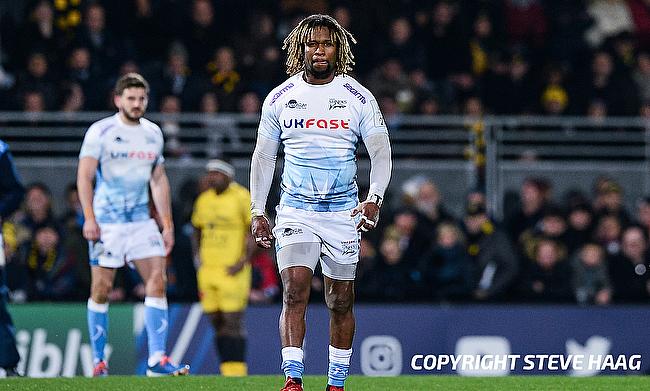 Marland Yarde was the star for Sale Sharks
©Steve Haag

The win has taken Sale Sharks to the second position in the table with 31 points while Leicester's trouble mounts after suffering their seventh defeat from 11 matches this season.

Noel Reid kicked a fourth minute penalty for the Tigers but they soon suffered a setback with Dan Cole sin-binned for three successive penalties.

Sale Sharks failed to score a point despite an additional player advantage but soon took control when the Tigers returned full strength with Bryn Evans touching down after charging a kick from Leicester's Jack van Poortvliet in the 29th minute.

Robert du Preez missed the conversion but ensured he added the extras in the next two tries from Yarde (33') and Coenie Oosthuizen (39') as the home side finished the first half strong with a 19-3 lead.

The visitors had their second yellow-card at the start of the second half with this time Reid sent to sin-bin for a high tackle on Yarde with du Preez's maiden penalty goal in the 54th minute made the scoreline 22-3.

Yarde ensured there was no comeback chance for the Tigers as he went over the line in the 69th minute and touched down again in the 72nd minute to complete a hat-trick while Du Preez slotted the extras on both the occasions to ensure Sale Sharks completed a convincing 33 point victory.

“The weather conditions weren’t great today. The first 20 minutes we probably made a few too many errors, but we just stuck to our game-plan," said Yarde.

"We minimised our errors in that last 20 of that first half and I think we converted some good tries.

“I think we’ve just got to focus game by game. We’ve got a knack of winning one and losing one at the moment, but we’ve got some quality players here. It’s just about the next game"