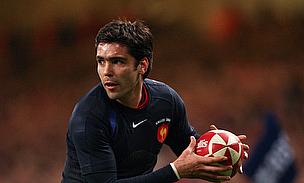 What next for French rugby?

Former French international scrum-half Dmitri Yachvili has announced he will retire at the end of the 2013/14 season.

The 33-year-old played for France in the 2011 World Cup final defeat to New Zealand and enjoyed a successful club career with Biarritz having started his top-flight career with Gloucester in 2001/2.

His final appearance for Les Bleus came in the 2012 campaign.

His retirement was confirmed on Biarritz's website, where a statement said: "Dimitri Yachvili told (Biarritz president) Serge Blanco on Thursday evening of his decision to bring his career to an end.

"It's with great emotion that Biarritz sees a great champion, who has given so much to the Red and White, retire from the rugby field.

"After his titles as champion of France in 2005 and 2006, his two Heineken Cup finals in 2006 and 2010, an Amlin Cup in 2012 but equally a title as vice-champion of the world in New Zealand, we wish Dimitri much success in his new life as a businessman."

Biarritz have been relegated from the Top 14 for next season and he told L'Equipe that he feels now is the right time to call it a day.

"It's the right moment for me to put an end to my career. I feel that my body needs to stop."