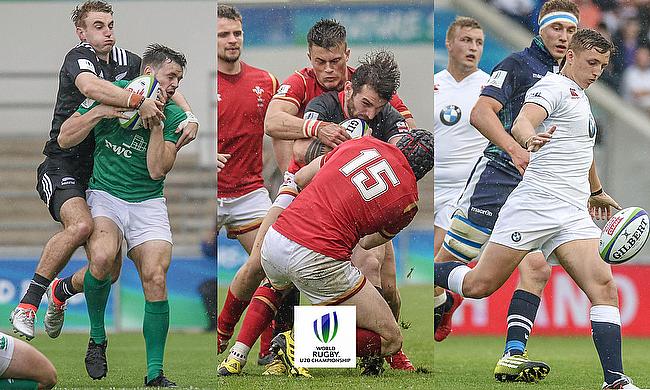 The second round of games in the World Rugby U20 on Saturday at the at the Manchester City Academy Stadium saw thrilling encounter between Wales and Georgia, Ireland pulling of an upset against New Zealand and England dominating Scotland.

Ireland earned a phenomenal win over the Junior All Blacks at the Manchester City Academy stadium, thanks largely to a phenomenal effort from their monstrous pack in the torrential Manchester rain.

The Irish went into an early lead thanks to a penalty from fly-half Bill Johnston.

They were quickly pegged back though, a brilliant line ran by Jordie Barrett resulted in him crashing over from close range, the All Black inside centre then got up to convert his own score and give his team the lead, 3-7.

Johnston added another three for the Irish but it was cancelled out shortly after by a phenomenal piece of skill from All Blacks winger, Shaun Stevenson. The Waikato Chief chipped over the top of the on rushing Irish defence, collected, and stormed in under the posts.

With Ireland back to their full compliment of players after a McBurney yellow, their set piece began to assert it’s dominance, blindside flanker, Greg Jones peeled off a driving maul and touched down in the corner. Johnston added a tough kick from out wide.

Ireland then went into the lead seven minutes later. Yet again the driving maul proving a worthy tool thanks the the dominance of skipper James Ryan in the jump, it rolled on and then hooker McBurney span off and finished, Johnston converted and made it 14-20 at the break.

Ireland lost fly half, Bill Johnston at the break but replacement Johnny McPhillips kept up the fine kicking form, adding a penalty just six minutes into the second period.

New Zealand sprung back into life five minutes later, Malo Tuitama blindside winger got his first of a second half brace and a Barrett conversion meant the Junior All Blacks were just four behind.

The try seemed to give New Zealand confidence and Ireland were forced to play a lot of the second half on the back foot.

The Irish weathered the storm, and went back to basics and relied on their stalwart set piece, the scrum proved dominant and on 71 minutes, number 8 Max Deegan picked from the back and crashed over into the corner, McPhillips added the extras and Ireland looked to have the game wrapped up.

However, no New Zealand side ever looks beaten and they responded almost immediately. Tuitama grabbed his second after a clever quick penalty from replacement scrum half Jonathan Taumateine, Barrett added the extras which meant Ireland held a six point lead with five minutes left to play.

Ireland defended astutely in the closing stages, and McPhillips added another three points to seal the game after yet more dominant scrummaging, full time 24-33.

A poor game in horrid conditions meant a closer than expected win for Wales, largely thanks to an early try from tight head prop Leon Brown.

Brown’s try came just five minutes into the game and was converted by fly half, Jarrod Evans. Many would have thought the score would set Wales up to begin a rout against the European minnows but that was far from the case.

The Georgians defended astutely and on the half hour mark got their first points of the tournament through the boot of scrum half Gela Aprasidze.

The score sparked a belief into Georgia and they had Wales on the back foot, Georgia got a deserved second penalty on the stroke of half time and Aprasidze once again slotted the ball between the uprights which meant the Georgians went in at the break just a point behind.

It took 15 second half minutes for the first points, Jarrod Evans a sure head to add three points from the kicking tee and give Wales the four point lead.

Ten minutes later, Georgia went back within a point, sure shot Aprasidze adding three points from long range, and the momentum was back with the under dogs.

With captain Gorgadze leading from the front, Georgia were pushing for a score that would give them the lead, whilst the Welsh defence rarely looked like being broken down, they were giving away penalties.

The moment came for Aprasidze on 74 minutes to send his side on their way to a historic win, but his attempt at goal fell short, and Wales managed to hold on throughout the closing stages.

Wales face the Junior All Blacks next, and both will be striving for a much improved performance.

A dominant England side picked up from where they left off last time out as they continued to look the tournmant favourites with a 44 points to 0 win over rivals Scotland.

Scotland fly-half Blair Kinghorn missed two early opportunities to give his side the lead with the boot, and didn’t get another chance for the remainder of the opening 40.

Harry Mallinder opened the scoring for the hosts on ten minutes, and doubled it shortly after.

Despite being dominant, England failed to capitalise again before the break.

After the break, the impressive England picked up where they left off, but were still failing to clinical.

It took fifteen second half minutes to get the first score, but after much deliberation, the referee awarded a try when it seemed as if openside and debutant, Will Evans had slid into touch. It was given and Mallinder once again converted.

Just three mintues later the boys in the red rose had another score, and a fine one at that, inside centre John Williams hitting a sharp line to finish off a brilliant move under the posts, leaving Mallinder with an easy two, 27-0.

A late driving maul on 75 minutes resulted in substitute Jack Singleton getting on the scorecard. Max Malins added the conversion and another penalty shortly after to make it 37-0.

Malins capped off his short cameo performance with a converted try of his own, to make the final score at the Manchester City Academy Ground, 44-0 to the tournament hosts.

Andrew Porter (UCD/Leinster) – An animal of a young loosehead prop. The Leinsterman gave his opposite numbers a terrible day at the office and even put in a brilliant shift around the park too as the big prop lasted the full 80 minutes. Porter was just one cog of a domiant Irish scrum machine but helped provide the platform for a famous win.

James Ryan (Lansdowne/Leinster) – Ireland captain for the day, lead from the front. Giant led at the line out and was everywhere around the pitch. He took an absolute battering, and came back with everything he got, Ireland know how to produce a good lock forward, and this young man looks another off of the production line.

Will Evans (Leicester Tigers) – The red rose openside was a constant thorn in the side of his highland opposition. The Leicester Tiger was a constant nuisance at the breakdown and even added a try on debut to cap his performance. He was described post match by head coach Martin Haag as ‘phenomenal’ and certainly looks like the modern ‘7’ that England have been crying out for.

Johnny Williams (London Irish) – The London Irish centre showed off all the experience he had picked up during this season in premiership today, solid defensively and knew exactly what to do and when to do it in attack. An honourable mention must go to his inside man, England fly-half Harry Mallinder who directed his team around the park with his kicking and was near perfect from the tee to pile pressure on Scotland.

Team of the day

Ireland. Brilliant team performance based upon the foundation of a mammoth pack. They kept the flair of the all blacks quiet, forced mistakes and took their chances. The win was the first ever win for a male Ireland national team over New Zealand.