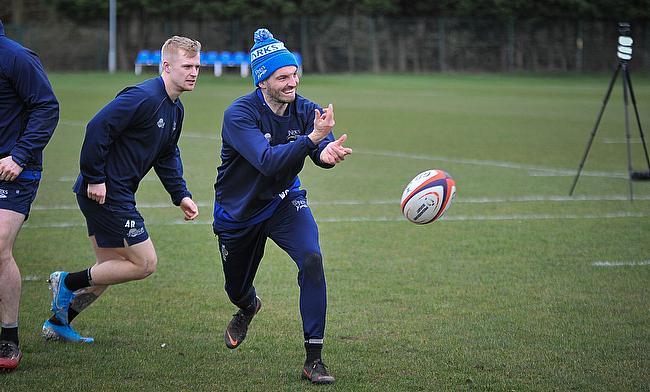 Whilst the Premiership is only three rounds old, Sale Sharks have already experienced every emotion that there is on the rugby pitch.

Opening their season with a win over Bath, a draw with London Irish in Brentford and a loss at the hands of Exeter Chiefs in Manchester, Alex Sanderson’s men have certainly had their fair share of positives and shortcomings so far.

On paper, those results have little meaning. The victory over Bath was maligned by a poor second-half performance, the draw with the Exiles came after a loss of control following the interval and a red card for Rohan Janse van Rensburg meant the game slipped away from the Sharks against Exeter.

Hanging on for dear life in their opening two fixtures as the referee looked to blow the final whistle, it was only when space opened up following the red card on Sunday that Exeter took control of the tie. So far this term, the underlying theme for Sale is they have struggled to exert themselves on opponents for 80 minutes.

“We actually felt like this week it was probably more of a 60-minute performance, with maybe 20 minutes in the middle which we weren’t quite on it for,” sighed Sale scrum-half Will Cliff. “Then, you throw the red card into that as well.

“It is definitely something we know because we saw it with Bath, and we saw it considerably with London Irish as well, so we are putting some thought into it, trying to figure out how we get that full performance.”

"The application and intensity was there, what lost us the game was a couple of brain farts sitting around the half-way line..." ??

An honest Alex Sanderson reflects on a tough day at the office for @SaleSharksRugby. ??#GallagherPrem pic.twitter.com/TcWkrCnb6Z

Starting the last two games for Sale, Cliff is now one of the most experienced players in Alex Sanderson’s squad. Second-oldest in the team at 32 - James Phillips (34) taking the top spot - the scrum-half is very much part of the team’s leadership group and is at the heart of trying to help the Sharks snap back into gear.

“We have got quite a big senior group here now,” Cliff said. “We have got lads who have played for a while and lads who have their opinions and have great input. Everyone is putting their heads together and doing their bit and there is some good direction from the coaching staff.

“It is not one of those things that is obvious, just to flip the switch and then say we are going to play for 80 because every week we go out with that intention. It is not from a lack of trying. It is probably just being smarter in terms of how we manage the game and certain aspects of what we do.”

Playing in a coach’s image

When Cliff began playing professionally for Sale, it was Philippe Saint-Andre at the helm of the club and they were buoyed by a Premiership win in 2006 before a period of uncertainty.

In the years that followed, Sharks drifted to the bottom half of the league table and it was only after Steve Diamond took the reins that fortunes changed in the North West.

Missing out on the play-offs in 2019/20 but winning the Premiership Cup, Diamond left Sale after nine years, citing personal reasons for his departure. His replacement, Sanderson, was another man from the region, returning to the club he left as a player in 2004.

In those 17 years, a lot happened. Sanderson was part of the Saracens dynasty that lifted five Premiership trophies, an LV= Cup and three Champions Cups, whilst Sale largely floundered.

His arrival at the AJ Bell Stadium saw the club reach the Premiership semi-finals for the first time since their title win and offering plenty of highlights in the process.

No longer a club treading the line of whether they would qualify for the Champions Cup or not, Cliff believes that the 41-year-old has brought through the playing group exponentially since arriving in January.

“I think the group has come on a long way,” Cliff said. “We have certainly seen the impact and the mentality he has brought, and from when he first came in, we have been moving in the right direction.

“I would probably say he has brought the group tighter, a fresh energy into the group and I only think you will see that getting better over the season as well.”

The two never crossed paths as players, with Sanderson’s career brought to a premature close due to injury, with Cliff instead watching the former back-row as a fan before his own journey in the professional game began.

“I remember him as a player,” Cliff said. “He was a great player, wasn’t he? He was physical, had a high work rate, all the things that this Sale team is about to an extent.

“The minimum standard is that you have got to work hard. He is phenomenal in the way he presents his meetings, his tactics and everything is gripping and thought-provoking. It really engages the lads.”

Ambitions for this season

Still waiting for the return of Faf de Klerk and Lood de Jager from South Africa duty, this Sale team is only due to get better, and should they crack the code of achieving an 80-minute performance, they are going to cause other sides a lot of issues.

From being a ball boy in 2006 to the Premiership semi-finals.

For so many years, @SamJames560 has lived and breathed Sale Sharks and TRU spoke to a few people who have helped him on his journey to the play-offs ?? #GallagherPrem

Already the depth of the squad is being tested, with AJ MacGinty and Rob du Preez picking up knocks and Cliff getting time as a starter as a result of medical reasons surrounding Raffi Quirke. Denny Solomona was even deployed at full-back against Exeter whilst other youngsters have stepped up to the plate.

“We are in a fortunate position where some of these young lads have played a decent bit of first-team rugby now,” Cliff said. “Like Kieran (Wilkinson) has been great when he has played and come on, but it’s not only in games. When they are training, they are really commanding the position and doing as good a job as the senior boys.

“I think that is one of the huge things that Al has brought to Sale; that trust in the young lads and integrating them into the group and making them feel a part of it and anyone can sort of roll in or roll out. The squad will be tested, but I don’t think that will be to our detriment.”

When Cliff first joined Sale, their Premiership win was still fresh in the memory. Having watched as the Sharks beat Leicester Tigers 45-20 at Twickenham, the hope was the club would regularly be competing for silverware, but what followed was a 15-year wait to be in the play-offs.

Having been at the club for much of that time, Cliff has experienced the highs and lows of being with Sale and he is keen for this period of his career to yield success.

“We did alright the first couple of years when Philippe (Saint-Andre) was still here, and then there was a lot of change,” Cliff said. “I was just excited to be a part of it. I was a young lad, in this environment, just learning, but it was very different to now.

“There are some great memories from then, seeing all those boys lift the Premiership. I didn’t think it would take so long until we were back in the play-offs again. It is certainly motivating because I still look at that team now and see how they achieved something, and we want to be part of the Sale team that does it again.”

It was only back in September that Steve Diamond helped Sale Sharks to their first silverware since 2006.

Today, Diamond leaves the the AJ Bell after 10 years at the club.

He made 290 appearances for Sale as a player.pic.twitter.com/Vdg1vhLhun

This current crop of Sharks travel to Gloucester this weekend and like Sale, the Cherry and Whites have had a frustrating start to the season. Picking up their first win on the road against 14-man Worcester Warriors last Saturday, George Skivington’s men are also seeking their second victory of the campaign in Round Four.

On a personal note, Cliff is aware that his career is now closer to the finish line than the start. Approaching the 150-game mark for Sale, the man from Macclesfield is more certain than ever before about what he wants to do before he hangs up his boots.

“My hopes are to win the Premiership,” Cliff said, bluntly. “I have said that for the last few years. I am part of a group now where I really do believe it is attainable, achievable, and I want to do it whilst I am still playing.

“I don’t want to be on the sidelines in a few years’ time, watching them win it. I want to bring that forward and say, ‘why can’t we win it this year?’ I think everyone in the group is of the same mentality that we are here to really try and achieve something.”