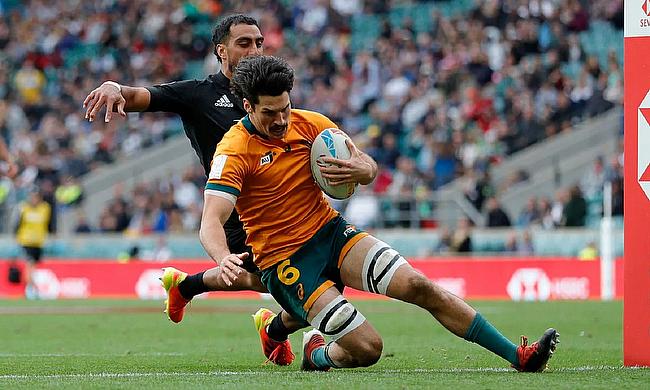 Henry Paterson scored a hat-trick as Australia edged out New Zealand 19-14 in the final to win the London leg of the Men's HSBC World Rugby Sevens Series.

Australia had previously not defeated New Zealand in a final in the last 20 years but they went into the break with a seven point lead as Paterson received a clever reverse pass to touchdown and Dietrich Roache kicked the conversion for the only points in the opening half.

Even though New Zealand fought their way back through tries from Akuila Rokolisoa and Leroy Carter in the 8th and 12th minute, it was once again Paterson, who scored his second try of the game in the 12th minute after gathering the ball at a standstill midway into his own half before showing the pace to go the distance.

With replacement Maurice Longbottom kicking the conversion the scores were levelled as the game entered the final phase and it was once again Paterson, who was the saviour for Australia as he first produced a brilliant try saving tackle and then went on to complete his hat-trick with a dive in the corner in the 15th minute to steer them to a first title win in the ongoing series.

Earlier, Australia and New Zealand were in the same Pool and finished at second and first respectively to progress to the knock out stage. While Australia defeated South Africa and Samoa, New Zealand had wins over Ireland and Fiji to reach the finals.

With the win, Australia now have closed the gap to first placed South Africa to two points. They now have 122 points while South Africa, who won the first four legs have lost a bit of momentum but still are at top with 124 points. Argentina and Fiji are at third and fourth with 118 and 104 points respectively.

The teams now will head to Los Angeles for the final phase of the series to be played on 27th and 28th August.