What are the odds of Exeter winning the 20/21 Premiership title? 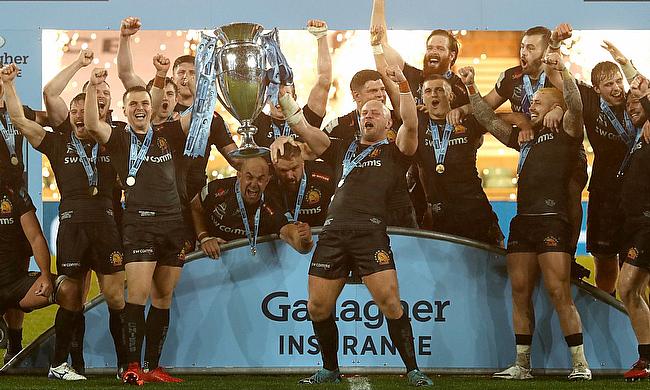 Premiership Rugby is the highest division in the English union system — winning the Premiership is the pinnacle of the national game.

And for the last couple of years, one team has dominated this competition: Exeter Chiefs

Last October, Exeter beat Wasps 19-13 to secure a historic double. And with a triple on the cards this season, expectations are high for them to do it again.

Following an impressive away victory in the 2020/21 season opener against a tough Harlequins team, the Exeter Chiefs appear poised to kick on as they were from last season.

Maybe this is their league to lose. But if the other teams have anything to say about it, the Chiefs are in for a rough ride on route to the title.

This 22 game season is a marathon, not a sprint, and the metaphorical starting pistol has only just fired. Anointing a winner now is quite literally jumping the gun.

With that in mind, we ask: are Exeter’s odds really that good — or are they inflated in awe of previous success? Read on as we compare two types of betting odds to determine the overall likelihood Exeter Chiefs retain the title again.

Though it's a little premature to declare a winner, given the Gallagher Premiership has only just got underway, analysing the betting odds gives a valuable indication of the outright favourite.

Countless pundits and diehard fans have sung the praises of Wasps, Bristol, Sale, Bath and, of course, Exeter Chiefs.

But how do these teams stack up when thrown into the bookie’s algorithm?

We’ve taken a look at the betting odds from two online casinos (old and new) to determine if it really is Exeter’s league to lose, or maybe a wildcard is waiting in the wings ready to pounce.

First up, PaddyPower: we chose this site because it’s a longstanding betting platform synonymous with the major sporting industries (not least because of their Save Our Shirt campaign).

Here’s what the veteran betting platform had to say about the Rugby Premiership:

In the interest of balance, let's also take a look at Fansbet — a new online casino that’s run by fans, for fans. We chose this site because of its grassroots connection to the British sporting fanbase (as recommended on this list of new UK casinos).

To see if this rookie betting site took a different view on things, let’s observe how they expect Exeter to perform against its challengers:

It’s also worth noting Fansbet are predicting a comfortable win at 1/15 odds for the Chiefs in their upcoming fixture against Bath, which (if they do win) will see Exeter pick off a major challenger early in the season.

Summary of the Exeter Chiefs chances

Okay, no matter which way you swing it, Exeter are indeed the resounding favourites.

Winning is habitual for the Chiefs — and it really says something about team mentality when you realise Exeter’s worst performances from the last 2 seasons came about in their title-clinching final wins.

Having a target on their back hasn’t affected their chances previously: so why would it now?

They have a deep and talented squad, primed to strike gold not only in the premiership but Europe too. We side with the bookies and forecast another standout season for this Exeter dynasty.

Henry Slade: Looking forward to getting one over' his Exeter teammates