Major League Rugby has the ability to go far - Hewitt 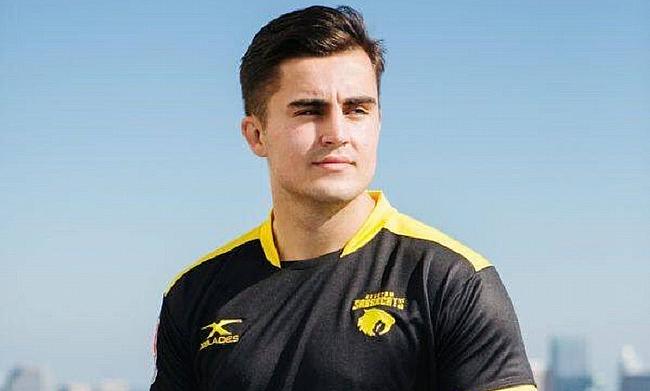 Arnald: The project of establishing this rugby team in New York is very exciting
The sky's the limit for the MLR and new franchise Rugby United New York
Seattle Seawolves lift inaugural Major League Rugby championship
Tadhg Leader on life at San Diego and the impact of Major League Rugby

“I was notified that I was being released form Worcester towards the end of the season," begins Houston Sabercats lock Charlie Hewitt. “There was a reasonable amount of interest, mainly from Championship sides, however there wasn’t one I wholeheartedly wanted to go to.”

A product of Worcester Warriors academy, the 23-year-old’s next step in his rugby career was a move to America for the MLR [Major League Rugby’s] first season. “A massive part of America’s culture is based around their sport, I just had this idea in my head that if this league was to be a success, in America, the potential is limitless.”

Coached by Justin Fitzpatrick, the former Ulster prop, it was the Irishman who played a major part in Hewitt’s decision to come to America. “Fitzy emailed me about the move to America and the idea of a fresh start in a completely new environment really appealed to me.

“It wasn’t so much a case of wanting to leave England. I miss my family and I’m very proud about where I come from. It was more a case of; if I chose not to come over here I’d always be wondering what if.

Having not played rugby in England for so long, Hewitt wasn’t too fazed by the transition of playing with Houston. “There are a lot of fundamental skills we learn in England without even realising and we just take it for granted.

“Once you move to a country where rugby isn’t one of the main sports, you realise there are a lot of finer details that you’ve picked up, that you can help pass onto those who didn’t play as much rugby growing up.”

Playing behind Donnacha O’Callaghan at Worcester, Hewitt has come to Houston with a great rugby education that he feels has added to the professional atmosphere at the SaberCats. “I learnt a lot about work ethic from the coaches at Worcester and players like Donnacha that I aim to demonstrate in training and gameplay.”

Upon arriving at the SaberCats, Hewitt would find that his teammates would include Fiji Sevens legend Osea Kolinisau, who led his country to their first ever Olympic Gold Medal at the 2016 Rio Olympics. “The likes of Osea bring vast amounts of knowledge and he always has a laugh or smile on his face which rubs off well, particularly on the less experienced members of the squad,” continued Hewitt.

Along with Kolinisau, the SaberCats team featured Sam Windsor, a former Ulster and Blackheath fly-half. Windsor finished the season as the MLR’s top point scorer with 103 points, 13 of which coming from penalties.

“Every tight forward likes to know that after burning your legs out to earn a penalty, you’ve got someone there to take advantage and get you some points,” added Hewitt.

Despite an undoubtedly talented squad, Houston only picked up one win in eight games, seeing them prop up the MLR table. Hewitt said: “We failed to close games out in the last third, which we’re looking to correct.

Despite a low finish in the competition, the club’s money men didn’t seem too concerned by where their side finished and in July, they announced that a 3500-seater purpose-built rugby stadium would be constructed in order to take the club forward.

Hewitt added: “It’s great to see how quickly the club is growing. I don’t live to far from the new stadium site, which I regularly see when driving into downtown.”

Hewitt has seen some of his Houston teammates depart since the season ended in July. Fellow lock Justin Allen moved to the Rotherham Titans to play in National 1, whilst USA international Paul Mullen has moved to Newcastle Falcons in the Gallagher Premiership.

“I’m very proud of Paul. I don’t think people realise how far he’s come in a very short period of time. It’s good seeing players getting signed in Europe as it shows that even after one season, this league is already being taken seriously.”

Atlanta and Boston Teams to Join #MLRugby for 2020 Season, Solidifying MLR’s Presence on the East Coast.

For many, the MLR was a huge success so much so it has already surpassed its previous incarnation, PRO Rugby. The success isn’t lost on Hewitt, either, as the lock believes that the league can take America by storm.

“It has the ability to go far. There seems to be a solid structure in place and being one of the fastest growing sports in America, I’m sure that you’ll see it leap-frogging other sports here for popularity in the coming years.”

Hewitt’s point is highlighted by the fact that new sides are being introduced across the States. The likes of Rugby United New York and the Ontario Arrows are poised to join the league this season, that’s before mentioning a New England based side, a Washington DC side and an LA franchise.

“There looks to be a good handful of teams planning to join over the next few seasons, which is exciting for everyone. It will undoubtedly attract more players and interest in the league,” said Hewitt.

“The idea of playing away games, travelling to New York, LA or somewhere like Vegas has to be more appealing than Rotherham away.”