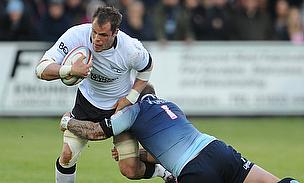 Newcastle Falcon captain Will Welch is happy with his team's form as they prepare to take on table-topping Northampton Saints tomorrow (Friday).

Newcastle could move up to 10th in the Aviva Premiership with a win but that would take a huge upset.

"We are in a pretty good place at the moment.

"To push a quality team like Sarries so close was a good marker of where we are, and had we kept our discipline at times and got ourselves in the right areas we could have come away with the win.

"It is testament to all the boys and how we are playing at the moment that we could run them as close, and hopefully we can build on that performance."

Chris Harris, who scored two tries in that game, comes into the starting line-up to make his first Premiership start on the wing.

Andy Tuilagi will also make his first start for the Falcons, who make seven changes.

And centre Tom Stephenson is not taking the game lightly, saying: "The days of seeing Newcastle as an 'easy' game are gone. They're a team that are on the up.

"They gave Saracens a good run for their money last weekend and we know that they've got big ball carriers on the wing and in the centre and will be a big challenge for us.

"They've got a good coaching team and recruited well over the summer. Going up to Newcastle is always hard, but they've improved on the road as well this season and are playing some good rugby."