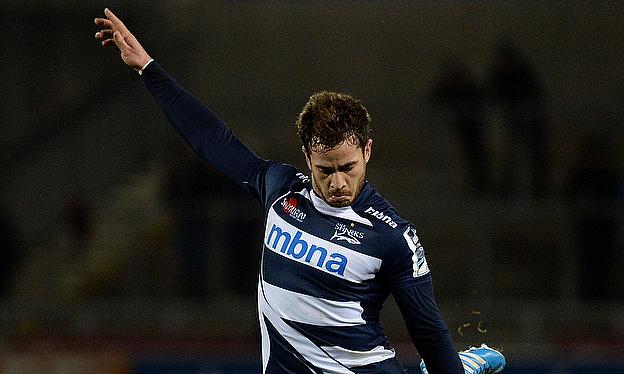 Round 11 marked the halfway point of the 2014/15 Aviva Premiership, but there no were signs of a midseason lull as teams up and down the country put on a number of highly entertaining fixtures during the festive period.

We dragged ourselves away from the Christmas specials and festive fare just long enough to take in the round and offer up our XV of the week, but do you agree with our selections?

The veteran prop turned back the years against Wasps, scrummaging with a tenacity that Gloucester have missed over the last couple of seasons. Wood helped Gloucester disrupt a Wasps scrum that has been very impressive thus far this season.

No hooker particularly excelled away from the set-piece this weekend, but Ghiraldini had the Leicester lineout running like a well-oiled machine against Sale, as did Wasps’ Ed Shervington and Bath’s Rob Webber.

It was another strong scrummaging performance from Thomas on Saturday, who continues to benefit from the tutelage of Neil Hatley (and David Wilson) at Bath. He didn’t take apart his opposite number at scrum time, but he consistently seemed to have the upper-hand against both Ben Moon and Carl Rimmer.

With Dylan Hartley suspended and Courtney Lawes missing through injury, Day rose to the occasion admirably, taking control of the Northampton lineout and ensuring it continued to function at a high level. With natural back rower Sam Dickinson alongside him in the engine room, Day did a great job of picking up the slack for the absent duo of Hartley and Lawes.

As ever, Parling was a vital cog in the Tigers’ well-functioning lineout, helping lay the foundation for Leicester to launch perhaps their most incisive-looking back line of the season so far. The lock also led the Tigers in tackles, with 14, and lineout takes, with five.

One of the major catalysts behind Leicester’s memorable comeback win against Sale, Gibson had one of his best games of the season in Salford, popping up all over the pitch. A yellow card in the first half marred his performance slightly, but without him, it’s unlikely Leicester would have been able to overcome the deficit they found themselves in after 55 minutes.

The Zimbabwean battled well with Francois Louw at the breakdown, but really stamped his authority on the game defensively, making two try-saving tackles that kept Exeter in the game. The flanker also contributed in the set-piece, having an important influence at the lineout.

The powerful back rower put in another impressive performance, running with confidence and dynamism through the Gloucester defence. Hughes was also extremely vocal, enthusing his teammates and taking a role in the on-field decision making, clearly establishing himself as a leader in Wasps’ pack.

Wasps did not enjoy territorial or possession advantages against Gloucester, but when they did have the ball, Simpson ensured they played with an unrelenting tempo and helped his side take the few opportunities that came their way.

This spot could easily have gone to George Ford, but Cipriani put on a show in Salford, elevating those around him as he led Sale to a commanding lead over Leicester. For years, Tom Brady of the New England Patriots has made the players around him look much better than they are and Cipriani is fast becoming rugby’s answer to the NFL’s golden boy.

Harris bagged a brace during Newcastle’s valiant but ultimately unsuccessful comeback against Saracens, including finishing off a delightful score for the Falcons, who evaded and offloaded their way 60 metres through Saracens’ sprawling defence.

A stellar display from Eastmond saw him both score and set up a try, as his elusive footwork and Rugby League-taught passing caused Exeter’s young pairing of Sam Hill and Henry Slade no end of problems. The inside centre played the role of a second playmaker outside of the also impressive Ford, helping spark an extremely impressive performance from the Bath back line.

Lowe shuffles out to outside centre due to the performance of Eastmond, but put in arguably his best performance since recovering from a serious neck injury. Despite enjoying the lion’s share of possession and territory, Quins found it hard to breach Northampton’s defensive line, but Lowe and Marland Yarde were notable exceptions

It’s Addison’s second appearance in this team in as many weeks, as the former centre continues to shine on the wing for Sale. Addison beat seven defenders on his way to racking up 114 metres with ball in hand and grabbing a well-deserved try against Leicester.

Time and time again, Watson scythed through Exeter’s defensive line, playing with a confidence and ambition that England can only hope lasts until the Six Nations. Watson’s acceleration coupled with his arcing runs had the Chiefs’ defence in disarray at times and ultimately paid off with the full-back crossing the try line late in the game, securing victory for Bath.