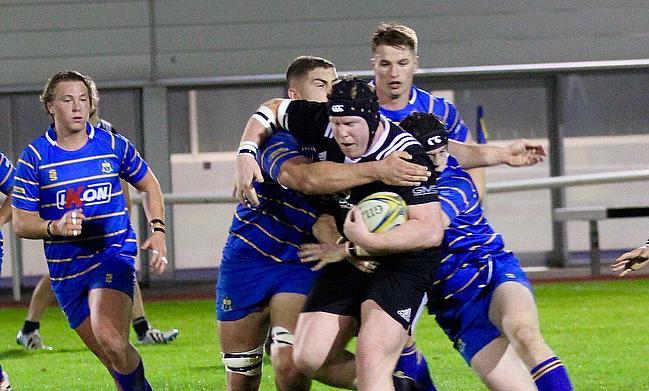 Northumbria battled back to remain on top
©BUCS

University Rugby is developing across the country with links to Premiership, Championship and National Leagues
Northumbria battle back to stay on top
Northumbria move to the summit after Hartpury stun Exeter
Cardiff Met suffer title blow at hands of Hartpury

Aedan Moloney inspired Northumbria University to a bonus-point victory as they came from behind to beat Nottingham Trent University in BUCS Super Rugby.

The winger scored twice to help ignite a fightback from Darren Fearn’s side who remain a point clear at the summit of this division.

Below is a round-up of all the BUCS Super Rugby results plus a review of the league and cup action.

The home side led 17-14 in the first half, but had to fight back in the final quarter to clinch victory in the West Country derby.

Exeter were awarded an early penalty try before Mike Haines, Simon Linsell (2) and Josh Pieterse went over for Keith Fleming’s side.

Austin Hay, Will Partington and Charlie Dunbar crossed for the visitors and they did go four points ahead following Will Flinn’s brilliant solo score with 20 minutes remaining, but Exeter were able to turn the game around at Sandy Park.

Loughborough University shook off the challenge of Durham University to claim victory in the Midlands.

The hosts started slowly, but reacted well as Joe Carolan and Callum Watson both scored to help Loughborough into a 14-5 lead at the break.

A third try early in the second half extended Loughborough’s advantage, but a second score of the evening for Durham kept them in the contest.

However, Loughborough were able to hold on to ensure the win which leaves them four points off fourth placed Leeds Beckett, but the Yorkshire side have two games in hand.

Hartpury bounced back from their defeat against Northumbria University by securing a hard-fought win over Nottingham Trent University in Gloucestershire.

Last week’s loss against Northumbria was Hartpury’s first of 2018, but the current BUCS champions responded well to clinch their sixth win of the campaign.

Their latest victory leaves them eight points off the top four in BUCS Super Rugby whilst Nottingham Trent began their double header for the week with a 12th defeat in a row.

Northumbria University fought back from 22-0 down against Nottingham Trent University to remain on top of the BUCS Super Rugby table.

Two tries from Aedan Moloney plus scores from Ed Bloodworth, Jake Ellwood and Ned Newman paved the way for the bonus point win.

Trent led 22-0 after 30 minutes following three tries, but despite a blistering start, Northumbria produced a storming response as they came from behind to clinch victory for the third consecutive week.

In our featured Men’s divisions, Durham 3rds are on the verge of clinching the North A title after a 33-12 win over Loughborough 2nds. The North East side have now completed their domestic fixtures for the season, but second placed Newcastle University sit nine points behind them with two games in hand.

With Hartpury 2nds’ match against Swansea University called off, Cardiff University were able to clinch the South A title after a commanding 24-0 win against the University of Bristol. Elsewhere in this division, USW beat UWE 46-24 and Exeter 2nds tasted derby delight after a 20-15 win over Bath 2nds.

In Northern 2B, there was only one game as the University of York beat Leeds Beckett 3rds 22-0 away from home whilst both Newcastle 3rds v Leeds 2nds and Northumbria 2nds against Sheffield 2nds were called off.

With league leaders Manchester 2nds not in action due to their postponed fixture with Chester, Edge Hill University were able to cut the gap at the top of Northern 3A to six points following their 26-13 win at Manchester 2nds. There were also two fixtures in Northern 3B which fell foul to the weather, but York St John University did claim the local bragging rights as they beat York 2nds 29-15.

In the Midlands division’s, the University of Warwick beat Nottingham Trent’s 2nds 21-16 to edge closer to the silver medal spot in Midlands 1A whilst there was joy for Harper Adams University in Midlands 2A as they clinched the title following a 24-0 win over second placed Nottingham 3rds. Elsewhere, Warwick enjoyed more success as their 2nd XV ran out 22-5 winners against Birmingham 3rds.

With the Women’s Championship quarter-finals now decided, Premier North champions the University of Edinburgh finished off their domestic season with 22-15 win away at Durham University. Also in this division, the University of Birmingham beat bottom of the table Newcastle University 22-17.

In the Men’s BUCS Trophy competition, all eight of the teams who advanced to the quarter-finals picked up home wins in the Round of 16.

St Mary’s are also through to the last eight after beating Cardiff 2nds 17-12 and fellow South B side Exeter 3rds will be their opponents in the next round after a comprehensive 47-0 triumph over Birmingham 2nds. Cardiff Met 2nds also advanced with a 36-15 win against the University of Gloucestershire.

There was also one result in the Northern Conference Cup as Manchester Met reached the semi-finals after 36-10 victory away at Newcastle 4ths.