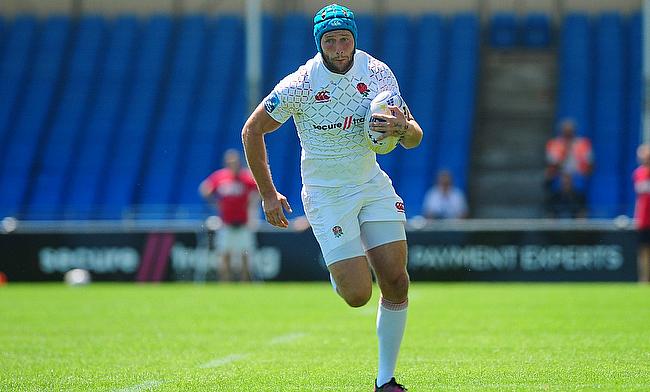 After a pre-season marred by injury, Simon Amor’s England side pulled off a feat that many would have thought impossible. A third-place finish in Dubai for the fourth year in a row sets the side up well for what will be a competitive competition in Cape Town this weekend.

Placed in an all European Pool C, with France, Scotland and Spain, England come into the second leg of the World Series as favourites to top their pool. A stark contrast to how the side entered the Dubai 7s nearly a week ago, England stalwart Rich De Carpentier says that he and his teammates quite like flying under the radar.

“I think the expectations for us were a bit low, but that’s kind of how we like it,” De Carpentier said.

“We had a bit of a tough pre-season with quite a few lads out with injury and just coming back. So, the amount of training that we actually did as a team in the off-season wasn’t as much as we have done in previous years.

“We’ve got a talented squad, but to get everyone back on the pitch playing was the best thing for us, and we just missed out in that semi-final. I think a couple of people were surprised, but they shouldn’t have been. The quality in the squad that we’ve got, if you look around it, we’ve got quite a few boys that have been around for a bit of time.”

An incredible achievement for @dbibby15 who makes his 50th @WorldRugby7s tournament appearance in the #Dubai7s tomorrow ?? pic.twitter.com/vXPL3soSYt

Falling 12-19 short of New Zealand in the semi-final, England proceeded to beat an extremely impressive Samoa side in the bronze final 19-17, with De Carpentier scoring a first half try that was converted by his Kirkham Grammar School alumni, Dan Bibby.

Making his World Series debut in 2011, De Carpentier is one of several vastly experienced players in this England side. Whilst the likes of the forward, as well as teammates Dan Norton, Tom Mitchell and Dan Bibby are familiar names, England have leant heavily on the young talent that they have been nurturing.

“Seeing the likes of Charlton Kerr and Ben Harris coming on at the weekend, I thought they were outstanding. Ben, who is only a young lad, coming through, being able to step up and perform on the World Series was really good for the programme and good for the lads because we’ve seen them grow quite a bit.”

The 2019/20 World Series comes with added meaning this year. With the 2020 Tokyo Olympics taking place  next summer, players representing the qualified nations know that a career defining event is at their fingertips.

De Carpentier was unfortunate to miss out in 2016 as Team GB gathered a silver medal in Rio de Janeiro. Now, nearly four years on, the former Leicester Tiger admits that every player on the Series has their sights fixed on Japan.

“Everyone has got eyes on Tokyo at the end of the season,” De Carpentier continued. “Seeing all the boys go to the Games after the last cycle was such an amazing experience, especially being so close to it with a couple of close friends going.

“Those boys are still in and around the squad, having learnt from those experiences. It’s a long season but we’ve got an eye on it and a lot of the things we’re doing in training is trying to grow towards peaking in Tokyo and hopefully getting on the plane.

“It is good for competition in the squad with the lads. Everyone is pushing for places, which drives us and I wouldn’t be surprised if the standard of training just keeps getting better and better as the year goes on.”

Captains all set for a big weekend at the #CapeTown7s

Tune in for unmissable #Rugby7s action on 13-15 December in the next round of the #HSBC7s series. pic.twitter.com/uRPADZlDtn

Playing their second leg of the World Series this weekend, England will be hoping to carry on where they left things in Dubai. With mixed performances in Cape Town after exploits in the opening leg of the series, the draw has seemingly been kind.

“We’ve got a little bit of history in Cape Town,” De Carpentier added. “All the boys love being here and we love playing here. After the World Cup Final and South Africa winning and then them winning in Dubai, it’s a tough place for English people at the moment!

“We are buzzing for the weekend, hoping to kick on and make an impression. We’ve got a pretty tasty group, kind of a European group with Scotland, Spain and France. France looked decent last weekend, Scotland always kick up a good game and Spain are not too bad either. We’ll just concentrate on winning those pool games first and see if we can do another job on the Sunday.”