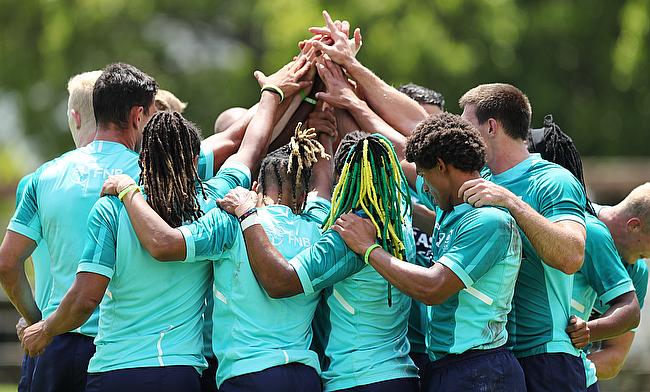 After a scintillating opening round in Dubai, the world’s best sevens players have now flown into Cape Town to play a second leg in two weeks.

It was South Africa’s men that stole the show in the desert in the men’s competition, whilst New Zealand overcame a stern Canadian test in the women’s tournament.

In Pool A, hosts South Africa have been drawn alongside last year’s livewires USA, Fiji and Japan. By far the most difficult pool to escape from in Cape Town, World Series commentator, Dallen Stanford, believes that his native South Africa and the country he represented, will have a battle on their hands to go further in the competition.

“The US were not able to have the impact they had last season without Ben Pinkelman, Martin Iosefo and playmaker/restart genius Folau Niau,” Stanford said. “The error count was extremely high for the Eagles and it now means they play in a pool of piranhas.

“Making it to the top eight will be extremely difficult, but it’s a long season and new players and combinations need to be tested over the next few months in preparation for Tokyo. Medalling at the Olympic Games is far more important for the growth of rugby in America than placing well on the current HSBC Sevens World Series.”

England began the @WorldRugby7s series with a bronze medal in Dubai and Rich De Carpentier admits even at this early stage of the season, eyes are already on the Olympic Games.

South Africa were slow burners in Dubai, having to beat good England and Samoa teams on their road to the final. With Werner Kok and Afrika, two former World Sevens Players of the year, South Africa’s depth helped them win the tournament.

“They did start very slowly and almost lost to Kenya and had to recover against England after trailing 14-0 at halftime,” said Stanford. “It seemed that some of the Blitzboks tried to force things, which led to several uncharacteristic errors from the squad.

“But, at the business end of the competition, they carved a quality Samoan outfit and did not concede a single point against New Zealand. Coach Neil Powell has a brilliantly balanced team. Strong imposing forwards, creative halfbacks who are more elusive than Big Foot and speedsters that will burn you.”

England’s draw has been fairly kind too. In an all European pool with France, Spain and Scotland, much like New Zealand in Pool B, it seems like Simon Amor’s are favourites to exit the group as leaders. t is in Pool D where the surprises of Dubai find themselves.

It is in Pool D where the surprises of Dubai find themselves. Samoa, who were highly motivated by the outbreak of measles in the country, fell two points short to England in the Bronze final and now find themselves at the head of their pool in Cape Town. Alongside Australia, Ireland and Kenya, who all had strong performances in the Middle East, Samoa will no doubt be hoping to have another dominant display this weekend.

“It was fantastic to see them in the top four,” Stanford said. “It was a very emotional time for them with the measles epidemic claiming so many lives, and it has personally affected a few members of the squad. I also loved seeing Ireland win one of the most exciting matches from that weekend when they scored at the death to beat Scotland 31-29.”

After their last-gasp victory over Canada in the Cup final, New Zealand top Pool A, with Russia, Fiji and South Africa seeded below them. The Kiwi’s have always been a dominant force on the Series and will face a tough test from Russia in particular but will certainly fancy their chances to progress in this tournament.

In Pool B, the Canadians take top seed in a group which contains France, Spain and Brazil. Canada placed second in Dubai after a finishing in sixth position in Glendale earlier this season and will hope that they don’t hit those lows again.

The USA backed up their Series leg win on home soil with another good performance last weekend. Placing third on this occasion, the side find themselves drawn with Australia, England and Ireland in South Africa.