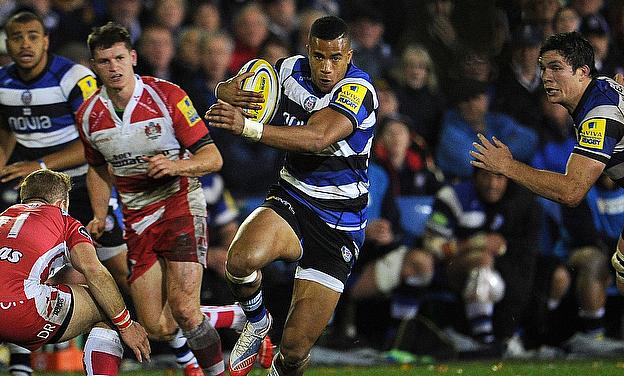 Bath head coach Mike Ford declared Anthony Watson is ready to solve England's wing crisis for the RBS 6 Nations after excelling in the 27-27 draw with Leicester.

Watson, 19, scored Bath's opening try and was lively throughout an entertaining Aviva Premiership clash at Welford Road that finished all square after flanker Jamie Gibson crossed in the 79th minute.

England have lost Christian Wade and Marland Yarde to injury for the entire Six Nations and Watson, who was moved from full-back to the right wing against the Tigers, is in the running to make his debut against France on February 1.

"If Anthony Watson didn't get man of the match, I don't know who did. He was fantastic, on fire," said Ford. The award in fact went to Gibson.

Ford revealed England head coach Stuart Lancaster is visiting Bath on Monday and said: "Stuart has talked to me about (Watson) playing wing and that was the best he's played all year, without a question.

"It was against a serious side away from home, so that's very promising.

"An international wing finishes those chances and he did that. On that performance he's ready to play for England.

"His main attribute is attitude. He'll keep his feet on the ground and will try to get better."

England update their elite player and Saxons squads on Thursday, with George Ford in contention for promotion to the senior group in place of Toby Flood, who is destined to play in France next season.

Ford was involved in most of his team's best moments at Welford Road, creating tries for Francois Louw and Jonathan Joseph and kicking 12 points.

"For me if they don't pick Toby Flood then George Ford must be one of the front-runners," Mike Ford said.

Third-place Bath led 27-17 heading into the final quarter, only for Leicester to hit back through Gibson in the dying moments. Fly-half Owen Williams then missed the match-winning conversion.

"That feels like bit of a loss, which is good because it shows how far we've come," Mike Ford said.

"We're still third in the table, we have 10 games left with six of them at home. We're in a strong position, but we still have to prove it.

"If we have to come back here in the play-offs, then we won't be afraid."

Champions Leicester remain in fifth place and director of rugby Richard Cockerill was pleased with the Tigers' fightback.

"To battle back after trailing like we did and to be in with a shout of winning it at the last play is credit to the players," Cockerill said.

"We're still fifth with 10 games to go so it's not the end of the world. We have a long list of very good players to come back. We're not in a bad place.

"The game lasts for 80 minutes, not 79 minutes, and we just had to keep on going to see where we got to."