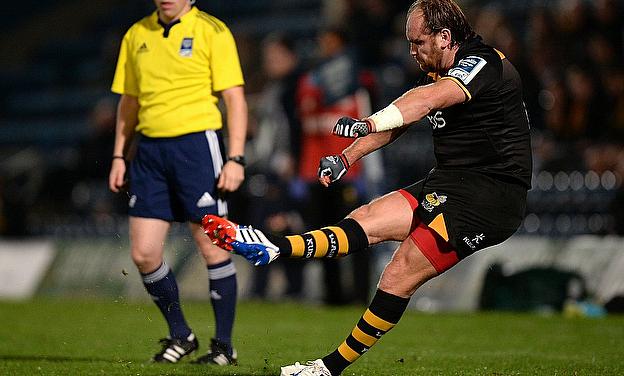 Joe Simpson had twice saved Wasps from a third-straight home defeat when he raced in for a try before denying Exeter fly-half Henry Slade a winning score.

Northampton denied Wasps at the last with 17-15 victory at Adams Park on December 21.

Goode ensured there would no repeat, after Simpson and Exeter's Dave Lewis had traded tries.

That was when the Chiefs had the wind advantage, though.

Exeter blasted out of the blocks thanks to a solid line-out platform and Lewis' quick thinking.

The alert scrum-half raced clean through to register the game's first try just two minutes in, punishing Wasps' sloppiness in not posting the ruck.

The former England winger could not quite tiptoe the right side of the touchline, so despite collecting and dotting down there was to be no try.

No sooner had Exeter cleared their lines than Wasps blasted them off a ruck to claim a kickable penalty.

Long-range specialist Daly stepped up, and potted the hosts onto the scoreboard.

Slade slotted a penalty of his own with little delay to restore Exeter's seven-point cushion.

Wasps were straight back on the attack, only for Goode's cute grubber to come up short, allowing Exeter easy relief.

Varndell cut in behind Exeter again, only for Nowell to haul him down just metres shy of the whitewash.

Exeter rebuffed a pile-drive short carry from Ashley Johnson, forcing first a Wasps knock on then a penalty from the five-metre scrum.

Full-back Daly then coughed up a high ball under scant pressure, and Exeter drove Wasps into conceding a penalty at the scrum.

Slade slotted the easy points to extend the Chiefs' lead to 13-3 just past the half hour.

Prolific goal-kicker Goode had an immediate penalty chance to slim Wasps' deficit, but the former Leicester and England outside-half failed to convert.

His wayward work with the boot continued when he gifted possession to Exeter with another ill-judged grubber.

Daly then misjudged Tom James' high ball, with the bounce allowing James to force him into conceding a five-metre scrum to the Chiefs.

Exeter's promising number eight Dave Ewers had to break under pressure, and Wasps dominated the tackle area again to force a vital turnover.

Tui's injury only added to Exeter's front-row concerns, with experienced loosehead Brett Sturgess already confirmed as out for the season.

Promising youngster Alex Brown slotted into place, as the game edged to half-time with Exeter still 13-3 to the good.

James then dropped a regulation high ball as Exeter handed Wasps an ideal platform to start the second half but Charlie Hayter could not hold Goode's inside ball after Will Helu's neat break.

Wasps did win a scrum penalty though, and Goode duly converted and they should have scored their first try from Hayter's midfield charge but Goode could not find Helu cleanly, forced to settle instead for his second penalty in three minutes.

Finally the hosts had their try, though, with Simpson mimicking Lewis' first-half score for Exeter, sneaking round a ruck to race home unimpeded.

Wasps had the lead for the first time, which Goode's conversion extended to three points.

Exeter pressed again, stealing the ball after forcing knock on.

Slade raced clear, only for Simpson to deny him a try by twisting him off the ground, television match official Graham Hughes making the call.

Exeter sustained the attack with a five-metre scrum, but could not find a way through.

Slade did slot a penalty to level the scores at 16-16 however.

Not to be denied, Wasps hit back, set a platform in the Exeter half, and Goode delivered.

After the game the match-winner paid tribute to Wasps boss Dai Young, admitting he had a "stinker" for all but the final act of his side's 19-16 victory.

The former Leicester and England stand-off conceded he would have substituted himself at half-time for his dismal display, when Wasps trailed 13-3, and hailed rugby director Young's trust to keep him on the field.

"I was surprised as well," admitted Goode at Young's decision not to replace him despite a string of tactical kicking errors.

"Dai gives players a lot of confidence, he backs them, he's as honest as the day is long.

"Luckily he's got faith in me, I would have taken myself off at half-time but there we go!"

Admitting he was fortunate to stay the contest's course, Goode said: "I took my time over that drop-goal, I couldn't have hit it any better to be honest.

"You know when you hit them if it holds the line it's going over, and lucky enough it did because I was pretty terrible for the rest of the game.

"I didn't need to listen to the crowd to know how badly I was playing in that first half, actually for 79 minutes.

"I changed my boots at half-time, which probably helped psychologically.

"I'll go to bed tonight remembering how badly I played, and that I was lucky to get away with it at the end there."

Relieved he kept faith with Goode after toying with hauling him off at the interval, Young said: "It was probably the right decision in the end wasn't it.

"It was certainly something we thought about, by his own admission he's had a lot better games.

"It was a measure of the guy, it wasn't an easy drop-goal, to nail that and the penalties in the second half, those were probably his saving grace and what kept him on the field.

"He's got excellent strength of character.

"I expected a response second half, so to win that 16-3 was a big turnaround because in the first half we were extremely poor.

"It was good stuff by Joe (Simpson) to get back and save that try, and we all know how sharp he is off the base of the scrum for the one he scored too."

Hailing Slade's full Premiership debut, Baxter also said tighthead prop Hoani Tui will have scans on his neck after being carried off by stretcher in the first half.

"I'm going to need to see what was reviewed again," said Baxter.

"The quality of what's shown on the big screen is not the same as what the TMO sees.

"I think it was important Sladey got the full 80 minutes on his full debut.

"In hindsight we'll look back on a missed opportunity.

"But it was always going to be a game full of momentum shifts, and those are the games it's important for him to experience.

"So that's why we left him out there, and I think he came through it really well."

"He complained of neck pain, soreness and swelling around that area," said Baxter. "And after a series of scrums you've got to take every precaution.

"Until we've had some good scans on him it's a little early to tell.

"We've got options, so my inclination at this moment is we'll use everyone we've got, and I haven't got a problem with that.

"I'm certainly not going to be in the market tomorrow for an international tighthead."