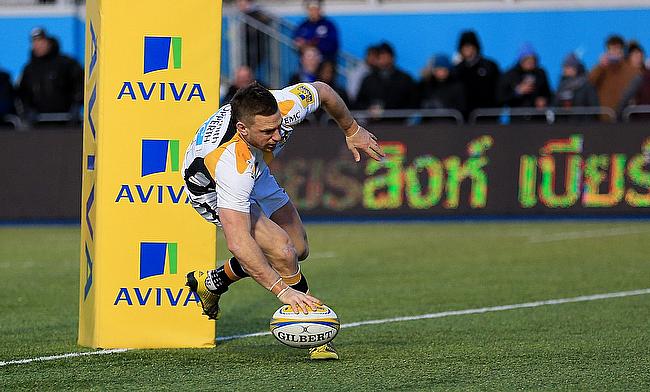 Wasps secured a crucial benchmark in the hunt for this season's play-offs as an eight-try, 64-23 triumph over league leaders Saracens at Allianz Park moved them into the top-four in emphatic fashion on Sunday.

The visitors were ruthless in the game's opening 10 minutes in which they raced out a 19-0 lead, and such was their dominance that they had the four-try bonus point wrapped up midway through the first half.

It is the first time since the 2012/13 season that Wasps have fourth consecutive league games.

With Billy Vunipola impressing during the early stages of the Six Nations, Wasps' Fijian No.8 Nathan Hughes - who qualifies for England on June 27 - may well have given Eddie Jones some long-term food for thought as he played the role of Sarries' tormentor-in-chief.

Brad Barritt and Jim Hamilton provided some resistance for the home side, but Saracens were largely underwhelming and deservedly slipped to just a second loss of the season.

Wasps took the lead in the third minute when Piutau capitalised on the overlap to score in the corner and although Gopperth dragged the conversion wide he made no mistake in slotting the extras when Young went in under the posts following Josh Bassett's offload only two minutes late.

And incredibly, the visitors stunned the shell-shocked hosts for a third time on eight minutes when George Smith broke the line and found scrum-half Robson on his shoulder allowing the latter to dot down.

Charlie Hodgson temporarily halted the onslaught with a 12th-minute penalty and Sarries further reduced the arrears in the 23rd minute as Barritt joined the back of a driving maul to burrow his way over the line.

But Wasps - who could muster only three penalties against Newcastle Falcons a week ago - re-established their control as they secured a four-try bonus point on 28 minutes - Hughes crashing through three defenders and over the line from five metres out.

Two further penalties from former England international Hodgson before half-time kept Saracens above water for a time but between Hodgson's strikes came a fifth Wasps try and a second for Hughes.

The No.8 rode a couple of tackles over the line r and Gopperth hammered his third conversion to make it 31-16 at the interval.

Saracens had overcome half-time deficits in their two previous matches against Bath and Exeter but any dreams of a miraculous turnaround were soon quelled after the break as Gopperth shrugged off a tackle and jinked his way through the defence for try number six.

With Sarries lock Alistair Hargreaves in the sin-bin, the Wasps fly-half added a further penalty to take the score to 41-16 before Piutau cut a beautiful line to collect Smith's pass and touch down under the posts to compound the hosts' misery.

Although mammoth second-rower Jim Hamilton snuck over the line with a pick-and-drive on 55 minutes for the hosts, Hughes made his presence felt once again with a rampaging run forwards before a sublime offload to Robson saw the scrum-half score his second try before Elliot Daly booted a 57-metre penalty and Alex Lozowski - bound for Saracens at the end of the season - also notched a three-pointer to complete the rout.