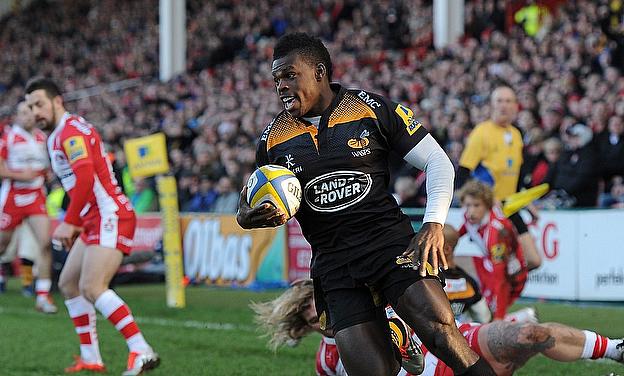 Wasps' recent improvement continued with a win over Gloucester while there were also post-Christmas Aviva Premiership wins for London Irish, Bath, Leicester, Saracens and Northampton.

At Kingsholm, Wasps led 24-14 at the break but had to fight off a Gloucester fightback to prevail 30-23.

Jonny May and Matt Kvesic dotted down for the hosts with Greig Laidlaw converting both scores and adding a penalty.

In front of a packed house at Twickenham, Harlequins failed to turn 75 per cent of possession into victory as they went down 30-25 to Northampton.

82,000 watched as tries from Samu Manoa, George North and Kahn Fotuali'i were enough for Northampton, along with three penalties and three conversions from Stephen Myler.

George Ford converted all four scores and added a penalty while Matt Jess and Jack Nowell crossed for the visitors.

Leicester came from 30-15 behind to beat Sale 32-30 after a comeback at the AJ Bell Stadium.

Chris Cusiter, Will Addison, Nathan Hines and Sam Tuitupou all crossed for Sale as they took advantage of poor Leicester defending.

However, the Tigers recovered their composure and snatched a late win thanks to tries from Miles Benjamin and Julian Salvi as well as an Owen Williams penalty.

Seremaia Bai and Mathew Tait had crossed for Leicester in the first half.

Saracens handed Newcastle their second defeat of the festive period by winning at Kingston Park 25-23.

Both sides scored three tries - Sinoti Sinoti with one and Chris Harris with a brace for the home side and Neil de Kock, Nick Tompkins and Chris Ashton for the Saracens - but the boot of Owen Farrell, who converted two scores and added a brace of penalties proved the difference.

Alex Lewington scored the only try of the first half before further London Irish scores followed in the second period from Geoff Cross and Tom Court.

Tom Homer converted all three and added a penalty and all that struggling Welsh could muster in reply were three Will Robinson penalties.