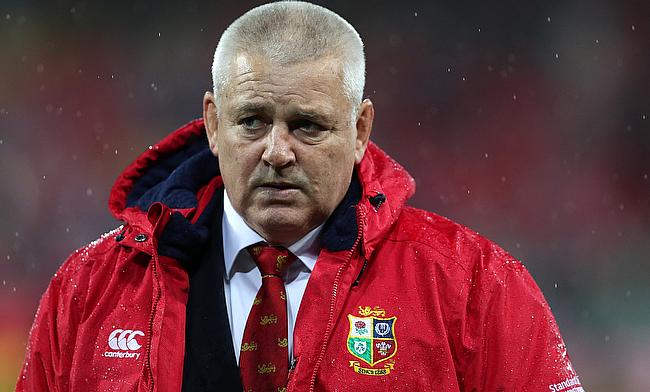 British and Irish Lions head coach Warren Gatland has unveiled a 37-man squad for the upcoming tour of South Africa.

Wales skipper Alun Wyn Jones has been named the captain and it will be the fourth time the 35-year-old will be part of the Lions squad after 2009, 2013 and 2017 tours. Jones, who is also the most capped player in international rugby recently guided Wales to a Six Nations title earlier in the year and has overcome competition from Maro Itoje, Owen Farrell and Stuart Hogg.

Jones will also be reuniting with Gatland after the duo were part of Wales' World Cup campaign in 2019 following which the 57-year-old stepped down from the role to join Super Rugby side Chiefs.

"I'm obviously very proud and privileged," Jones said. "To be selected in the squad is initially what you want to be hearing as a player. To have the armband as well is a privilege.

"I had a call from Gats on Sunday evening -- actually a missed call because I was doing something at the back of the house. I thought I'd better give him a call back and I sort of knew what it was about. We had a quick chat and I accepted obviously.

"Initially the draw is to get into the squad. I've just got a huge amount of pride to be able to add this to the CV."

There was no place for England duo Jonny May and Henry Slade or Manu Tuilagi but Courtney Lawes, who is on the sidelines since February makes the cut along with Jonny Hill.

Mako Vunipola, Wales' Wyn Jones and Scotland's Rory Sutherland have taken the loosehead spots with England duo Jamie George and Luke Cowan-Dickie being the preferred hookers alongside Ken Owens. Tadhg Furlong and Andrew Porter and Zander Fagerson will be competing at the tighthead.

"Selecting a Lions squad is never easy and, in many ways, this has been the most challenging selection I have been involved in. Over the course of the last three weeks the coaches and I have rigorously debated each position. We saw some outstanding performances in the recent Six Nations, so competition for places has been tough with some incredibly tight calls to make.

"However, we are very happy with the squad we have assembled and look forward to meeting up in Jersey in just over a month’s time to start our preparation to take on the World Champions. We've left out some very talented players which gives an indication to the strength of this squad and we know how important that stand-by list will be.

"Being selected for a Lions Tour is the greatest honour for a British and Irish player and I congratulate everyone named today."

The Lions will face Japan in a warm-up game at Murrayfield Stadium on 26th June before and will take on the Springboks in a three-Test series between 24th July and 7th August with FNB Stadium, Cape Town Stadium and Emirates Airline Park being the venues.