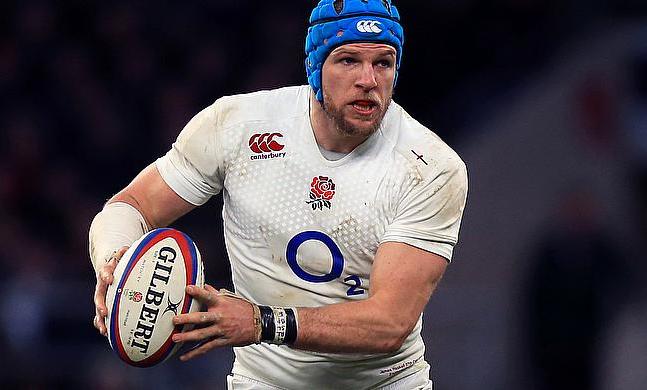 The last time I interviewed James Haskell, we were both sat in the changing rooms at Northampton Old Scouts RFC.

It was part of a Gallagher Premiership campaign and I travelled down to the club after a day sat in university lectures learning about the career ahead of me. The conversation that followed was all about England’s upcoming trip to Cardiff and how he was enjoying his time with Northampton.

But whilst Wales beat Eddie Jones' side on their way to a Six Nations Grand Slam and the flanker’s time with the Saints was short-lived, what remains is the 36-year-old’s list of achievements.

With Wasps, Haskell won a Champions Cup and a Premiership title whilst also playing in New Zealand, Japan and France. Internationally, he represented England on over 70 occasions and he also went on a British and Irish Lions tour in 2017.

Since retirement, Haskell has become a trustee for the Rugby Players Association's charity, Restart, and he spoke to TRU about the Restart Round which is taking place this weekend in the Premiership.

The charity's campaign is between the 3rd – 16th May and they are hoping to raise funds for their efforts, with Haskell more than happy to throw his full support behind Restart.

Restart Round is nearly here ????
Round 18 in the #GallagherPrem is dedicated to @restartrugby and supporting players’ mental health.

Special thanks to our ambassadors for their work raising awareness??

“When I was a player, I always supported Restart, but I wasn’t exactly sure what they did,” Haskell said. “I thought they helped people restart their careers and obviously help people struggling with injury, but I wasn’t au fait.

“I didn’t ever have a catastrophic injury and it was something that if people asked me to support, I would do it. Then when I got involved with it, I discovered they were helping 50 to 60 players per season with mental health and it had stopped a few of them from taking their own lives.

“I was blown away by it, but I was so shocked by the fact that they got absolutely no funding from the RFU, no funding from the clubs, yet they were spending, on the mental health side of things, 70 grand a year on this anonymous helpline that players were utilising and I was very shocked so I thought I would go into bat for these guys.”

The mental obstacles that players have to overcome have perhaps never been clearer. One in six people experience a common mental health problem, with statistics suggesting that in a squad of 15 rugby players, more than nine will experience a mental health issue within two years of retiring.

Haskell has previously spoken about how the news of Kearnan Myall’s mental health struggles, as well as Alex Rieder’s battle with a painkiller addiction, hit him hard as a leader after playing with the pair at various stages during his career.

More recently, rugby union and other sports aligned themselves to take part in a social media boycott in an attempt to tackle abuse and discrimination, but for Haskell, the silent protest was but a drop in the ocean.

“Coming off social media, it is a nice stand, but it makes no difference,” Haskell said. “Until people are no longer allowed to be anonymous online and on social media, you are never going to change anything until these companies start making people accountable.

“I’m not sure which celebrity came up with this analogy of letting people into your house, but if you are letting people into your house, most people will be respectful and nice. If you don’t have it nicely decorated or if they don’t like things about it, they wouldn’t say anything. Social media is like that, but unfortunately, people come in, disagree, shout, threaten, are rude and then tell you they are leaving even though they had come round.

“It is madness really and stupid people don’t know they are stupid. That is the worst part about it. Go to a well-known newspaper’s website, look at the comments section and all the people ganging together, abusing everybody, thinking they are part of some club and they don’t realise they are the scum of the earth.

“They go to bed not knowing because of the way the human brain tricks you into thinking you are normal. Social media is good for business, education and bringing some people closer. If it is not (for an individual), get off it because it is a load of s**t and it will just make you unhappy, miserable and cause you mental health issues I would imagine.”

In addition to social media, Covid-19 has of course changed the shape of the world. The pandemic has also had a significant impact on elite sport with athletes having to spend extended periods of time away from their families and loved ones in bio-secure team 'bubbles.'

With a British and Irish Lions tour to South Africa coming up, it seems as though 'bubble life' - and the challenges which come with it - will be a conversation that will be focused on during the summer.

With the Lions squad set to be confined to their hotel for the duration of their time in the Southern Hemisphere, the question is already being asked whether players will pull out of the tour and give up what could be a once in a lifetime opportunity.

Ben Youngs has made himself ineligible for personal reasons whilst Joe Marler didn't play in this year's Six Nations in order to be with his family. With that in mind, it is a very real possibility that some of Warren Gatland’s first choices may not want to represent the Lions.

“Ben Youngs has pulled out already, hasn’t he?” Haskell said. “He has written that he does not want to be involved and taken out, so it has already happened with him. This is not going to be a Lions tour like what has ever happened before. It is not going to be the super special occasion that everybody loves it to be.

“I do think the Lions is going to be very hard and I think it is going to be difficult. They are in Johannesburg, which is not a place well known for the ability to go out and overly indulge, so I think you are going to get a few more people (turning down the opportunity).

“But I would personally never ever, ever, ever turn down that opportunity. I am not built to do that, but Ben Youngs has already done it.”

On TRU this week, myself, Chris Heal and Gary Heatly have put forward our Lions selections for judgement from the masses so it felt pertinent to ask a former tourist who he thought was worthy of selection. The 36-year-old was quick to point out that any sort of suggestions generally do not serve players well as they strive to become part of one of rugby's most exclusive squads.

"I have many well-documented thoughts because The Good, The Bad, The Rugby have forced me to pick a squad of players," Haskell said. "I don’t really like doing this, fans love it, people who like podcasts like it. I didn’t like it as a player reading about it. That so and so was on the plane and my Dad once called me up and said Stephen Jones had me on the plane and that so and so didn’t even have me in the squad.

"As a player, you don’t need that and I am sort of just pandering to people, so I have picked who I believe should go, but luckily Warren Gatland has not asked me in any shape or form to pick the squad."

In order to support the Restart Round, please click here.