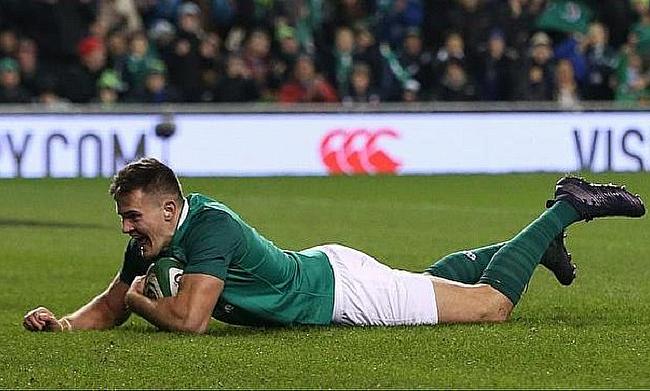 Ireland, after their humbling defeat to the hands of England, got back to winning ways at the Principality Stadium in Cardiff. This loss would be Warren Gatland’s final home game in charge of Wales and it took place the day before the New Zealander announced his World Cup squad. Joe Schmidt, similarly, announced his squad at midday on Monday.

Ireland took the lead early on, Jack Carty striking a penalty sweetly between the sticks, but it was cancelled out by Jarrod Evans’ own three pointer. Several minutes later, the game really sprung into life.

Fringe wing Andrew Conway scythed through the Welsh defensive line before passing the ball to Jacob Stockdale. Much maligned for his performance against England last week, Stockdale made no mistakes, diving over to register his try and Carty converted.

Just over 10 minutes later, Stockdale was at it again. Aaron Shingler chose to loosely offload the ball in the general direction of another player in red and the Ulster wing pounced. Kicking the ball beyond the quickly retreating Welsh defenders, Stockdale pushed his side even further ahead. Carty was unable to convert on this occasion, however, the Ireland lead was already dominant.

The step from Kilcoyne. ??

The footwork from Conway. ??

The finish from Stockdale. ????‍?? pic.twitter.com/yC1AkQ9Wz6

Not much else occurred in the first half and Ireland went into the break with a 15-3 lead. Warren Gatland proceeded to bring on Rhys Patchell and Rob Evans giving the Scarlets duo the opportunity to make their final bid for a place on the plane to Japan.

On 51 minutes, Leon Brown was sinbinned for repeated scrum penalties, although there is still some contention over who was really at fault. With a man advantage at the scrum, Ireland went on to choose the set-piece time after time, eventually earning a penalty try.

Seconds after Brown re-joined the field, Wales finally did something of note in this clash. Deep in the Irish 22, Owen Lane received the ball, stepped several of the onrushing defenders and dropped over the line with a green jersey draped across his back. Rhys Patchell added the extra points and the game was back on.

It was Patchell that drew Wales into the match further. Wales got through the phases, nearly driving the ball over. Eventually the ball ended up in Patchell’s hands for the Scarlets man to score and convert his own try. There would be no more scores, with Ireland winning 22-17, despite having a much more subdued second half against a Rhys Patchell inspired Wales.

It was last chance saloon for so many of these Wales players on Saturday afternoon. Now that the Welsh World Cup squad has been announced, it is obvious that some players’ performances on Saturday played a part in Warren Gatland’s thinking.

Perhaps the most noticeable exclusions were that of Rob Evans and Samson Lee. Evans in particular is a surprising omission. One of the more consistent selection choices by Warren Gatland at loosehead, Evans has been pipped by the Ospreys’ Nicky Smith, with Saracens’ Rhys Carre preferred as the backup, along with Cardiff’s Wyn Jones.

There are two tightheads in the squad, Tomas Francis and Dillon Lewis, and they will play the lion share of Wales’ games, with Francis being the preferred option in the three shirt. The exclusion of Samson Lee has raised eyebrows largely because he has been a favourite of Gatland for some time, although the club-form of Francis and Lewis was far superior to that of Lee last season.

Rhys Patchell’s brilliant second half display meant that Jarrod Evans missed out as the second choice flyhalf. Patchell, who can also play fullback, hasn’t been in the reckoning too much recently, but his dominant performance against Ireland was so impressive, it would have made Gatland’s decision much easier.

Shaun Edwards will feel as though there is still work to do in defence. Whilst Wales weren’t playing a full-strength side, the defence seemed very passive at times and seemed unable to take down Andrew Conway in the leadup to Jacob Stockdale’s first try. For the second, there was very little that could be done and the same could be said for the third too. Regardless, it wasn’t what you expect from the number one team in the world.

The biggest plus for Ireland is that they have got Jacob Stockdale firing again. Many will attribute his apparent return to form thanks to his recent haircut, however, it is more likely that he felt that he had to do better after a poor showing at Twickenham the week before.

Stockdale was selected by Joe Schmidt, but surprisingly his back three partner, Will Addison was not. The former Sale Sharks man produced a good performance at the Principality, but it was not rewarded with a place on the plane due to Conway’s good form over the summer period, as well as injury concerns that Addison has faced throughout the season.

Joe Schmidt on the Ireland #RWC2019 Squad and the tough calls the coaches had to make.https://t.co/Poo8absd58

Devin Toner also missed out on World Cup selection. Coming off the bench in Cardiff, it did seem unimaginable that the Leinsterman was not on his way to another World Cup. However, by Monday he wasn’t. Possibly not selected for his lack of versatility, Toner should feel hard done by as his ability at the lineout is unparalleled and although Leo Cullen will be happy to have the 33-year-old with him all season, Toner has just got better and better since the last World Cup.

When the Irish beat the All Blacks in the Autumn, it was Kieran Marmion at the heart of it all. Starting that fixture due to the ongoing injuries of Conor Murray, Marmion was magnificent in that fixture and seemed like the perfect back-up for Murray come game-time in Japan. Inexplicably, Marmion has not made the World Cup squad with young Leinster nine Luke McGrath preferred. Startling.

Admittedly, it wasn’t the best ever game on Saturday and Ireland were quite simply the better side, but this was a display of courage from Joe Schmidt’s team after a pretty damning defeat at Twickenham just seven days prior.