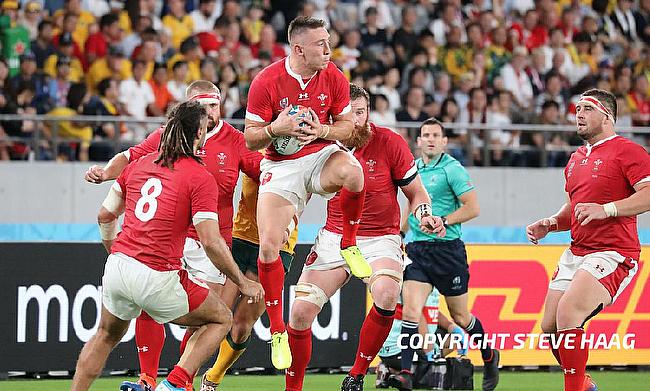 Wales confirmed their place in the Rugby World Cup quarter-finals after defeating Fiji 29-17 in a thrilling Pool D contest. Chris Heal delivers his verdict from a pulsating match in Oita.

We witnessed another version of Wales at this Rugby World Cup. In their opener against Georgia, their ability shone through whilst their character and mentality was on display when they defeated Australia 10 days ago.

And in Oita, Wales were far from their best, but they showed their battling qualities to eventually see off Fiji.

John McKee’s side flew out of the blocks to punish a lacklustre start by Wales and they caused the Six Nations champions problems all evening, but Warren Gatland’s side were able to get the job done to book their place in the quarter-finals.

A 29-17 bonus-point win was enough to all but guarantee Wales top spot in Pool D and by the time they conclude the group stages against Uruguay on Sunday, they will know whether it will be England or France in the last eight.

Their grip on Pool D was under threat after a flying start by Fiji. Wales’ 10-day break didn’t work in their favour to begin with as rather than looking revitalised and sharp, they were sluggish in their decision making and Fiji were quick to capitalise.

Shaun Edwards called for an 80-minute performance in defence from Wales, but it took just three minutes for their backline to be breached as Fiji’s Josh Tuisova blasted through Josh Adams, Dan Biggar and Josh Navidi to touchdown in the corner against all the odds.

What a finish from Tuisova ????

The Fiji wing batters through Biggar, Adams and Navidi to touch the ball down and give Fiji an early lead in Oita ??#WALvFIJ #RWC2019 #ITVRugby pic.twitter.com/npYmgyUVpq

Fiji’s fast start was reminiscent of how they began their opener against Australia in Sapporo and a disallowed Frank Lomani try briefly halted John McKee’s side from deservedly doubling their tally.

Ken Owens was only shown a yellow-card for a dangerous tackle on Viliame Mata in the build-up and it got worse for Wales shortly after when Kini Murimurivalu bounded over following a surging run by the impressive Semi Radradra.

Adams, again, couldn’t halt the Fijians out wide but the winger dusted himself down and responded to help Wales turn the game around before half-time.

Fiji had not put a foot wrong in the opening 15 minutes, but Tevita Cavubati’s dangerous shoulder charge at the clear-out saw Jérôme Garcès brandish a yellow card to the lock. It was unnecessary from the Harlequins man and after their discipline had cost them against Australia, Wales would also punish Fiji.

Dan Biggar was the conductor as his beautiful cross-field kick found Adams who composed himself to gather superbly against Ben Volavola to dot down.

Wales began to turn the screw in this gripping encounter and as Fiji were being pinned pack in their own 22, their penalty count grew which saw Semi Kunatani yellow-carded. At scrum-time, Wales set their platform and after Adams was halted brilliantly by Lomani on two occasions, it was third time lucky for the Cardiff Blues man who dived over in the left corner.

It was a simple move through the hands by Wales, but they were quickly back on defensive duties and only a forward pass denied Mata a score out wide before the break.

After beginning the first half slowly, Wales did the same after the interval as Fiji continued to cause Warren Gatland’s side problems. The Pacific Islanders thought they were in again through the brilliant Radarda, but another forward pass, this time from Murimurivalu, let Wales off the hook.

?????????????? @WelshRugbyUnion have qualified for the #RWC2019 quarter-finals, but coach Warren Gatland is not looking past the final Pool D match against @RugbyUruguay ??#WALvFIJ #RWCOita pic.twitter.com/DqA8ArqWF1

Fiji continued to press and it was Wales’ turn to be ill-disciplined as James Davies was shown a yellow-card for being offside. Moments later, Fiji took the lead thanks to a penalty try and it was no less than John McKee’s side deserved.

It got worse for Wales when Liam Williams and Biggar collided when jumping for a high ball and the fly-half had to be substituted for Rhys Patchell after his head crashed against the turf.

As he did against Australia, Patchell was able to add to Wales’ tally from the tee as a penalty levelled the contest at 17-17 before Gatland’s side sparked their attacking powers back into life to edge ahead.

Jonathan Davies superbly fended off Fiji's Jale Vatubua before producing a stunning offload to Adams who finished brilliantly in the corner to claim his hat-trick. The only negative was Davies picked up an injury and had to be replaced after his efforts.

With a five point margin, Fiji never gave up and mounted pressure on Wales with Radradra looking deadly everytime he was in possession. However, there was to be a huge sigh of relief from the thousands of Wales supporters inside the Oita Stadium when Liam Williams darted over for the bonus-point score.

Owen Watkins and Ross Moriarty made initial breaks before Gareth Davies flicked the ball to Williams who sprinted away from the tiring Fiji defence.

Wales were able to see out the rest of the game as the Six Nations champions booked their place in the quarter-finals. They were given a huge test by Fiji, which may have come at cost with the injuries to Biggar and Davies, but in the end, it was a bonus-point win which tightens Wales' vice-like grip on Pool D.