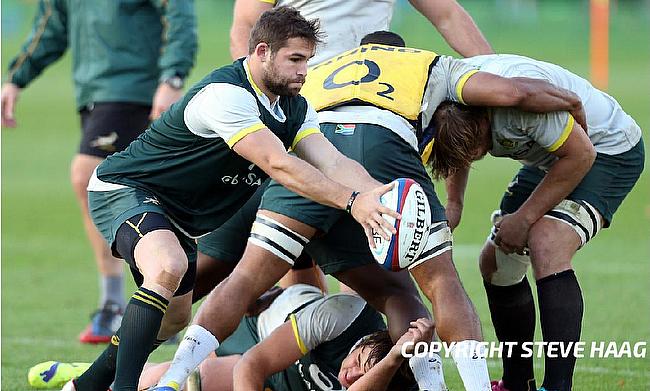 South Africa scored 10 tries as they thrashed Canada 66-7 in Kobe to confirm their place in the World Cup quarter-finals. Joe Harvey delivers his verdict.

South Africa look to have secured a second place finish in Pool B with a dominant victory over Canada in Kobe.

Northampton Saints’ Cobus Reinach ran the show in the first half, recording an opening half hat-trick to help clinch all the points for the Boks before the first half was close to its conclusion.

In the first half, South Africa were dominant throughout. After just two minutes, Damian de Allende crossed the try-line to register the opening score. Starting from an energetic RG Snyman burst, Elton Jantjies converted to keep the scoreline ticking over.

Just a couple of minutes later, South Africa increased their lead again. This time it was S’busio Nkosi with the five point effort, hugging the left touchline after receiving Kwagga Smith’s offload. Jantjies was unable to convert this score, but that miss would only be a momentary blip on his radar.

The Lions flyhalf converted each of Cobus Reinach’s three first half tries. The Northampton Saints star opened his account in superb fashion, drifting past the Canadian defensive line before collecting his own chip to dive over.

He then latched onto the ball after yet another Snyman break to keep the foot on Canada’s throat and he completed his hat-trick after Jantjies' cross-field kick to Warrant Gelant found its way to De Allende and then the mercurial scrum-half.

South Africa’s sixth try in the opening 40 minutes came off the back of their dominant scrum with Gelant powering through three Canadian defenders to confidently get the Boks’ scoreline to 40-0 after Jantijes converted.

Things would go from bad to worse for Canada too. An early replacement, Josh Larsen, was shown red for using no arms at the ruck, connecting clearly with the head of Thomas du Toit. Still rattled by this late in the half, Canada gifted Frans Steyn a try when taking too long to exit after a scrum on their 5m line. Jantjies converted once more to make the score 47-0 at half-time.

Canada started the second half extremely well despite only having 14 men on the field. Consistently good carries in the South African 22 led to former Darlington flanker Matt Heaton driving the ball over low to score his first ever try for Canada. Peter Nelson converted.

It was only a momentary lapse of concentration from South Africa, though. Getting the ball back in their possession, quick ball got South Africa over the try line again. 38-year-old Schalk Brits received the ball some 10 meters out and stepped his way over the tryline, giving Jantjies another two points from the tee.

South Africa continued their dominance in the scrum and marked this with another try. Going through the hands of their backs after another well-executed set piece, Damian Willamse dived over the line before looking to the heavens after his late call-up. Jantjies converted to put the South African's over 60 points.

But the Boks weren’t done there. Frans Malherbe extended his arm over to register another South African try. This time Jantjies could not convert, but there was still some time to go. Unfortunately neither side would extend their individual scores, with the game finishing 66-7.

It is difficult to say exactly what Rassie Erasmus and his staff will have learnt from this game. So dominant at half-time, there was precious little left to achieve in this game. Only Cobus Reinach looked truly special, racing over the whitewash to score a hat-trick of tries in the opening 40 minutes.

Faf de Klerk is clearly the first choice scrum-half for the Boks, with Herschel Jantjies and Reinach battling to be the second choice in their position. It was also important for Erasmus to see Damian Willemse in action having only called up the youngster late last week. Playing at full-back in this gamem it became clear that Willemse is a dynamic option for his country if called upon.

Touching words from @Springboks captain @siyakolisi1 as he thanks Japan for the amazing support at #RWC2019#RSAvCAN pic.twitter.com/STAHoRwo4e

One area of concern will be the Springboks’ slow start to the second half. After allowing the Canadians to get ball in hand, something they didn’t do in the first half, Canada were allowed to briefly control the fixture, scoring a try through Matt Heaton as a result.

There should also be a special mention for Schalk Brits. At the age of 38, Brits looked in fine shape as he danced over the whitewash before being substituted around the hour mark with a calf strain of some sort. Hopefully we see him in action again at this World Cup. A truly magnificent rugby player.

Yet again, Canada seemed fairly hapless against a team clearly superior to them. Run ragged in defence by the South African’s in the first half, defence coach Richard Wigglesworth clearly rejigged some things at the break and Canada came out looking more confident and reassured.

Receiving a red card in the first half is never easy either, especially when the player who was dimissed was an early substitution. Josh Larsen is one of many Canadian players still getting used to professional rugby in MLR. As a result, it is difficult for players to be prepared for rhe Test match intensity like some experience against teams such as the All Blacks and Springboks.

It feels like repetition to say that Canada were never expected to beat the Boks or All Blacks. It was always more likely that they could beat Italy or Namibia. Having already lost to the Europeans, it is just their test against Namibia to come.