Scotland ease past Russia to set up showdown in Yokohama 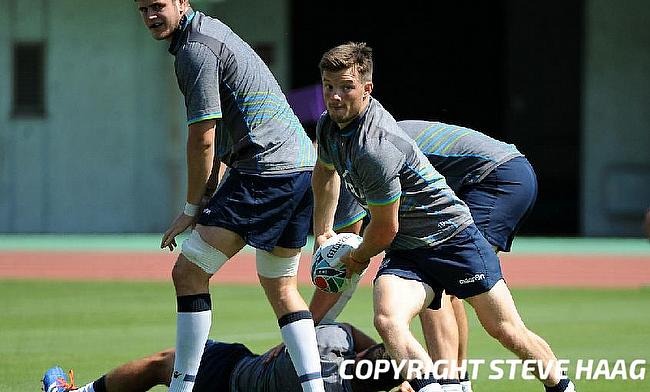 Fourteen changes were made to the Scotland starting XV for this match with only Darcy Graham remaining from the Samoa game.

The ‘big guns’ were rested in preparation for the big Pool A game with Japan, but first,, this team had to beat Russia with a bonus point. It was also a big opportunity for players to force their way into the starting team for Sunday’s match with the hosts.

Russia got off to a bright start and played the ball through a number of phases early on. Scotland did the same and as the game clicked past five minutes, it had been a breathless start with both defences working hard.

The Scots took the lead in the 14th minute when stand-off Adam Hastings, whose father Gavin and uncle Scott played in previous showpiece events, glided through to score a try which he converted.

Five minutes later he was at it again, putting a kick through, then kicking it on from the ground and, when the spin beat the unfortunate Russian captain Vasily Artemyev, Hastings dived on the ball to score. The same man converted and it was 14-0.

And in the 23rd minute it was 21-0 when, after a lineout on the Russians line, scrum-half George Horne intercepted opposite number Dmitry Perov’s pass to go over. Hastings again converted.

At that point it seemed as if Scotland would go on and get the bonus point fourth try before half-time, but their level of performance dropped a bit and, credit to Russia, they defended better before the break came.

Scotland did get the fourth try they needed in the 44th minute and it was made by winger Darcy Graham.

He fielded a kick in his own half and burst through a number of limp tackles before feeding George Horne for his second try. Hastings converted.

That was ‘job done’ as Scotland began to make replacements to wrap players in cotton wool before the game against Japan.

Tries five and six came before the hour mark when hooker George Turner and then winger Tommy Seymour went over. The latter came after a lovely kick through from full-back Blair Kinghorn and with Hastings converting both, it was 42-0.

George Horne became the fifth Scotland player to score a hat-trick of tries at a World Cup when, now playing on the wing, replacement scrum-half Henry Pyrgos set him up to dive over in the corner.

This time it was not converted and then George Horne had a fourth try disallowed due to a forward pass from replacement back-row Magnus Bradbury, but Scotland were still up 47-0.

In the last six minutes final tries came from captain for the night John Barclay and replacement and tour captain Stuart McInally as things finished 61-0.

Hastings thought he had bagged his hat-trick try as he clock went red, but Seymour’s scoring pass was deemed forward.

They needed five points and they got them with ease, the fourth try coming just after half-time.

With 14 changes to the starting team, players like George Turner, George Horne, Adam Hastings and Blair Kinghorn will have done their chances of being involved in the matchday 23 against Japan on Sunday no harm at all.

It was Horne who led the way with three tries and, with his brother Pete, also playing it was a proud day for the family from Cupar and for Hastings, he followed in family footsteps to score 26 points.

Perhaps most importantly for Scotland they did not suffer any injuries on the face of it and that is key given that they now have a quick turnaround before the final pool game.

This was a match too far for Russia.

In the first three pool matches they had looked competitive, but in this one, apart from a quick start in the first half, they were second best in every regard.

Once the Scotland backs got goingm the Russians were struggling to stop them and, in the second half, they began to fall off tackles as the last few weeks in the heat of Japan took their toll.

They can still be proud of their efforts in the event as a whole though.