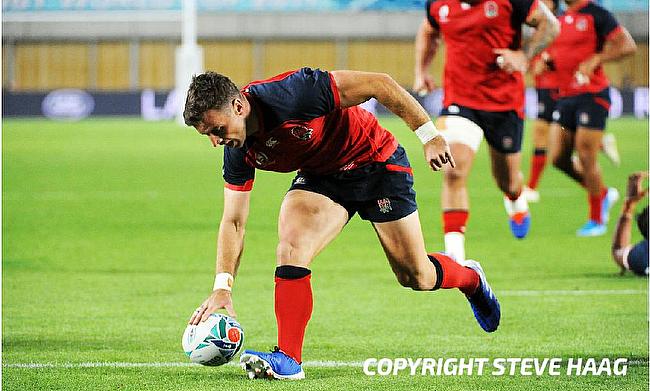 England have progressed to the Rugby World Cup quarter-finals have beating Argentina, who had Tomas Lavanini sent off. Ben Mercer gives TRU his verdict...

England marched to a comfortable win over Argentina in what can only be described as a tedious test in Tokyo.

Argentina were pumped up before kickoff, their subs and staff dancing and singing in the bowels of the Tokyo stadium as the team were led out by Pablo Matera.

After a fantastic start by Argentina where a Benjamin Urdapilleta crosskick led to a great break from Matias Moroni, England were on the back foot and only a fantastic cover tackle by Elliot Daly prevented Argentina from scoring a try during the opening stanzas.

After this, the game degenerated into a scrappy affair, capped off by the boneheaded high tackle on Owen Farrell from Tomas Lavinini that effectively took away any question about the eventual winners of the game.

Farrell only marginally stooped and Lavinini was too fired up, hammering the England captain in the head with his shoulder and deservedly receiving his marching orders. Nigel Owens had gone out of his way to avoid issuing a yellow card during the feisty opening exchanges but he was left with no choice here.

Tonight's win in Tokyo means we're the first team to qualify for the #RWC2019 quarter finals.

Even if the correct decision was made in this instance, watching this World Cup has been slightly marred by the constant bickering and questioning of decisions and you can almost sense the crowd appealing after every contentious incident.

Farrell must be regarded by rivals as extremely dangerous, extremely dislikeable or both but if he keeps drawing red cards from England’s opponents then Eddie Jones won’t mind one bit. Players need to lower their tackle height and Lavinini was merely the most recent culprit.

Daly was the standout player of the first half, shaking off some iffy recent displays and demonstrating why Jones sees him as so integral to England’s play with the variety of his play. He scored a deserved try when he rounded his opposite number Emiliano Boffelli, his juggle of the ball enticing his marker closer before a hitch kick and a change of pace took him away and over the line.

Jonny May had been put away by George Ford as Urdapilleta stepped in unnecessarily and the Argentinian standoff had a mixed bag, some classy kicks juxtaposed with some ill judged up and unders and he was removed before the end of the match, Nicolas Sanchez watching from the stands somewhere.

Ben Youngs’ box kicking was also somewhat off but he dummied over for a try just before the half, scooting past an obviously exhausted Pablo Matera. England’s NRL inspired structures were in evidence in the early buildup to this score, the handling of Daly and Billy Vunipola supplementing Ford and Farrell and enabling England to move the ball all over the field while having plenty of runners coming back at the ball. Then the forwards took over and ground down the remaining resistance from the Argentina defence.

The second half was much of the same, if even more disjointed and slow with Agustin Creevy coming on and causing a nuisance at the scrum and breakdown. Sam Underhill reminded everyone he was playing and gave some textbook demonstrations of how to tackle at a World Rugby mandated height, whacking everyone in sight. The disappointing Matera was cleaned out by Manu Tuilagi near the end when Argentina were threatening a breakout, Boffelli managing to shake off some rough treatment and posing a threat with his counter attacking.

"Totally aware of where he is, and where he's hitting" - @JonnyWilkinson

England cleared out their bench and gave minutes to the returning Mako Vunipola and Jack Nowell, the latter pinballing his way to a try after a great flat ball from Farrell who had managed to refind his radar after uncharacteristically missing four kicks in a row in the first period.

Nowell’s introduction was oddly reminiscent of Dan Luger becoming England’s 16th man as there was confusion about who was to be replaced. Argentina joined in with the sense of bewilderment by scoring a late try off the back of a lineout, exploiting Underhill’s desire to support his teammates in defence by switching play and bringing the blindside winger in with a smart inside ball. He put Moroni in for a score.

This was dull viewing for the most part and England did not look threatened at all after the red card, Ford controlling proceedings and notching up a try for himself into the bargain. They qualify for the knockouts and play France to decide who they’ll face in the quarter finals.

If you think back to 2003, England had already been tested in the group stage and Jones may be hoping that France will provide his team a sterner examination than they’ve faced so far while also keeping his fingers crossed that Billy Vunipola and Joe Marler haven’t sustained anything too serious, Marler limping off clutching his hamstring.

Again though, there’s a sense of something in reserve with England and even if there’s more to come from them, they’ll be pleased with how they’ve navigated this one. Argentina will be justifiably disappointed, particularly after giving France such a fright in the opener and they’ll head home after their final pool match. England are still hoping to go all the way and will head to face France in Yokohama with some confidence.