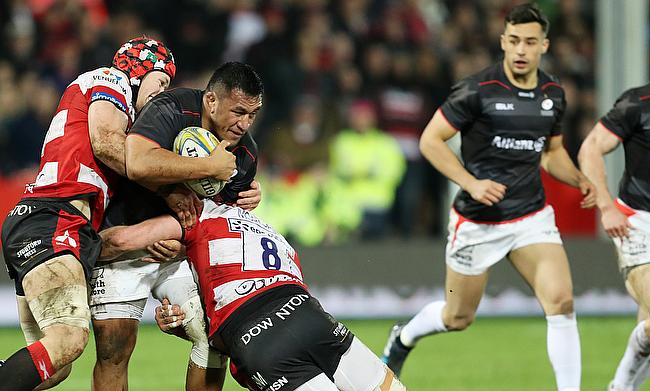 Gloucester held their nerve in the final 10 minutes as they sealed a 31-23 win over the defending champions Saracens in their Aviva Premiership encounter at Kingsholm on Friday.

This is Saracens' second consecutive defeat in the tournament after losing their previous game to Worcester Warriors and now find themselves at the second position with 49 points from 15 matches while Gloucester have made a rise to the eighth position.

The game also saw the return of England international Mako Vunipola, who featured for 70 minutes for Saracens before he was replaced.

Fly-half Billy Burns got Gloucester off the mark with a fifth minute penalty but Saracens grabbed the lead with a try in the ninth minute from Schalk Brits while fly-half Alex Lozowski and centre Marcelo Bosch contributed with a conversion and a penalty.

The scores were levelled when Tom Marshall rumbled past the post for Gloucester in the 17th minute followed by conversion from Burns.

Even though, Lozowski scored Saracens' second penalty to take a three-point lead, Burns replied back with two more penalties as the home team took a 16-13 lead at half-time.

Lock Jeremy Thrush extended Gloucester's advantage in the second with a touch down in the 48th minute and Burns was once again spot on with the conversion.

Things slowly shifted the visitors' way Paul Doran Jones was sin-binned in the 59th minute which was capitalised by a try from Saracens flanker Will Fraser and Lozowski's conversion levelled the score 23-23 as the game entered the final 10 minutes.

It was David Humphreys' side that held the nerve in the closing stages as centre Billy Twelvetrees and hooker Richard Hibbard scored a penalty and a try in the 73rd and 74th minute respectively to secure an eight-point win for Gloucester.