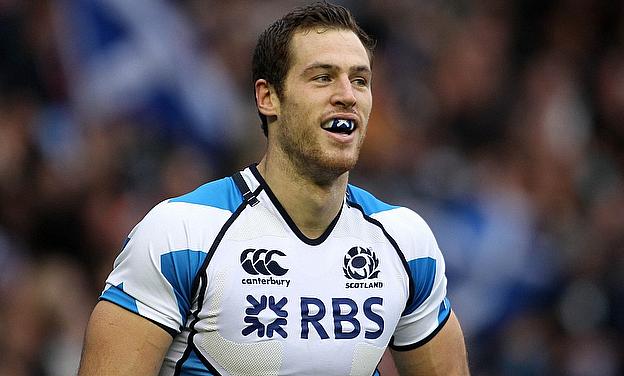 Scotland winger Tim Visser says a part of him will always feel Dutch - but admits pulling on the Dark Blue jersey can leave him close to tears.

The Edinburgh back was born in Zeewolde but qualifies for the Scots having spent three years in the United Kingdom with former club Newcastle and then the Gunners.

The debate on whether non-born and raised players should be able to play for Scotland was re-opened by Vern Cotter's decision to call up Visser's Murrayfield team-mate Hugh Blake for his RBS 6 Nations squad.

The 22-year-old only stepped off a plane from New Zealand in the middle of December and has yet to even play a senior game for his new side.

Visser, however, insists he will always be proud to represent his adopted nation.

He said: "Do I feel more Scottish or Dutch? I would probably say it's a good 50-50 split. I'm always going to be Dutch because that is where I was born - I'm a Dutch passport holder.

"But I feel very much part of the Scottish culture and I'm very passionate about representing Scotland, even to the point that I get quite emotional before matches at Murrayfield."

Blake does have Scottish ancestry courtesy of his Glasgow-born grandparents and Visser believes that while the rules allow both he and Blake to be selected, then Cotter should not think twice.

He said: "The most important thing is how much the player himself relates to Scotland.

"There are different ways of become eligible for Scotland now and every nation must play by the rules. It's the same for everyone.

"But I think it's very important that players coming here to play for Scotland want to play for the country and feel part of it.

"From a personal point of view I was here for three years before I got my chance.

"As long as the players have the right intention and it's within the rules, then it's fair."

Visser will hope to land a place in Cotter's line-up when he names his starting XV for the opening Six Nations clash with France in Paris on Saturday.

Scotland have gone 16 barren years since their last Championship success - and just as long without a win in the French capital.

But Visser believes it is time that run came to an end.

The "Flying Dutchman" - who scored the last time Scotland visited Paris - said: "We've not won in France since 1999 and that is a long time ago, so it's overdue.

"We've been doing things that people didn't think we could do in recent years - beating Canada away, Argentina home and away.

"But beating France in Paris would easily top that.

"It's a tough start for us in the Stade de France against a French team that will want to attack us. But it would be an incredible start for us if we could beat them over there.

"We need to take it one week at a time. We have got to look at France - that's a tough enough game to predict even in itself.

"If we manage to get a win over there that will be a fantastic start for us but that's all it is - a start.

"With how competitive the Six Nations is these days I don't think anyone can really predict who's going to win it."