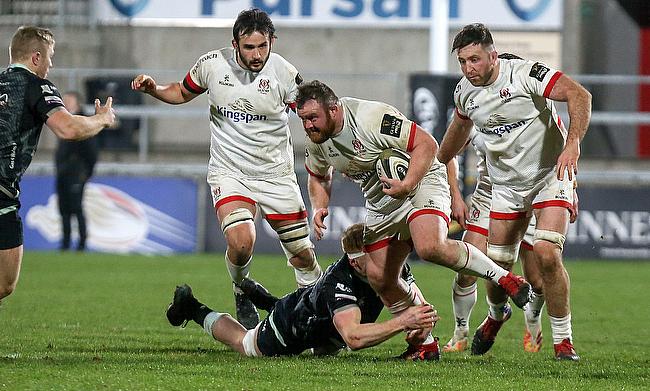 Match Centre: Ulster 21-7 Ospreys
Iain Henderson commits his immediate future with Ireland and Ulster
Match Centre: Glasgow 13-19 Ulster
Will Addison: A sports team can be the heartbeat of the city and in Belfast, that is Ulster

Ulster’s Andrew Warwick turns 30 on March 12th and this year, what he wants for his birthday more than anything else is a victory over Leinster in the Guinness PRO14 on Saturday evening.

The loosehead prop has played his part in recent weeks as Ulster have kept chipping away at Leinster’s advantage at the top of Conference A.

However, with just three regular-season games to go in the shortened campaign, they are six points behind their Irish rivals - and Warwick and Co know they cannot afford to lose this weekend.

The winners of Conference A and Conference B go through to the final at the end of March this year. There are no play-offs - so that makes the meeting of the two quality sides even more important than usual this time around.

Ulster’s Iain Henderson, Rob Herring and Billy Burns have been retained as part of Ireland's 23-man training squad, but Stuart McCloskey, Tom O'Toole, John Cooney and Eric O'Sullivan will be available and Jacob Stockdale is expected to get another run-out before an Ireland recall.

Leinster will have Ed Byrne, Ross Byrne, Rhys Ruddock and Josh van der Flier available for the trip to the Kingspan Stadium in Belfast but will be without 15 players who are in the Ireland training group.

“If we're going to prove to others that we're good enough, we have to beat Leinster,” Warwick told TRU.“All we can control is to try to win our next three games and hopefully, Leinster will slip up as it's obviously out of our hands now.

"For us to get to that next level, we have to beat them and we'll maybe not have a better opportunity than this week [given the number of Leinster players held back by Ireland].

“I think this year we are just a more consistent team than we have been in the past. We have progressed from a couple of years ago and the training every week is competitive. It is not just one-off performances we are putting out there. Every week, we are putting out good performances now and we want to continue that against Leinster.

“We have to respect how good Leinster have been in the last few years in the PRO14 and they beat us away earlier in this season [24-12 on January 8th], but we just have to block out the noise of everyone talking about them and focus on what we can do as a group.”

“I want to really try and better myself.”

When Warwick recently signed a new deal to keep him at Ulster until 2023, head coach Dan McFarland said: “He is a quality scrummager and a hard worker in the loose. Andrew adds a lot of experience and technical excellence to our team.”

Ballymena man Warwick made his Ulster debut way back in 2014 against Cardiff and has since made 130 appearances for them.

On the books, the club also have fellow looseheads Eric O'Sullivan and Jack McGrath, but Warwick wants to put his best foot forward in the coming weeks to try and keep hold of the number one jersey.

He keeps on trucking for another 2 years!!
Congrats Andy Warwick ???? https://t.co/JVhusnRBIM

“I'd say I worked hard to get to that point where the new deal came and I think I deserved it from a few of my performances,” Warwick, who can also play tighthead if required, said.

“I'm willing to push forward now and not just be happy to be sitting as second choice. I’m delighted to have extended my contract. It’s always a privilege to represent my home province.

“I look forward to continuing to do my part to help the team be successful and the coaches have created a great environment to help me keep improving as a player.

“It’s a really exciting time to be a part of this team, and I want to really try and better myself.”

“By March last year, it was getting bad”: The pain that ended up in surgery.

Warwick’s form over the last couple of months has been all the more impressive given that he had hip surgery in August.

“It was niggly and had been an issue since the summer of 2019 and I tried to play through it, but by March last year, it was getting bad,” he explains of the problem that forced him down the surgery route.

“I tried to rehab it, but it didn't do the job so I then had to wait until the middle of August to get surgery. Basically, my sciatic nerve in round my glute was getting caught and they had to release tissue putting pressure on it.

“Just before I decided to get the operation, it was really a decision on whether it would work or whether I would keep trying to play through it. Thankfully, I think I made the right decision.”

Ulster v Leinster in the Guinness PRO14 takes place this Saturday at 7.35pm and is live on Premier Sports.