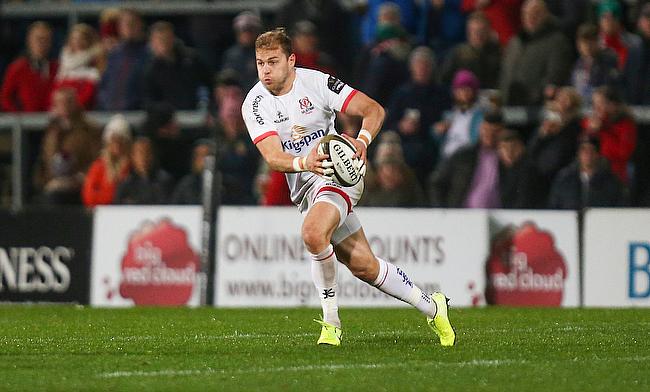 Pro14 targets resumption in August
Pro14 secures CVC Capital Partners investment
Dane Coles: “We respect all the decisions that have been made”
Josh Beaumont column: Dad is definitely the right man to steer World Rugby through this tricky period

Will Addison more than understands why sports clubs are so important to their respective communities.

Throughout his development, it is an aspect of the game which hasn’t been forgotten by the Ireland international, but since the coronavirus crisis, the role which sport plays within society has seemingly cropped up in more and more conversations.

The 27-year-old, who was into his second season with Ulster before the Pro14 and European campaign was paused, moved to Northern Ireland following nine enjoyable years at Sale Sharks.

The North-West of England is extremely passionate about its sport and Addison - who went on to captain Sale - can sympathise with avid supporters in the region, as well as thousands of faithful Ulster fans who currently have rugby absent from their lives.

“I am sport mad!” says Addison. “I always take the opportunity to watch anything live. Whether it’s cricket, football, NFL or tiddlywinks, I will have it on! Having played in Manchester for nine years, I would say football would be the number one sport there and I am sure the city will be crying out for the Premier League to start again as well as the Premiership for Sale, but obviously Ulster Rugby is massive in Northern Ireland.

‘Listen to the experts : Social distancing applies to all age groups, all people in Ireland. We need our younger generation to follow social distancing measures.’ #wearthegreenjersey #COVID19 #irelandscall

“It is a real bonding sport in Northern Ireland so it is a big miss not to have it. To not have 18,000 people coming through the gates at the Kingspan is missed by all. Having played in a football city, you really notice how much a sports team can be the heartbeat of the city and in Belfast, that is Ulster. The city is crying out for it at the moment, but I am sure everyone is willing to be patient for it to be back and hopefully it will be back for good.”

The uncertainty surrounding whether elite rugby will return became slightly more transparent for Ulster at the end of last week as the Irish Rugby Football Union (IRFU) confirmed plans for their provinces to play a series of fixtures against one another at the Aviva Stadium.

Their hope is to resume on 22nd August and the announcement would have pleased Addison who wants rugby to do everything it can to come back as long as it is safe and within the government’s guidelines. A return to training has been pencilled in for no later than 11th July and Addison is keen to see no stone left unturned.

“I am sure all the Pro14 coaches are in constant contact at the moment with the relevant people because I think there is no doubt when we do come back, we want it to be for a long period of time,” Addison says.

“We don’t want to go through a return which has to suffer setbacks so we all want to make sure it is safe to return back. I am sure rugby players will want to give it a crack but I am sure the authorities will take into account the opinions of the players just to make sure that when we get to the stage of coming back, all the parties involved are happy with it.”

On the phone from his family farm in Cumbria, Addison will be eager to return. At the beginning of lockdown, he and his partner Emma went back to his roots in the North-East of England and alongside milking cattle and heavy lifting on the farm, Addison’s new two-year contract at Ulster was also announced.

The centre joined Ulster at a similar time to current head coach Dan McFarland and since his arrival at the Kingspan, the province has certainly taken some positive steps. A domestic semi-final appearance and progress in Europe wasn’t a bad start for the former Scotland assistant coach and the vision which the club has made it a straightforward decision for Addison to sign on the dotted line.

“It has been a perfect fit to be fair,” Addison says. “I think it has been noted that I was in contact with the Irish set-up for a while whilst I was at Sale and for different reasons, it didn’t quite come about. I captained Sale and had a brilliant time there, but it felt the right time to move when I did especially when the offer came up to go to my home province in Ireland if you like, because it is where my family are from. Ulster were a team I watched when I was growing up.

“It is a club which has continually challenged for trophies and it still is and we have a really good group of young guys here. I am probably one of the older statesmen now! We have got a really good squad which probably has a decent amount of traction so hopefully we have got a good couple of years of potential success to come.

“Dan has impressed me massively since I joined. He was probably someone I wasn’t really aware of before I went to Ulster, but I can’t speak highly about how well Dan has done for Ulster and how enjoyable he is to work with. That was part of the easy decision to sign on again because Dan is here and he shares the same vision as I and the rest of lads do to go after titles.

“There is no stagnancy or anything like that. It is just really enjoyable and I think when you are enjoying your rugby, as well as your training, you hopefully get some success on the pitch as well.”

Signing a new contract less than two years after joining the club shows how much McFarland values Addison and the latter also revealed how ‘brilliant’ Ulster have been in terms of keeping players and staff connected throughout this lockdown period on both a professional and social level.

As for the non-rugby conversations, Addison feels he is slowly becoming a better cook after speaking to his nutritionist, but he admits it has been too easy to let his Mum, sister and partner use their culinary skills to rustle up some dishes whilst he has been back at home.

Road biking on the quiet roads of the Lakes is something Addison has also enjoyed alongside his mandatory training commitments, but the former Sale skipper has now returned back to Belfast with the resumption of the season hopefully less than two months away.

A new-look Pro14 is expected due to the league encompassing five countries across two different continents, but what is likely to be guaranteed is fixtures will be fulfilled behind closed doors.

In football, that protocol has been in place for two weeks in Germany’s Bundesliga whilst New Zealand’s Super Rugby Aotearoa will follow suit when the competition begins on June 13th.

For Addison, he understands the important role which Ulster’s fans play on a matchday but if rugby in Ireland can return in front of an empty stadium to begin with, he believes it would boost the morale of a community which has rugby at its heartbeat.

“Playing behind closed doors, I think it will be an opportunity to challenge ourselves mentally to see if we are strong enough to deal with an empty stadium and still motivate ourselves to play well,” Addison adds.

“I think you have just got to try and turn these negatives into positives and one of the positives could be back playing rugby so it is up to us to do it the best we can to give some sort of social uplift.

“That is why for me personally, I am desperate for us to restart and also because I really think we have a brilliant opportunity to do something special whether that is in the Pro14 or the Heineken Cup.

“In a selfish way, I do hope we start from where we left off and I know that is really difficult with the climate we have got at the moment, but we shall see. I’m desperate to get back on the pitch first of all and then hopefully play in front of the crowd at the Kingspan sooner rather than later.”