Victoria Rush Interview: 'Reading men say they want to be better at accepting women’s sports, that for me is special' 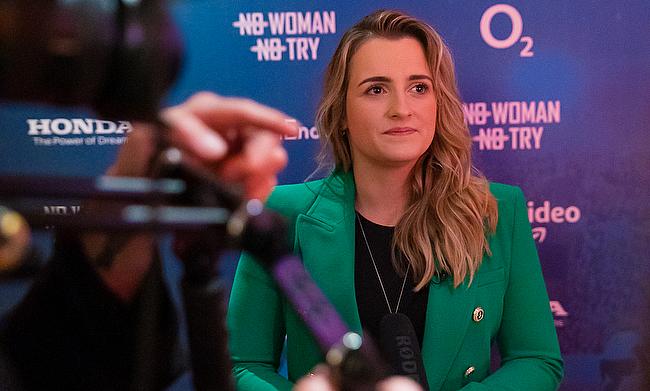 Simon Middleton Exclusive: Standout moments, England’s strength in depth and growing the game
Cara Cookland and Trudy Cowan Q&A: We have to fight for each game but we're getting a chance to build
Sarah Beckett Exclusive: 'It's probably been the toughest year in my career'
Women's rugby has shone over the last 12 months so what can the game achieve in 2022?

Last month, Amazon Prime released the film, No Woman No Try. The documentary directed by Victoria Rush focuses on the state of play in women’s rugby and the things women must overcome to reach the highest level.

TRU’s Elizabeth Cartwright spoke to Victoria about the film and her reasoning behind it, as well as the inspirational people who feature.

After the #IAmEnough movement went viral two years ago, Rush had a vision of taking the positive messages and translating them into a film:

“I wanted to take the message that empowered so many of the women in our sport, and translate it and its understanding of that feeling into something that could and would be seen by people who don’t have to deal with our experience as well as by people who are in positions of power and privilege who can make better changes and better visions.

@victoriahrush doing incredible things for our game. Listen to her on @GoodScazRugby talking all things ‘No Woman No Try’ documentary and pushing the game forward ???????? @Premier15s @EnglandRugby @EmilyScarratt @miketindall13 @Elmakapelma https://t.co/bjeTvQLNKg

“The reality is that social media is an echo chamber. We all see it and feel empowered but that doesn’t necessarily mean we make change. I really wanted to take all of that, the understanding of what we go through and deliver it to other people who aren’t in our world and who don’t go through what we go through.

“I wanted it to be something that’s accessible, whether it was on broadcast TV or on a platform. I just knew it needed to be something that predominantly men would be able to see and want to watch, that they wouldn’t feel attacked or blamed - but would actually feel empowered to be a part of that change."

When asked if Victoria felt it was the right moment to release the film, she believed that the timing was perfect, particularly given the Women's Six Nations is now in full flow and with the World Cup also on the horizon “I don’t think there could have been a better time for release than now.

“It’s helped that it was released just before the Women’s Six Nations because having their first purposely designed window is huge for the sport - there’s an attraction this year because they're playing at a different time to the men. It was important it came out just before the Women’s Six Nations began because it gave everyone a bit of a boost and lift ahead of the tournament.”

When the film was released on Amazon Prime last month, Rush had no idea it would have created such attention: “I’ve received so many messages of support since the film has been released. It’s been overwhelming.

“I’ve also had an awful lot of men message me. They’ve gone out of their way to tell me how it’s made them feel and what they want to do better.

“Our society doesn’t tend to allow men to let them tell you how they feel so the fact they’ve taken the time out to send me messages such as ‘I wish I was better’ and ‘I want to be a better male ally and to feel empowered to be part of that change’ - it’s great.

“I love that children are watching it together and feeling empowered to play the sport too. Reading men say they want to be better at accepting women’s sports - that for me is special.

“We've achieved what we wanted to, that was what we set out to do. It’s incredible how many people the film has inspired. I’m lost for words and struggle to explain it. It shows the power and the impact it’s had and I know I’m not alone in saying that. Everyone involved in the film has received similar messages. It’s insane and I hope it continues”.

“The film is an incredible opportunity to inspire others”

Alongside Rush - who features in the film - are a whole host of other stars within rugby, all of which have their own stories to share. They include Shaunagh Brown, Stef Evans, Zee Zainab, Sue Anstiss and ex England and Harlequins international, Ugo Monye.

"All of the people who are in the film are amazing and so are their stories," Rush continues. "Shaunagh is wonderful - she is great on camera and her personality shines through. None of those moments you saw in the film were scripted. We just allowed her to be whoever she wants to be. It's hugely important to show that character.

“When you look at men’s sport, you tend to see the scripted things they say. We’re not there yet with women’s sport though but because of that, you are able to share who these people are. Their real personalities are very inspiring. People that aren’t used to seeing Muslim women play sport can be a Muslim woman and play sport because they’ve seen Zainab on the TV.

All it takes is one special moment to inspire a kid for life ??#ENGvWAL | #RedRoses pic.twitter.com/1GllBQ0ZNP

“Ugo and Shaunagh have incredible personalities that continue to break down those barriers as black people in sport and as a male ally with Ugo. I think it’s an incredible opportunity to inspire others and having diverse talent in this film was incredibly important to me. It couldn’t have been a film only representing one demographic in our society because at the end of the day, sport isn’t about race and background, it’s about ability."

As the interview was drawing to a close, Rush discussed the possibility of seeing a sold-out Twickenham in 2025, if the RFU get the go ahead to host the World Cup.

England’s recent Six Nations meeting with Wales was played in front of a record crowd at Kingsholm whilst their hotly-anticipated clash with France at the end of month will be a sell-out.

“Anything is possible - I think we’ll see a sold-out Twickenham, I genuinely think we could do that,” Rush adds. “I think the fact that France v England will be a sell out on Super Saturday in two weeks time will give the players confidence and hopefully they’ll be young children there that have never watched a game before.

"They’ll see a packed stadium and future fans will come along as the next generation. Our game is reaching new heights, this is just the start.”

Watch 'No Women No Try' on Amazon Prime