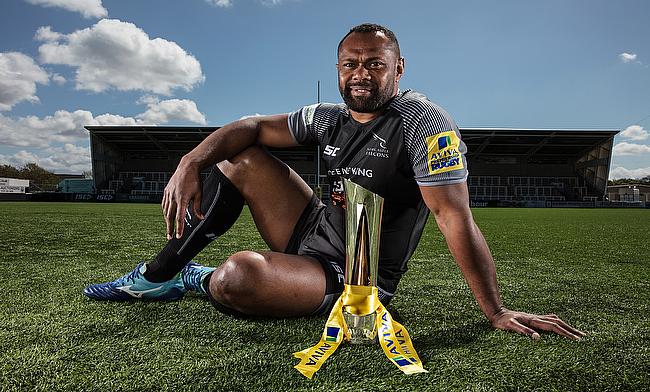 Newcastle Falcons are enjoying their best Aviva Premiership Rugby season since they lifted the title two decades ago, and it hasn’t gone unnoticed with Vereniki Goneva and Dean Richards tonight winning top prizes at the Premiership Rugby Awards 2018.

And he didn’t stop there as tonight he was named Aviva Premiership Rugby Player of the Season by a panel of judges, beating Danny Cipriani of Wasps, Don Armand of Exeter Chiefs, Sale Sharks’ Faf De Klerk and Jamie Gibson of Northampton Saints to the prize.

Goneva has been in stellar form for the Falcons as they claimed their first Aviva Premiership Rugby semi-final place in their history, scoring 13 tries to also walk away with the Top Try Scorer award, sharing it with Worcester Warriors’ Josh Adams.

And Newcastle’s success this year also saw Richards named Ricoh Director of Rugby of the Season as he prepares his side for their semi-final clash with Exeter on Saturday.

Talking about his and Goneva’s award, Richards said: “Niki is a very humble guy who will take no pleasure in being singled out for an individual award because he is very much a team-oriented person, although clearly he will be honoured to receive this accolade.

“Even in a season like we are having it is hard not to single him out when he has performed to such a consistently high level throughout, doing it time and time again, and he is right up there in the world class bracket for me when it comes to finishing.

“He defies the ageing process with the physical condition he keeps himself in, he is a phenomenal athlete but also has a thorough understanding of the game and how he can influence it.

“When I first met him for a chat two years ago in Betty’s Tea Room in Harrogate I couldn’t believe how fortunate we were to be signing such a quality guy as well as an amazing player.

“The way he carries himself as a person is just something else, he is very selfless in everything he does but it’s clear to everyone what an important player he is for Newcastle Falcons as a club and Aviva Premiership Rugby as a competition.”

There was another accolade for Newcastle to celebrate as Sinoti Sinoti’s sensational score against Exeter Chiefs in Round 13 was voted by the public as the Citizen Try of the Season.

Sinoti’s try was just one of 776 tries scored in Aviva Premiership Rugby this season – the most ever, beating the 750 tallied in the 1999-2000 campaign.

In addition, 6,379 points were scored, the most since 1999-2000, with Saracens’ Owen Farrell winning the Gilbert Golden Boot award with a total of 171 points with the boot.

A total of 535 different players were named in matchday squads for the 132 regular season Aviva Premiership Rugby matches, with the League once again proving a breeding ground for young talent.

This meant that the battle for the Land Rover Discovery of the Season was more closely fought than ever before, with Exeter Chiefs’ Sam Simmonds emerging triumphant.

Land Rover ambassador David Flatman helped judge the award and said: “It is easy to forget that this is only Sam Simmonds’ first full season of Aviva Premiership Rugby as he has been so good.

“He is so explosive on the ball, carries for fun and isn’t afraid to make tackle after tackle. He might not be as big as some other back rowers but he has freakish power.

“His form saw him propel himself into the England team and it didn’t take us judges long to choose him to win the award – it is thoroughly deserved for an amazing season.”

Another club on the winners’ board was Wasps who saw Josh Bassett named Singha 7s Player of the Season.

Harlequins prop Mark Lambert is well-known for his exploits on the pitch after 15 years at the highest level, but it was his commitment off the field that earned him the plaudits at the ceremony as he was named Aviva Community Player of the Season.

And to round off the night master of ceremonies Martin Bayfield announced the BT Sport Dream Team, honouring 15 players from eight different clubs.