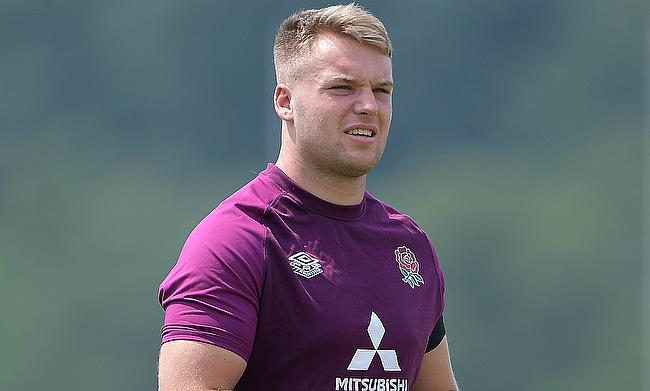 ‘Home of Golf’ becomes ‘Home of Scottish Rugby Captains’ for the summer
Lineen urges young players to make their mark like the ‘Class of 2020’ have done
Exclusive: Leeds Tykes' Dan Lancaster on his inclusion with England U20
Who of England U20’s 2020 EPS squad have progressed in the past 12 months?

England backed up impressive opening wins over France (38-22) and Scotland (31-12) with a victory in round three of the Under-20 Six Nations against Ireland on Thursday evening.

Openside Jack Clement led the way with a player of the match showing in a highly entertaining game, with England eventually coming out on top 24-15 at the Cardiff Arms Park to leave their Grand Slam bid intact.

No.8 Nahum Merigan’s converted try put England 7-0 up in the first half and after a really hard-fought 36 minutes, Irish winger Chris Cosgrave strayed offside close to the try line and was sent to the sin bin.

Ireland survived until half-time and, in fact, it was the 14-men who got on the scoresheet next when Nathan Doak kicked a penalty in the 43rd minute.

Two unconverted tries by Bath’s Ewan Richards seemingly put England in control at 17-3 up before his club teammate Merigan was yellow carded.

Straight away, Ireland took advantage to score a converted try through second-row Alex Soroka, however just before they were back up to a full complement of players, England scored the bonus point try.

It came from Harlequins’ hooker Sam Riley and, when Worcester stand-off Fin Smith converted, they were 24-10 to the good.

Ireland replacement Eoin de Buitlear wriggled over in the closing stages for an unconverted try before his teammate and fellow sub Daniel Okeke was yellow carded at the death after a breathless 80 minutes.

“Ireland are a quality outfit and they tested us in a lot of areas. Physically, we fronted up massively and we spoke about that all week and fair play to Ireland they took us to the line, but I’m really happy we got on the right side of it.

“At the end there, the character of the boys shone through and we showed how tight a group we are and how much we want to win this tournament.

“We’ve got two more big tests in Wales and Italy and we won’t underestimate their quality because they’re good teams and will challenge us in different areas.”

England head coach Alan Dickens added: “We played three games and I've been extremely proud of the boys in all three.

“We knew the Irish were going to come hard and I think we met them. We were solid in defence, very, very physical and the effort from the whole squad was outstanding.

“I've learnt how tight they are. Some of these boys have played with each other since under-16s and they grow close to each other and have bonds.

“If we put our game plan on the pitch, the score will take care of itself.”

Italy are now fourth in the table after they turned on the style to defeat Scotland 43-3 earlier in the day in the Welsh capital.

They had lost to Wales (25-8) in round one and then been edged out by France (13-11) in round two, but they showed what they are all about in this game.

Winger Flavio Vaccari raced in to cap a length of the field move after just five minutes before full-back Lorenzo Pani dotted down from Simone Gezi’s grubber.

Tighthead prop Ion Neculai bundled over to put Italy 23-3 up at the break before skipper Luca Andreani secured the bonus point. Scrum-half Manfredi Albanese also jinked his way over in the corner to continue a relentless display from Italy.

Mirco Spagnolo, the loosehead prop, also crashed over in this one-sided contest. The sore reverse leaves Scotland winless and bottom of the table after previous losses to Ireland and England.

Scrum-half - and captain - Nolann Le Garrec’s then led France to a 36-19 win over Wales.

Stand-off Thibault Debaes scored France’s fifth try after the break against a Welsh side that never gave up.

The result means France are now in third in the table on nine points, six behind England, while Wales are fifth with two games left.

What is to come?

Round four of the action takes place on Wednesday, July 7 and Italy and Ireland open up at 2pm.

Next up is France against Scotland (5pm) while England will be looking to stay unbeaten when they take on the host nation Wales at 8pm.

Round five comes on Tuesday, July 13 and England start off the day against Italy (2pm).

A tasty looking clash between Ireland and France is next at 4.45pm before Scotland and Wales round things off at 8pm.